FOCUS: North Korea's Kim may use South to boost influence of younger sister

North Korea's leader Kim Jong Un is expected to step up provocations against the South in an apparent bid to consolidate the status of his younger sister and close aide, Kim Yo Jong, as the country's effective No. 2 figure.

As announced, Pyongyang on Tuesday blew up a liaison office between the two Koreas in the nation's border city of Kaesong, in retaliation for Seoul's failure to prevent defectors from scattering over the border leaflets highly critical of Kim's reign.

The demolition of the symbol of inter-Korean reconciliation came weeks after the North's state-run media reported Ki Yo Jong, first vice department director of the Central Committee of the Workers' Party, has recently supervised policy matters relating to the South.

In North Korea, Kim Jong Un may be concerned that an economic deterioration and a lack of diplomatic progress, both of which have been attributed in part to the new coronavirus pandemic, could be eroding his political clout at home, diplomatic sources said.

Moreover, as there is no formally anointed successor to him, Kim Jong Un, whose health problems have been occasionally reported abroad, might become keener to designate the legitimate acting leader, should anything happen to him, they added. 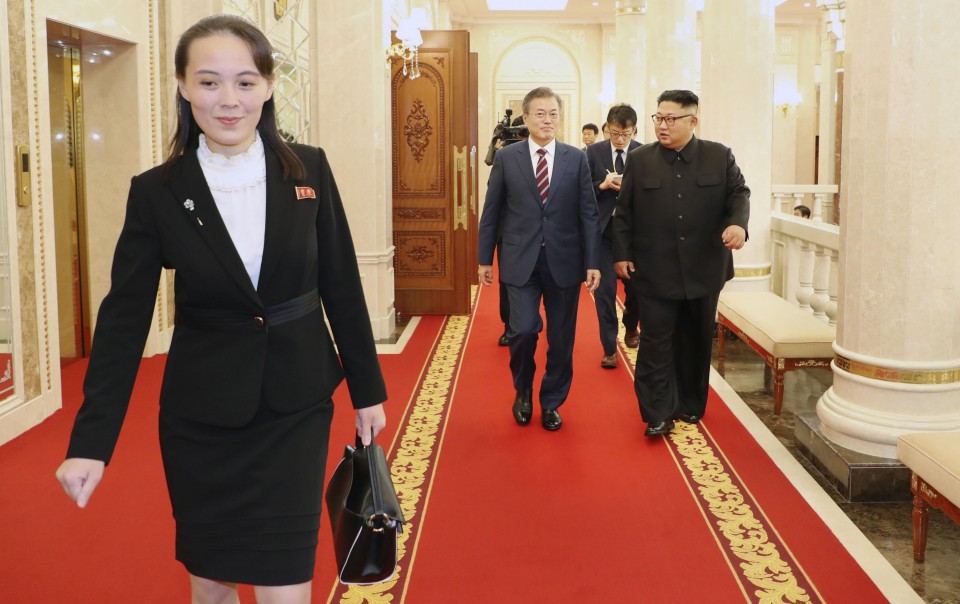 (North Korean leader Kim Jong Un (back, R) and South Korean President Moon Jae In (back, L) walk down a hallway at the headquarters of the Workers' Party of Korea in Pyongyang before their talks on Sept. 18, 2018. Walking ahead of them is Kim Yo Jong, Kim Jong Un's sister and a senior official of the North's ruling party)[Pyeongyang Press Corps][Kyodo]

"As the economy has been hit hard by the outbreak and its denuclearization negotiations with the United States have shown no sign of going forward, North Korea is now seeing South Korea as a good target to attack," one of the sources said.

"Kim Jong Un is unlikely to soften his stance toward South Korea for the time being as he could be trying to bolster the influence of Kim Yo Jong as well as to tighten his grip in the country to maintain the North's hereditary succession," he added.

On Saturday, Kim Yo Jong signaled the end of the inter-Korean liaison office, saying in a statement carried by the official Korean Central News Agency, "I feel it is high time to break with the South Korean authorities."

Urging Seoul to take necessary measures to stop defectors from North Korea airdropping leaflets lambasting Pyongyang, Kim Yo Jong has also threatened to scrap a military pact with the South.

Earlier Tuesday, North Korea warned that it has been preparing to send troops to the Demilitarized Zone dividing it from the South, underscoring that the effect of their military agreement has already become precarious.

"Kim Jong Un seems to really trust his sister. It is obvious that he would like Kim Yo Jong to work as a right-hand woman and he is using South Korea as a tool to boost her stature in the nation," the diplomatic source said.

At their summit in April 2018, Kim Jong Un and South Korean President Moon Jae In signed the Panmunjeom Declaration, in which they pledged to establish a joint liaison office and cease all hostile acts, including the flying of leaflets.

In September that year, the two Koreas agreed a series of steps to reduce tension on the border, such as disarming the Joint Security Area in the Panmunjeom border village and removing some guard posts and weapons within the DMZ.

Panmunjeom was the only place along the border where troops directly faced each other. The demilitarization was completed in October 2018.

In November 2017, North Korea fired what it said was its "most powerful" intercontinental ballistic missile capable of delivering a nuclear warhead to anywhere in the United States, with Kim Jong Un declaring the completion of "the state nuclear force."

On Jan. 1, 2018, he surprisingly extended an olive branch to the South in his New Year's address and later in the year, promised to attain "complete denuclearization" of the Korean Peninsula.

At the first-ever U.S.-North Korea summit in Singapore in June 2018, Kim Jong Un obtained an agreement from U.S. President Donald Trump that Washington would provide security guarantees to Pyongyang in return for its denuclearization.

Calling himself a "broker" between North Korea and the United States, meanwhile, Moon had expressed his eagerness to help promote their nuclear negotiations, but so far he failed to make any achievement.

Ultimately, Pyongyang has fallen short of convincing Washington to ease sanctions that have stifled the country's trade, while Seoul has hesitated to proceed with economic cooperation projects with the North in the face of opposition from the United States.

North Korea's economy is also believed to be contracting as trade with China, its closest and most influential ally in economic terms, has become stagnant due largely to the closure of the border with its neighbor following the global virus spread.

In the run-up to the 75th anniversary of the founding of the ruling party in October, Kim Jong Un "has not particularly produced successful results regarding diplomatic and economic policies," another diplomatic source said.

"I think Kim Jong Un has been very angry with Moon Jae In. To accomplish his several goals, North Korea looks set to continue adopting a tough attitude to South Korea," he added.