Nissan Motor Co. CEO Makoto Uchida apologized to disgruntled shareholders Monday for massive losses and foregoing a fiscal 2019 year-end dividend payment, vowing to put the struggling automaker back on a "growth path" through restructuring and focusing on core markets and technologies.

"Nissan will reorganize excess assets and sustainably pour in resources into our core markets" of North America, China and Japan, Uchida told a general shareholders' meeting. "By cutting fixed costs significantly, we will aim for a reliable recovery and steady growth." 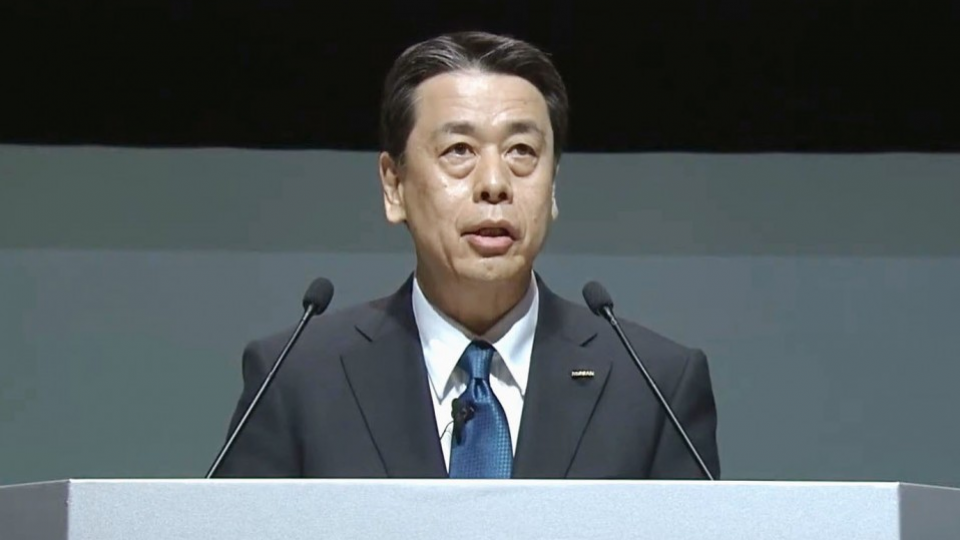 Nissan Motor Co. President and CEO Makoto Uchida speaks during a general shareholders meeting at the company's head office in Yokohama, eastern Japan, on June 29, 2020. The struggling automaker held the shareholders meeting a month after reporting a net group loss of over 670 billion yen in the year ended in March 2020 partly due to reduced demand amid the coronavirus outbreak. (Kyodo)

Uchida was bombarded with harsh criticism from shareholders, who questioned the carmaker about its strategy to recover its share price, future dividend policy and earnings outlook.

One shareholder said, "Nissan will disappear in two years if it goes on like this. It needs strong leadership." Another said, "What Nissan still lacks the most is trust among consumers and the public" following the arrest of former boss Carlos Ghosn in 2018 over financial misconduct.

Nissan fell into a loss of 671.22 billion yen ($6.27 billion) in the fiscal year ended March, its first full-year red ink in 11 years, as years of expansion pursued by ousted boss Ghosn hit profitability and the coronavirus pandemic dealt a further blow to sagging global vehicle sales.

The red ink neared the scale of its 684.36 billion yen loss in fiscal 1999, when Ghosn was sent from Renault SA of France to rescue the Japanese automaker from the brink of bankruptcy.

For fiscal 2019, the automaker also booked around 600 billion yen in restructuring efforts, including the planned closure of plants in Indonesia and Barcelona and a reduction in its global workforce.

It also said it will cut annual production capacity by 20 percent to around 5.4 million vehicles from 7.2 million in fiscal 2018. In fiscal 2019, its global vehicle sales fell 10.6 percent to 4.93 million units.