Both students and company officials feel that online recruitment, introduced amid the novel coronavirus pandemic, fails to provide adequate information about what companies are actually like, a survey conducted by university students shows.

The survey of students and recruitment staff who have experienced online interviews for new graduates also pointed to an increased risk of employees quitting jobs early on in their careers.

The results were compiled by Reita Shibai and Tomofumi Sato, students of Rikkyo University in Tokyo who were seeking jobs during the survey period and eventually secured job offers.

In the survey, only 43.4 percent of students and 55.1 percent of company staff in charge of recruitment said that online interviews aided applicants in getting a grasp of working in a company. 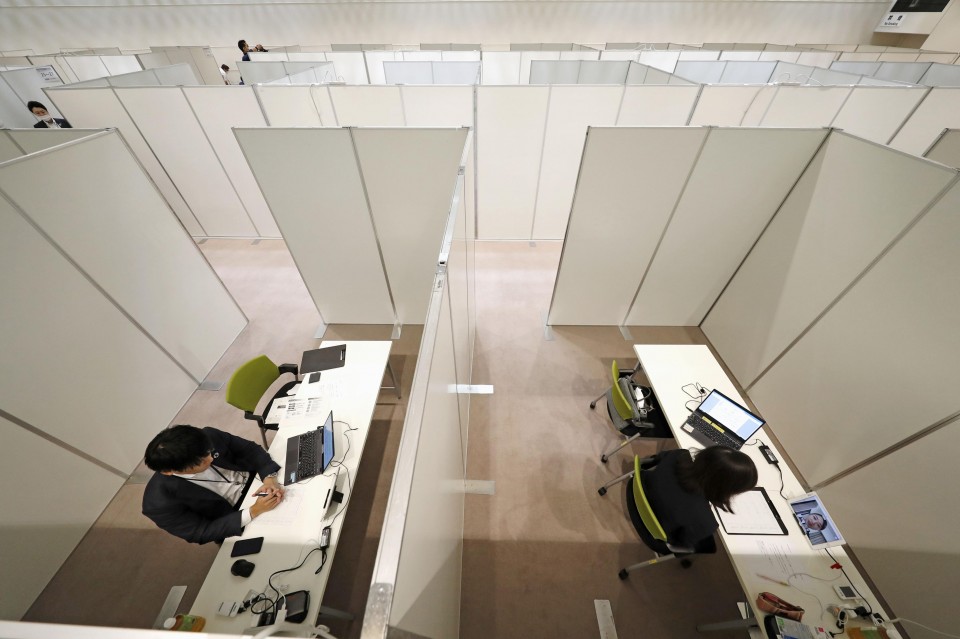 Mitsui Sumitomo Insurance Co. interviewers hold online meetings with students in Tokyo on June 1, 2020, the government-set start day for companies to hold interviews with job-hunting college seniors. Many companies have switched from face-to-face meetings to online interviews amid continuing worries about the new coronavirus. (Kyodo)

The figures were 35.1 percentage points and 23.7 points lower than those for in-person interviews.

The students and company officials responded that it was harder to get a feel for the atmosphere of a company, including job descriptions and what kind of people were working there, through online recruitment.

Most companies have switched to online rather than in-person seminars and interviews in response to the spread of the coronavirus.

As of May 3, when the entire country was under a state of emergency, 95.6 percent of the companies surveyed had conducted first-round interviews online, while 58.1 percent had completed their hiring processes online including final interviews.

But the online interviews tended to be shorter than face-to-face meetings, as interviewers were not accustomed to them and asked less complex questions.

In the survey, 51.1 percent of interviewees said they were anxious about showing their personal space to recruiters, while 14.7 percent of company officials expressed concern that interviews would be recorded and leaked to social media.

On the bright side, company officials responded that online recruitment saved time and money, and helped attract many applicants from various parts of the country as there was no need to worry about transportation.

The online survey, conducted between late April and mid-May, received responses from 232 students and 176 company officials.

Jun Nakahara, a Rikkyo University professor who oversaw the survey, said while it was limited in scope it showed the challenges raised by online recruitment.

"Next year's new employees do not have a clear image of their jobs because of the shorter-than-usual job hunting period. Companies should provide orientation that will enable them to better understand what their companies and jobs are like," the human resource management professor said.