Prime Minister Shinzo Abe announced Monday that the state of emergency declared over the novel coronavirus crisis is over in Japan, ending curbs on economic activity in Tokyo and four other prefectures as experts judged the spread of infections is now under control.

Abe lifted the state of emergency that had been in place since April for the Tokyo metropolitan area including Chiba, Kanagawa and Saitama prefectures, along with Hokkaido in northern Japan, about a week earlier than its scheduled end. But he warned that a re-imposition is possible if infections spike.

With the removal of the restrictions imposed under the state of emergency, the recession-hit Japanese economy is still expected to regain vigor, albeit at a gradual pace. The five prefectures account for about a third of the country's gross domestic product.

"I have decided to end the state of emergency across the nation," Abe told a televised press conference. "In just over a month and a half, we almost brought (the infection) situation under control."

"The lifting of the emergency does not mean the virus is gone or infections are down to zero. Our battle against the virus will continue," Abe said as health experts call for continued vigilance against a second or third wave of infections.

An advisory panel gave the go-ahead to the government plan to end the emergency earlier in the day after examining the number of newly reported cases over the past week, the availability of medical resources, and the capacity to provide virus tests and monitor the spread of the virus.

Abe has been weighing the need to keep new infections under control against the urgent need to rejuvenate the economy as the number of newly reported coronavirus cases has been on a downward trend.

Instead of keeping strict restrictions and asking people to reduce contact with others by 80 percent, Japan needs to explore a new way of gradually raising the level of social and economic activities by taking proper virus prevention steps, Abe said.

While the infection situation has stabilized, Abe's political capital has apparently waned in recent months, as the prime minister has come under fire for his crisis response that critics say is insufficient and out of touch with the public. Adding to his woes, a top prosecutor resigned last week for gambling on mahjong during the state of emergency.

As many households and businesses are increasingly feeling the pain from the coronavirus epidemic, the government will almost double the size of economic stimulus to more than 200 trillion yen ($1.9 trillion), equivalent to about 40 percent of Japan's GDP, as Abe pledged to protect companies and jobs.

Economic revitalization minister Yasutoshi Nishimura said the government will establish a transitional period and assess the infection situation every three weeks, meaning requests for people to stay at home and avoid large gatherings may be eased only gradually.

People will be asked to refrain from crossing prefectural borders for the rest of the month and the request will be relaxed in stages until it ends on June 19. 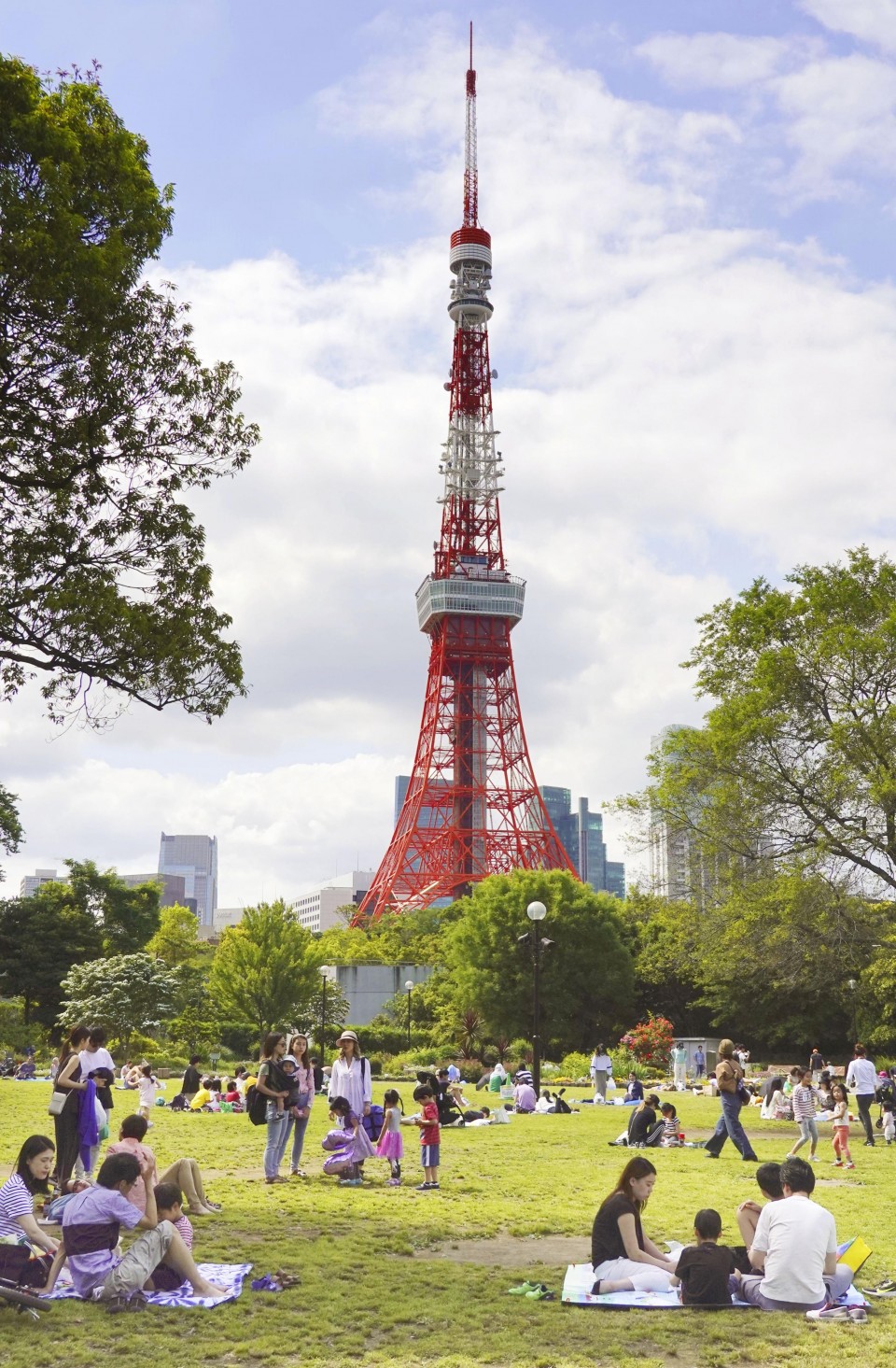 People visit Shiba park in Tokyo on May 24, 2020, with Tokyo Tower seen in the background. The Japanese government will announce the lifting of the coronavirus state of emergency in the Tokyo metropolitan area and Hokkaido as early as the following day. (Kyodo)

The Tokyo metropolitan area has been hit hardest by the coronavirus in Japan, with the nation's capital of around 14 million people reporting more than 5,100 cases, the largest among the 47 prefectures. Tokyo confirmed eight new cases on Monday.

One benchmark used by the government and experts is whether new infections have fallen below 0.5 per 100,000 people in the past week and all but two prefectures -- Kanagawa and Hokkaido -- have cleared that threshold.

The state of emergency gave prefectural governors legal authority to request people to forgo nonessential outings and businesses to suspend their operations, even though Japan cannot legally enforce a hard lockdown similar to those implemented in Europe and the United States.

Japan is lifting the coronavirus emergency declaration roughly seven weeks after it was enforced in Tokyo, Osaka and five other urban areas on April 7 for one month. The measure was then expanded to all 47 prefectures and extended until May 31.

Before the expiry, 39 prefectures were exempted on May 14, followed by Osaka, Kyoto and Hyogo in western Japan last Thursday as the spread of the virus had been kept in check.

In the first phase, which will likely begin Tuesday, museums and libraries will open while restaurants and eateries will be allowed to stay open until 10 p.m., later than 8 p.m. as permitted under the emergency declaration.

The second phase may begin by the end of the month, metropolitan government sources said, enabling more facilities such as movie theaters and shops selling products other than daily necessities to reopen.

However, karaoke parlors, live music venues and gyms -- places where the risk of group transmission is high -- will be asked to remain closed.

Japan has so far avoided an explosive surge of virus infections with over 17,200 cases and 853 deaths reported across the nation. The tally includes about 700 infections from the Diamond Princess cruise ship that was quarantined off Yokohama in February.

Chronology of major events related to coronavirus and Japan

May 4 -- State of emergency extended until May 31.

May 14 -- Abe lifts state of emergency in 39 of Japan's 47 prefectures, including five classified as requiring "special caution."

May 21 -- State of emergency lifted in western Japan prefectures of Kyoto, Osaka and Hyogo.