A month at home in isolation may seem like an eternity for those unaccustomed to a lack of person-to-person contact, but the experiences of Japan's large numbers of "hikikomori," or social recluses, may offer some hints on how to stay sane during the coronavirus pandemic.

Japan's health ministry defines hikikomori as people who have remained isolated at home for at least six consecutive months, not going to school or work and not interacting with people outside their family. According to government studies, there are an estimated 1 million or more hikikomori in Japan.

Although people have started to use the term more loosely to describe themselves hunkering down at home to aid in stemming the spread of COVID-19, most social recluses spend years, sometimes decades, in isolation.

Nito Souji, who has been a hikikomori for more than 10 years, stresses the importance of keeping focused on the big picture and taking each day as it comes. 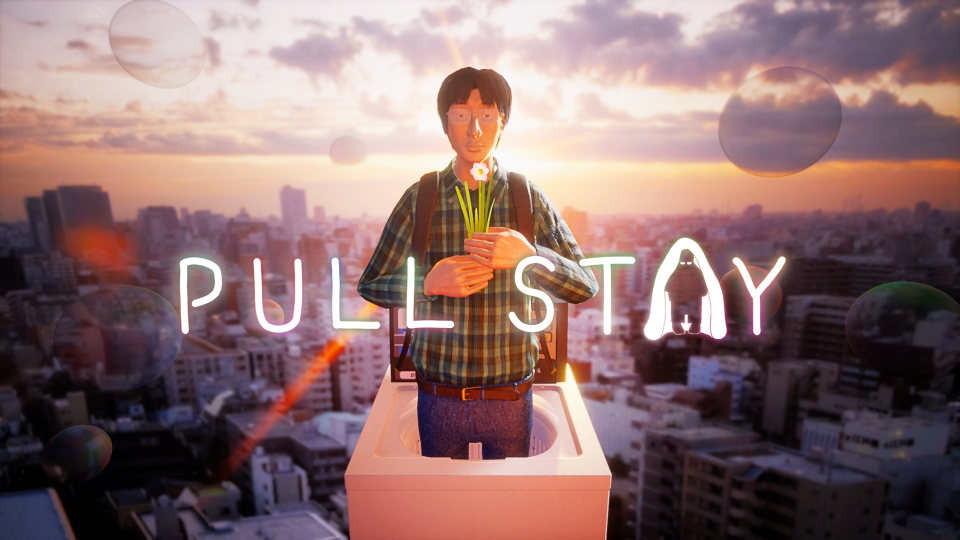 (Supplied photo shows the official logo for Pull stay, a game developed by Nito Souji during the past five years of his hikikomori life.)
[Photo courtesy of Nito Souji]

"I became a hikikomori with the objective of living everyday doing only things that are worthwhile, so for me the past 10 years have been far more pleasant than working outside," he said.

Unable to land a good job after graduating from university in Tokyo or realize his dream of becoming a novelist, Nito returned to his hometown to practice drawing in the hopes of becoming a creator of "dojinshi," or self-published comics and other works. He had initially only planned to remain a hikikomori for three years, or until he could support himself.

"I had no friends in my hometown and felt rushed to become financially independent as soon as possible, feeling ashamed to go outside. So I became a hikikomori," he said, now living alone in his aunt's apartment in Kobe, Hyogo Prefecture.

Nito's dream of becoming self-sufficient through his own creations eventually spurred him to learn English and game development from 2015, where he has devoted his efforts for the past five years. Now with fluent English skills and his first original game set to launch on Steam, a video game digital distribution service for independent developers, his hard work appears to have paid off.

"In the last 10 years, I was able to create whatever I wanted to create, so even if there were struggles, I enjoyed it," he said.

Pull Stay, which is a literal English translation of "hikikomori," is a game inspired by Nito's experiences as a shut-in and features a protagonist modeled after himself. 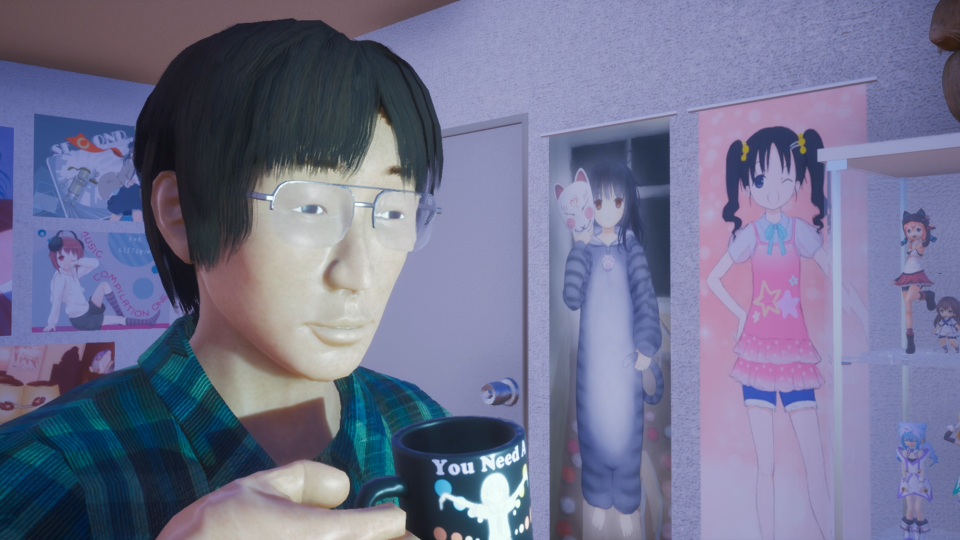 Nito said he hopes sales of the game will generate enough revenue to enable him to finally emerge from his seclusion and try life as a nomad worker once COVID-19 blows over.

"Having hope and making a little progress every day. That worked for me," he said.

Meanwhile "CLiONE," a self-professed hikikomori DJ based in Tokyo who also began the reclusive lifestyle to focus on his passion, suggested connecting with people online as a way to overcome loneliness during self-isolation.

"No matter what sort of person you are, communicating with other people leads to a reduction in stress. If you mull on things alone, your thoughts tend to take a bad direction, so even talking with friends over the phone can change your mood," he said.

For the past two or three years, CLiONE has spent most of his time alone at home, producing original music and remixes and occasionally taking on jobs from crowdsourcing platforms. And because he only holds performances through live streaming on YouTube, where he has over 13,000 subscribers, his activities already follow social distancing rules.

Inspired by Marshmello, an American electronic music producer and DJ who wears a marshmallow mascot head, he dons a custom cartoon head during live streams to keep his appearance a mystery. 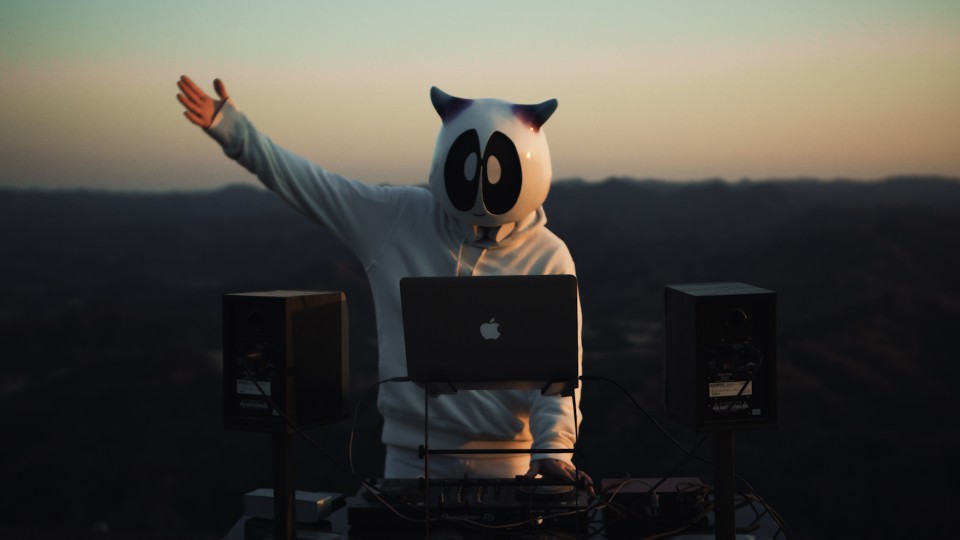 (Supplied photo shows CLiONE, a hikikomori DJ based in Tokyo, donning a custom mascot head to keep his appearance a mystery during music videos and live streams on YouTube.)
[Photo courtesy of CLiONE and Jinofilms]

But he said interacting with fans through live streaming provides him some relief from the depressing coronavirus-related news bombarding the world daily.

"Even for people like me, with few friends, you can talk to strangers you've never met before through online games and live streaming. So I recommend connecting with others online," he said.

"Shin," a 35-year-old who spent four to five years as a hikikomori in southwestern Japan from around the time he was 21, felt little stress from being alone but said doing things he liked helped.

"If I did feel stress at the time, I would watch action movies. Also, even just moving my body while indoors helped me alleviate stress to a certain degree," he said.

Unsuited to Japanese work culture, Shin cites sleep deprivation and overwork at a game company he entered following graduation as the trigger for his shut-in behavior. Isolating at home helped him to recalibrate his life.

"At first, I spent every day just sitting and staring out the window. Besides going for treatment and taking walks with my mother, I was always in the house. I used the computer often, so I wasn't lacking in study or entertainment," he said.

Although Shin eventually pulled himself out of the hikikomori life at around 26 or 27 with the help of a nonprofit organization recommended by his father, he still spends most of his time at home.

Now living in Fukuoka Prefecture with his American wife, Shin makes money as a freelance programmer. The couple occupy themselves by playing co-op games, watching movies together and drawing or coloring.

"If I were still a hikikomori now, I don't think what's happening outside would change me. But I would probably blame myself for not being able to help my family despite being worried about them," he said.

For Nito and CLiONE as well, the Japanese government's request to stay at home has been a breeze.

"I've used a weekly grocery delivery service for a while now, so I don't even need to go to the supermarket. So I really don't leave the house. I come out maybe once or twice a week to take out the trash," said Nito.

Nito said his haircut schedule is the only thing that has been directly affected by the pandemic. Usually the only reason he ventures out into the city once every two months, he elected to find one in his neighborhood instead last time due to virus fears.

"I don't really want to go for my next haircut. I've always been prone to colds and my body has further weakened due to the hikikomori life. So I'm thinking of cutting my own hair next time," he said. 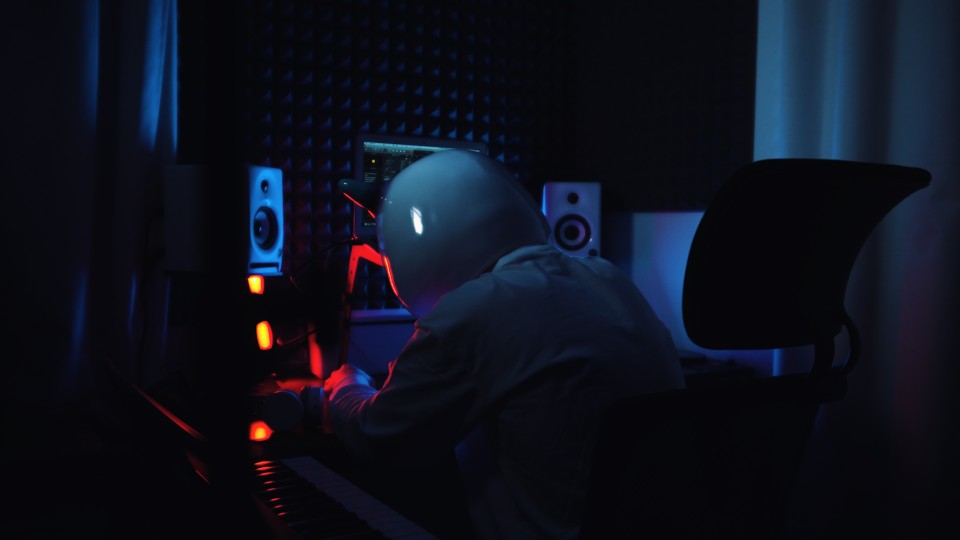 (Supplied photo shows CLiONE, a hikikomori DJ based in Tokyo, who has led a reclusive life for the past two or three years to focus on his music business.)
[Photo courtesy of CLiONE and Jinofilms]

With technological advancements making it possible for CLiONE to conduct all facets of his music business online, the pandemic has also had little impact on his daily life.

"I don't usually go out, so my lifestyle rhythm was not affected very much by the state of emergency declaration," he said, referring to Prime Minister Shinzo Abe's announcement for Tokyo and six other prefectures on April 7, which was later extended nationwide.

CLiONE, meanwhile, predicts that the move to a virtual life may not be fully reversed. Virtual reality and live streaming will play an important role in the world "after Corona," since people's aversion to close contact will likely linger even after the virus is contained, he argues.

"There's a chance that artists won't be able to hold live performances and shows like before," he said.

In this regard, not just for hikikomori and introverts, but for all people, using technology to maintain a sense of togetherness has become more important than ever.

"You may feel scared at first, but if you courageously take the first step your human connections will expand, and you will feel that you aren't so alone," said CLiONE.