Bank of Japan prodded to act amid virus spread, but policy options limited

Market participants have started to prod the Japanese central bank to take action, as the country's economy, the third largest in the world, is certain to suffer serious setbacks in the wake of an outbreak of the new coronavirus.

But the Bank of Japan, which has failed to bolster the economy and achieve its goal of 2 percent inflation despite its years-long drastic monetary easing, is likely to struggle to map out effective steps to grapple with the adverse effects of the virus spread.

With fears escalating about a global pandemic of the virus, financial markets are reeling. On Monday, the benchmark Nikkei index plummeted over 1,000 points, or more than 5 percent, and the U.S. dollar briefly fell to its lowest level since November 2016 against the safe-haven Japanese yen.

A plunge in Tokyo stocks is expected to blur the outlook for the Japanese economy as well as deteriorate business and consumer sentiment at home, while the yen's sharp appreciation may drag down the nation's exports, a key driver of economic growth.

Many Japanese smaller companies in the tourism, retail and other services sectors have encountered bankruptcy risks, as the epidemic of the new pneumonia-causing coronavirus has disrupted supply chains and has decreased the number of visitors to Japan from China.

The Japanese economy may be hit harder by the latest virus outbreak than by the aftermath of the 2008 global financial crisis or a magnitude 9.0 earthquake and ensuing tsunami that triggered the Fukushima nuclear disaster in March 2011, some analysts warn.

As virus infection cases have been rising in Japan recently, "more firms could unnecessarily go bankrupt ahead," a credit dealer at Mizuho Securities Co. said, adding, "The BOJ should act soon."

Against a backdrop of a 2-percentage-point consumption tax hike to 10 percent in October last year, Japan's economy shrank an annualized real 7.1 percent in the three months through December, its sharpest slide in more than five years.

Meanwhile, the diffusion index in February of sentiment among "economy watchers" with jobs sensitive to economic trends, including taxi drivers and restaurant staff, dove 14.5 points from January to 27.4, its worst level in about nine years, the Cabinet Office said.

"A possible downturn in corporate profits would reduce payments of workers, weighing on domestic demand additionally," said Shunsuke Kobayashi, a senior economist at the Daiwa Institute of Research.

"We can't help but say that the possibility is increasing that the growth of the Japanese economy will lose momentum in the medium term," he added. 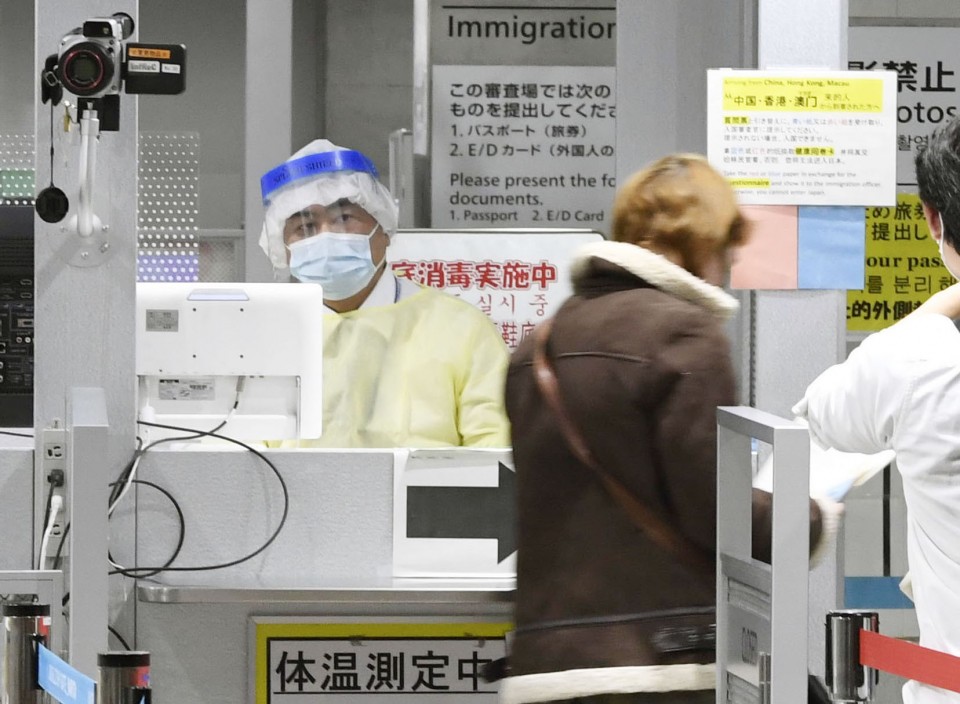 (An official in protective gear at Narita airport near Tokyo checks passengers arriving from South Korea on March 9, 2020.)

In other developed economies, the U.S. Federal Reserve last week conducted its first emergency interest rate cut since the global financial crisis, following an urgent conference call among finance chiefs from the Group of Seven industrialized countries on March 3.

The European Central Bank is also set to lower its deposit rate, charged on commercial bank deposits at the central bank, to minus 0.5 percent from minus 0.6 percent on Thursday. The Reserve Bank of Australia has cut interest rates to a record low of 0.5 percent.

To discuss how to tackle the yen's rise, which usually damps exports by making Japanese products more expensive abroad and eroding overseas revenues in yen terms, senior officials of the BOJ, the Finance Ministry and the Financial Services Agency gathered Monday.

The Japanese central bank, however, has few policy weapons left in its arsenal to alleviate market volatility, given that it has carried out what its Governor Haruhiko Kuroda calls monetary easing of a "different dimension" since he took office in early 2013.

The BOJ already owns around 50 percent of outstanding Japanese government bonds of about 1,000 trillion yen ($9.73 trillion), while pledging to buy 80 trillion yen of them per year. It has also bought nearly exchange traded funds.

Further cuts in the negative interest rate of minus 0.1 percent, which have pushed down longer-term interest rates for years, are expected to snap the profitability of the banking sector and hurt returns for insurers and pensions of private companies. 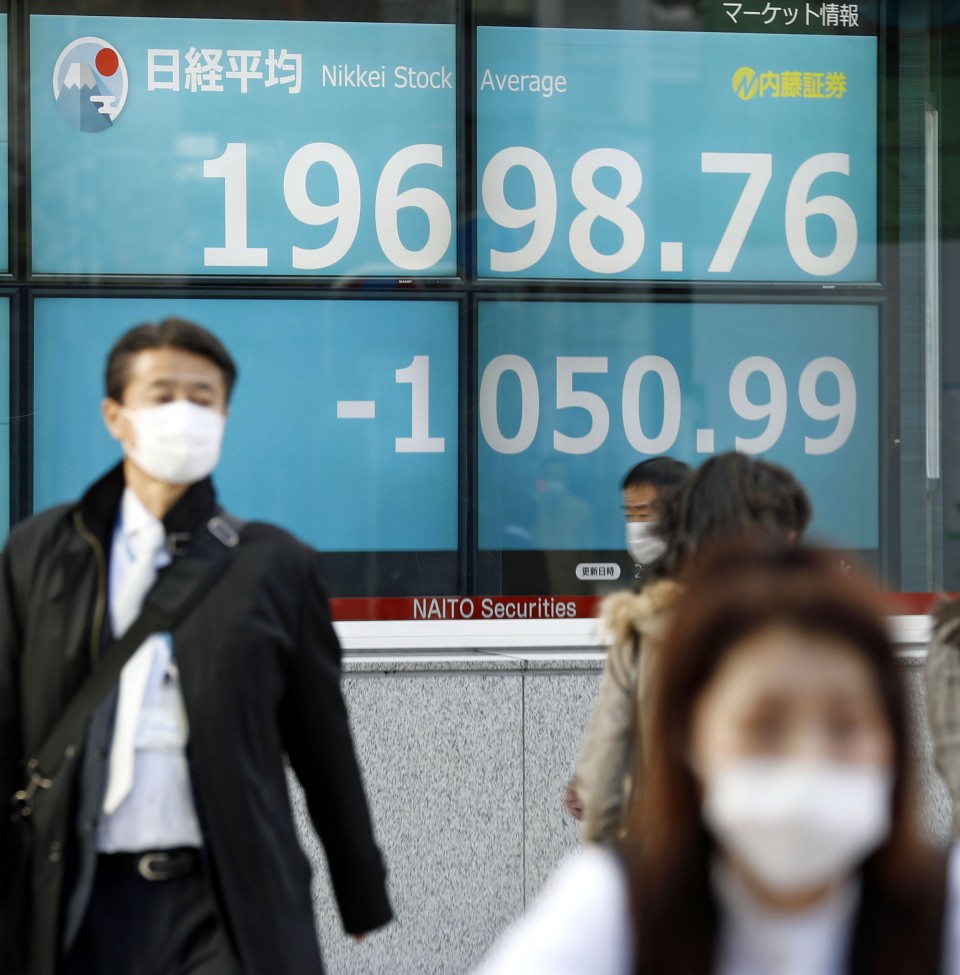 Earlier this month, Kuroda said in an emergency statement that his bank will make every effort to ensure financial market stability. Afterward, the yen fell and Tokyo shares rebounded, but the impact of what investors called his "verbal intervention" was limited.

"The BOJ is in a plight" as it has been urged by other major central banks to take "coordinated action," said Yuichi Kodama, chief economist at Meiji Yasuda Life Insurance Co.

"Even if the BOJ dares to deepen the negative interest rate further, it might be forced to implement measures to ease the side effects of possible excessive declines in long-term interest rates," Kodama said. "BOJ policy could become more complicated."

The Japanese central bank is scheduled to hold a two-day policy meeting from March 18, where the BOJ is expected to expand its lending program for private banks in a bid to prevent smaller firms from facing difficulties in raising funds.

Some economists also say the bank may decide to boost purchases of ETFs to make financial market conditions more accommodative.

Nevertheless, a foreign exchange trader at a Japanese security company said even if the BOJ moves, the yen is unlikely to return to a downward trend for the time being and Tokyo stocks could extend losses amid weak corporate performance.

"A large number of market participants believe that the interest rate gaps between Japan and other nations will narrow down the road. Now is a good time to buy the yen," the trader added.

The new coronavirus first detected late last year in the central Chinese city of Wuhan, which causes the disease now known as COVID-19, has reportedly infected more than 100,000 people and killed over 3,500 worldwide so far.