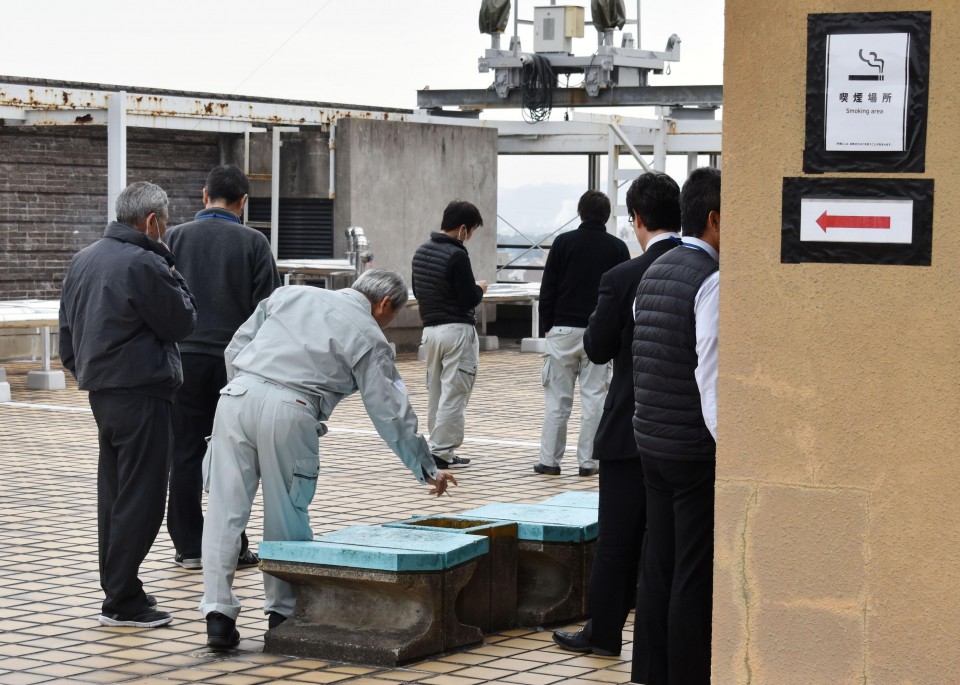 OKAYAMA, Japan - A law, set to take full effect in April that will ban people from smoking indoors in government buildings and other places in Japan, appears to be backfiring as outdoor smoking is making a brash comeback in all the wrong places.

As smokers find it increasingly difficult to find designated indoor smoking areas, they are turning to neighborhood parks to light up and drawing the ire of nearby residents for the unwanted smoking and cigarette butts left scattered about.

Government agencies find themselves between a rock and a hard place as they try to appease the general public from a smoking nuisance while using a loophole to bring back outdoor smoking areas at their own facilities to satisfy the country's smoking culture.

At the end of February, on the ninth-floor roof of the Okayama city hall in Okayama Prefecture, western Japan, more than ten employees gathered around ashtrays for a smoke break in an open space demarcated from nonsmokers only by white lines.

"It really helps out for people like me who can hardly find any places to smoke any more. I appreciate that at least some consideration is given to smokers," said one male government employee who was on the roof having a smoke.

Under the revised Health Promotion Law, which partially took effect last July, government agencies, schools and hospitals started banning people from smoking indoors, and more establishments such as bars and restaurants are to face similar rule changes from April.

In accordance with the law change, Okayama removed ashtrays and banned smoking inside the city hall. But this only resulted in staff heading over to a nearby park to smoke, sparking a slew of complaints from people, particularly parents worried about their children inhaling second-hand smoke.

Smoking-linked losses in Japan estimated at over 2 trillion yen

The city then reluctantly decided to reinstall a smoking area on the building's roof -- taking advantage of a provision to the law that allows smokers to light up outdoors on facility grounds on the condition that an "isolated smoking area" is provided.

"You might say that this flies in the face of the times, but there is a difference between the ideal and the reality of what the law calls for," an Okayama municipal government official said.

Smokers who have limited places to go outdoors are not shy about flouting the law in parks or on streets near stations where smoking areas have all but been eliminated due to the law change.

A 58-year-old woman who stopped by the park with her grandchild near the Okayama city hall said, "I worry about children inhaling passive smoke. There needs to be more emphasis on the trend of people not smoking," she said.

Cigarette butts littering streets are also causing major headaches for officials. Last July, a smoking area was removed on a road near JR Iwakuni Station in Iwakuni, Yamaguchi Prefecture, western Japan, but smokers continue to drop their butts there anyway.

Although the antismoking push demands that consideration be given to people using public outdoor spaces in a smoke-free environment, there has been a 20 percent increase of cigarette butt litter in certain places compared with the same period a year earlier.

Tourism associations and other agencies across the country have demanded that the problem be addressed, even suggesting installing outdoor smoking rooms that do not leak smoke.

Reinstalling smoking facilities "is a countermeasure for butt litter and passive smoke. But this is only a temporary measure as we go forward with the smoking ban," said an Iwakuni official.

But what are supposed to be "temporary measures," in some cases, are turning into long-term policies.

For example, the driver's license center at the Kumamoto Prefectural Police Department in Kyushu got rid of an outdoor smoking area on its premises last July. But the smoking area was reinstalled the very next month due to heaps of butts piling up on the outdoor lawn and people smoking outside the facility grounds.

According to the department, the move was seen as a "one-month temporary measure" but because it "appeared to have the effect of lessening butt litter," some six months later, the outdoor smoking area remains a fixture there today.

Speaking about the appropriateness of such reversals, a health ministry official was noncommittal, simply saying, "To get rid of undesired passive smoke we ask that the appropriate response be made."

Manabu Sakuta, chairman of the Japan Society for Tobacco Control, stressed that "the antismoking push must move forward," adding, "If (the government) is going to continue to install smoking areas, they need to work on a plan where they are opened only during break times, and signs are posted to make people aware of the antismoking campaign."

A 2017 survey by the education ministry showed about 90 percent of kindergartens, elementary as well as junior and senior high schools, banned smoking. A health ministry survey in the same year showed nearly 60 percent of hospitals accommodating 20 or more inpatients also imposed a total smoking ban.

While the law will impact from April 1 eateries and bars, the places where people are most frequently exposed to second-hand smoke, the change has sparked controversy due to the government's approach to other exemptions as well.

Existing eateries and bars with initial capital of up to 50 million yen and a customer seating area of up to 100 square meters will be exempted from the indoor smoking ban and will not be required to have separate smoking areas if they display "smoking allowed" signs at their entrances.

The exception to the rule appears aimed at giving smaller shops, which might suffer from a loss of customers due to the smoking ban, such as individual proprietors with no staff members, some leeway in deciding whether smoking will be permitted on their premises.

Critics, however, claim the exceptions will allow smoking at more than half of the eateries and bars across the country.