The Defense Ministry said Wednesday it now estimates the costs to relocate a key U.S. military base within Okinawa will more than double from the current budget to 930 billion yen ($8.5 billion) and the construction period needs to be extended to over nine years.

The ministry also said it will take 12 years to complete the project of moving U.S. Marine Corps Air Station Futenma from a crowded residential area of Ginowan to the less populated coastal zone of Henoko.

The project schedule, outlined at a ministry panel along with the estimated costs and construction period, means the land used for the U.S. air base will be returned to Japan sometime in the 2030s or later, compared with fiscal 2022 or later set under the agreement between Japan and the United States in 2013.

According to the current plan, the construction for the replacement facility will take five years to be finished, with the project costs totaling 350 billion yen.

But the ministry said it will take nine years and three months to complete the construction, as additional work is necessary to reinforce the weak seafloor in an area where the landfill work is due to be carried out off the coast of Henoko in the city of Nago. 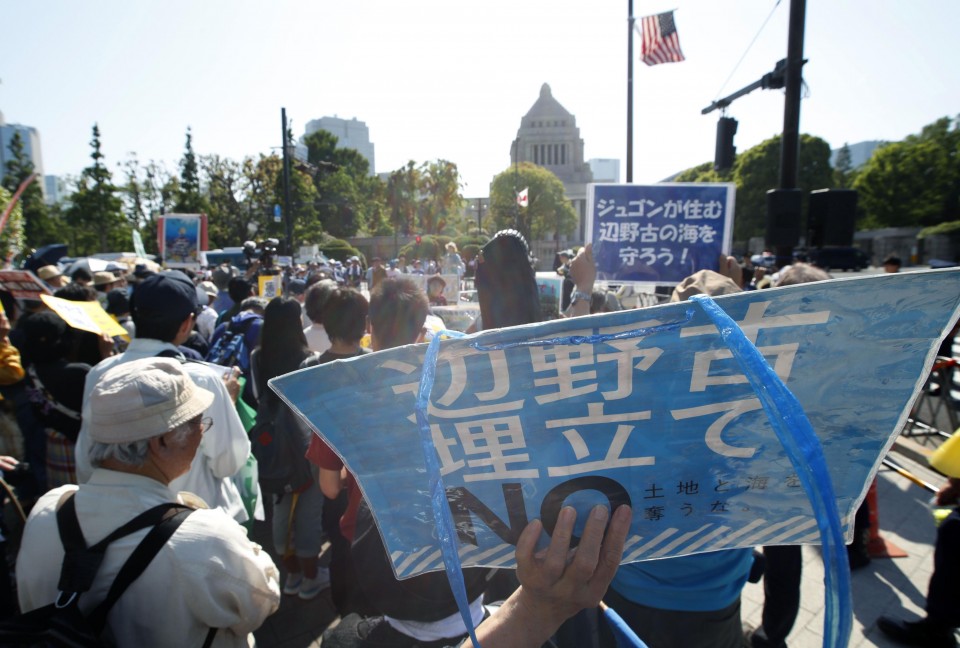 (People stage a rally in front of the parliament building in Tokyo on May 25, 2019, to protest against the planned relocation of the U.S. Marine Corps' Air Station Futenma in Okinawa Prefecture, southern Japan, to the Henoko coastal area in the prefecture's Nago city.)

After the construction is completed, more preparations such as moving and procuring equipment will be necessary before the relocated base starts operations, according to the ministry.

The central government will need to gain approval to carry out the revised construction plan from the Okinawa prefectural government.

"We will aim to move ahead with the (additional) work smoothly," Defense Minister Taro Kono told reporters.

But the outlook for the extra work remains uncertain, as Deputy Okinawa Gov. Kiichiro Jahana told reporters the same day that the construction work should be "immediately suspended" and this is a good opportunity for the central government to re-examine the base relocation plan.

The plan was once delayed in 2015 when Takeshi Onaga, the Okinawa governor at that time, revoked his predecessor's permission for the landfill work. The decision brought the central and Okinawa governments into court disputes.

The project to move the Futenma base originated in an agreement reached between Tokyo and Washington in 1996. But local residents have long hoped for the base to be moved outside of the island prefecture, which is home to about 70 percent of the total area of land exclusively used by U.S. military facilities in Japan.

Still the central government has maintained that the current relocation plan is "the only solution" for removing the dangers posed by the Futenma base without undermining the deterrence provided by the Japan-U.S. security alliance.

Japan and the United States plan to reclaim about 160 hectares, including the sea area where a soft ground has been found, for the replacement facility and built two runways in a V-shaped configuration.

Current Okinawa Gov. Denny Tamaki, a vocal opponent of the base's relocation, decided to hold a prefectural referendum on the transfer plan in February, which showed more than 70 percent of residents opposed it.

Tamaki said in an interview with Kyodo News in March that it was impossible to conduct such seafloor reinforcement work and he has no plan to approve the additional work.

Japan extends construction period for U.S. base in Okinawa to 10 yrs

YouTuber sent to prosecutors for stunt at busy Shibuya crossing