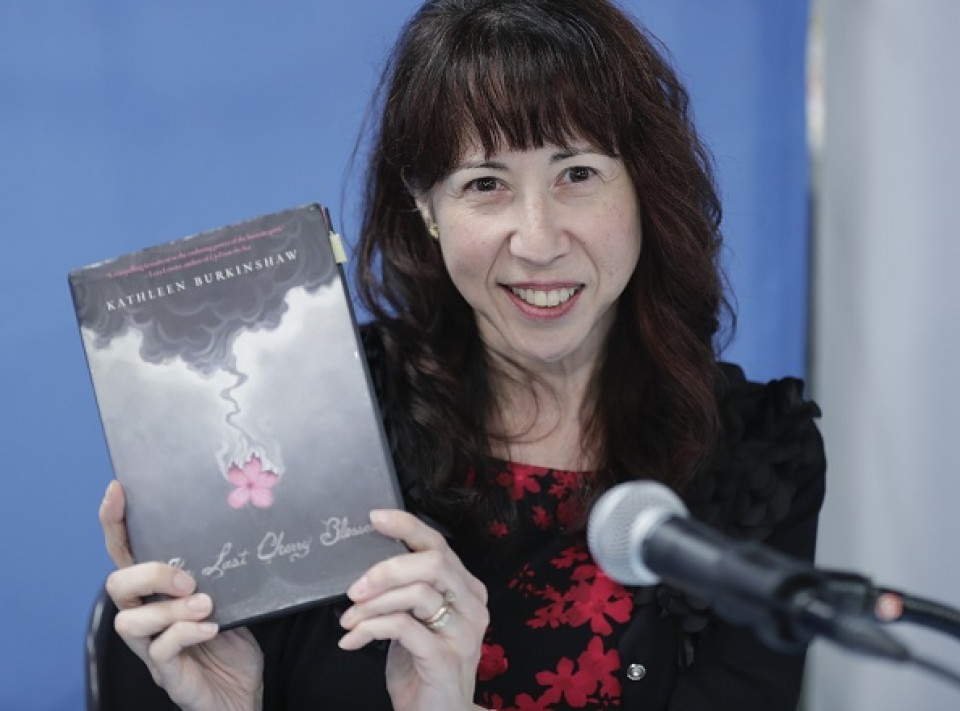 NEW YORK - The late Toshiko Ishikawa Hilliker, a Hiroshima native who immigrated to the United States about 15 years after World War II, started to open up later in life about being a hibakusha, or atomic bombing survivor, who lived through the decimation of her home city on Aug. 6, 1945.

Her daughter, the author Kathleen Burkinshaw, remembers first learning at age 11 about her mother's childhood in the city. At the time, as the 35th anniversary of the nuclear attack approached, Hilliker declined to share details about the traumatic experience with her young daughter.

About two decades later, however, she began to reveal more information in conversations from about 2001 through the end of her life in 2015, with her testimony forming the basis of Burkinshaw's 2016 novel for middle-grade readers, "The Last Cherry Blossom."

"My mom entrusted me with her devastating memories and I took this honor very seriously," the author said at a recent panel discussion at the United Nations headquarters in New York.

Burkinshaw, 50, said she wrote the book to preserve the voices of atomic bombing victims such as her mother, and expressed hope that it would "open young readers' hearts as well as their minds."

The event marked the novel's designation by the U.N. Office of Disarmament Affairs as a resource for educators.

The book's 12-year-old narrator, Yuriko, based closely on Hilliker, chronicles a period in Hiroshima from about six months prior to the nuclear bombing through to its aftermath. Real events and circumstances from Hilliker's life are recounted along with invented dialogue in the work of historical fiction.

"I get very emotional when I read this because I still hear my mother's voice telling me this," Burkinshaw said after reading a passage for the audience of about 50 people, including many educators.

"No matter how old she was when she would talk about (the nuclear bombing), she would cry."

As described in the book, Hilliker survived the Hiroshima blast because she was home sick and did not travel to the city that day to attend school. Her grandfather, however, had been in the city to purchase a train ticket and was killed.

Burkinshaw said her mother, who moved to Rhode Island after marrying an American serviceman in Tokyo in 1959, avoided speaking about the nuclear attacks on Hiroshima and Nagasaki due to the traumatic nature of her memories and lingering anti-Japanese sentiment in the United States.

"She would tell everyone she was from Tokyo," Burkinshaw recalled.

Hilliker began to open up partially as a way to encourage her daughter, who in about 2001 had to leave a career of over 10 years in health care management due to a debilitating neurological condition.

Following the diagnosis of a syndrome, which doctors have told Burkinshaw is possibly linked to her mother's radiation exposure, she moved from Rhode Island to the milder climate of North Carolina while attempting to cope with chronic pain.

As a way to help bolster her in the face of adversity, her mother began to relate in more detail her experiences as an atomic bombing survivor.

Hilliker also felt compelled to share her memories for the sake of her granddaughter. At age 12 in 2010, Burkinshaw's daughter Sara came home upset one day after classmates said the infamous mushroom cloud that had engulfed Hiroshima was "cool."

"The need for human connection and emotion is timeless, and I don't think the kids who were talking about that mushroom cloud were doing anything to be cruel," Burkinshaw said. "They just didn't know. They needed to have that connection."

With Hilliker's permission, Burkinshaw made a guest presentation at the school drawing on her mother's firsthand experience of the atomic bombing. Though her mother was never vocal in the fight for nuclear disarmament, she "couldn't understand why (the use of nuclear weapons) was still even an option," Burkinshaw said.

The grandmother also decided her story could be shared with the children in Sara's grade after considering that she herself had been around their age when the atomic bombing occurred.

Burkinshaw has returned to the school on a near-annual basis to repeat the presentation. On her second visit, a teacher's request for more materials on the subject prompted the idea of a book for young readers.

"The Last Cherry Blossom" was a finalist for Japan's Sakura Medal in 2018 and has earned recognition from a number of U.S. library media associations.

As part of her ongoing campaign to educate children on the issue, Burkinshaw delivers a presentation based on the book at educational conferences and in classrooms nationally and internationally, including via videoconferencing.

"My biggest message, aside from nuclear weapons shouldn't be used again, is to think about the humanity that was under those clouds that day and to understand that it happened to people," Burkinshaw said.

John Ennis, a senior political affairs officer with the U.N. disarmament office, called the novel an "important resource" both for U.S. educators and people all over the world.

"The book's powerful message raises awareness with the younger generation, which is especially pressing now that the hibakusha are getting older," he told Kyodo News.

"The book provides a moving testament why nuclear weapons should never be used again and should be eliminated."

After Hilliker died in January 2015 at the age of 82, Burkinshaw and her daughter made their first visit to Hiroshima in July of that year to have her name etched into the cenotaph for atomic bomb victims at the Hiroshima Peace Memorial Park.

"I was happy that I could bring her back, so to speak, to the place that she loved," Burkinshaw said.

The author has started a second novel set in Hiroshima around the year 1950. She said it will be about her mother's struggle with post-traumatic stress after the nuclear bombing while living in Japan under Allied occupation.

"I am going to do my small part and I am going to keep talking about her story and talking to students about 'The Last Cherry Blossom' so that we will have no more Hiroshimas and Nagasakis," Burkinshaw said.