South Korea opts not to terminate intel-sharing pact with Japan

South Korea reversed its earlier plan to terminate a military intelligence-sharing pact with Japan by midnight Friday amid U.S. pressure to keep the deal alive despite soured ties between Seoul and Tokyo.

If the intelligence pact had expired, it would have dealt a further blow to the bilateral ties. Japanese Prime Minister Shinzo Abe and South Korean President Moon Jae In are now arranging to hold talks late next month in the Chinese city of Chengdu on the sidelines of a trilateral meeting with China, diplomatic sources said.

The two leaders have not held talks since September 2018 when they met on the sidelines of the U.N. General Assembly, though they engaged in a brief chat while in Thailand earlier this month for a regional summit.

The General Security of Military Information Agreement, or GSOMIA, had been set to lapse at midnight after South Korea announced in August its decision not to renew the pact in response to Japan's tightening of export controls.

"Our government has decided to suspend the expiration under the condition that the GSOMIA could be terminated at any moment, to which the Japanese government showed its understanding," said Kim You Geun, deputy director of the Blue House's national security office, at a briefing. 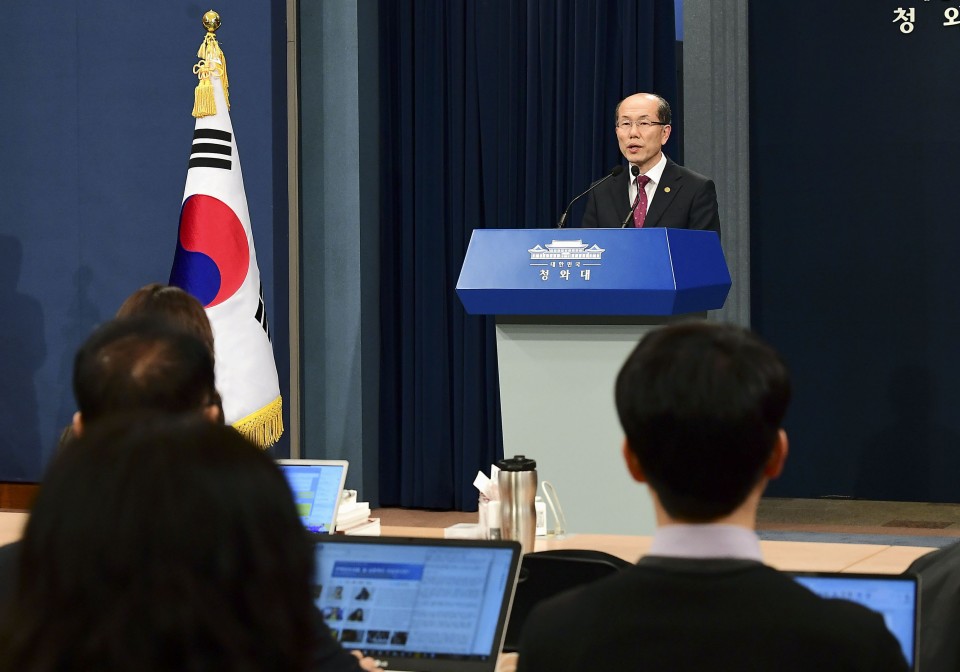 Speaking to reporters in Tokyo, Abe said South Korea had apparently made a "strategic" decision at the last minute.

"It's extremely important for Japan and South Korea, as well as the United States, to cooperate and coordinate to cope with North Korea. I have repeatedly made that clear," Abe said at his office. "South Korea is believed to have made its decision (over GSOMIA) from such a strategic point."

The United States welcomed the South Korean decision. "Given our shared regional and global challenges, decisions to strengthen trilateral cooperation are timely and critical," the State Department said in a statement.

"This decision sends a positive message that like-minded allies can work through bilateral disputes," it added.

Japanese officials earlier said South Korea had misread the regional security environment in seeking to end GSOMIA, underscoring that security and trade issues should not be linked.

The United States had expressed concern over a possible weakening of trilateral security cooperation involving its two allies if GSOMIA were scrapped.

U.S. Secretary of State Mike Pompeo had a phone conversation with his South Korean counterpart Kang Kyung Wha late Thursday, in which they "pledged to maintain close coordination and reaffirmed the importance of (the Seoul-Tokyo relationship)," according to the department.

The U.S. Congress on Thursday joined efforts made by the administration of President Donald Trump to highlight the importance of GSOMIA, passing a resolution saying it is "foundational to Indo-Pacific security and defense, and specifically to countering nuclear and missile threats (from North Korea)." 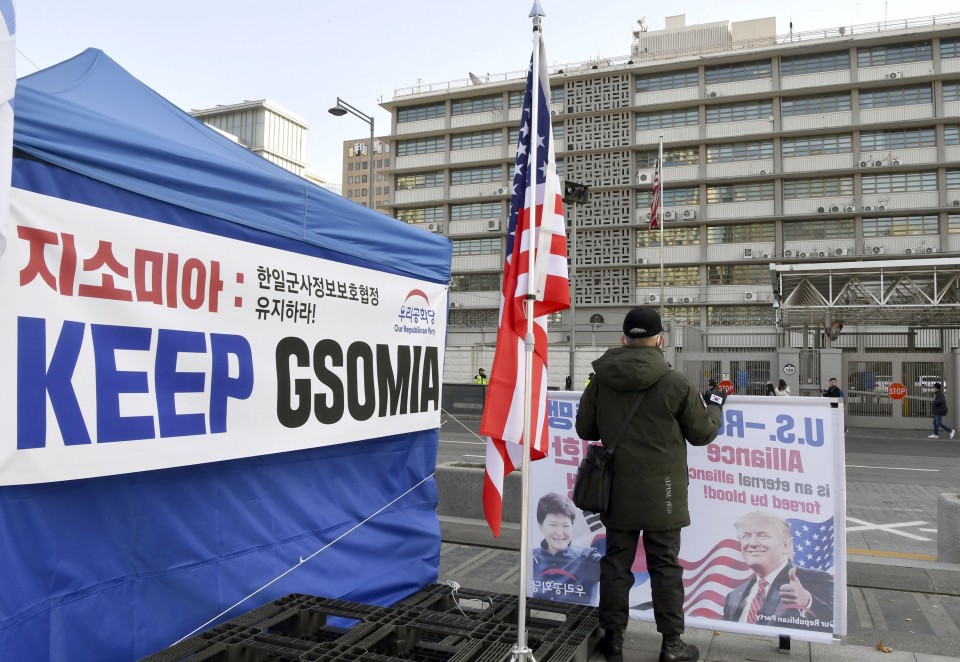 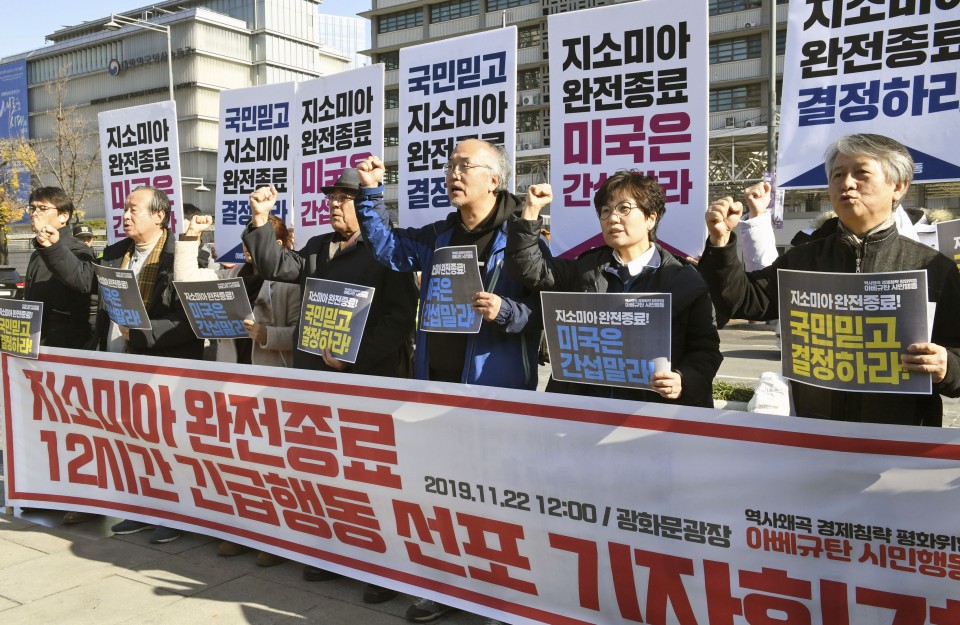 During the briefing in Seoul, Kim said South Korea will suspend its complaint filed against Japan at the World Trade Organization over Tokyo's tightening of controls on some materials needed by South Korean manufacturers of semiconductors and display panels.

At a question and answer session following the briefing, an official from South Korea's presidential office said the suspension of the complaint would remain in force while negotiations between the two countries on export controls are under way.

The official added, however, that the only case for dropping the complaint altogether would be Japan's withdrawal of the export controls.

South Korea filed the complaint in September, viewing Japan's trade steps as defying the spirit of WTO rules, a claim that Tokyo has denied. Failure to find a solution through bilateral consultations would open the way for the establishment of a dispute settlement panel.

For now, Japan will keep the export controls intact and continue to process each application seeking approval for the export of the targeted materials, the Japanese trade ministry said. South Korea will remain off Japan's list of preferred trade partners. 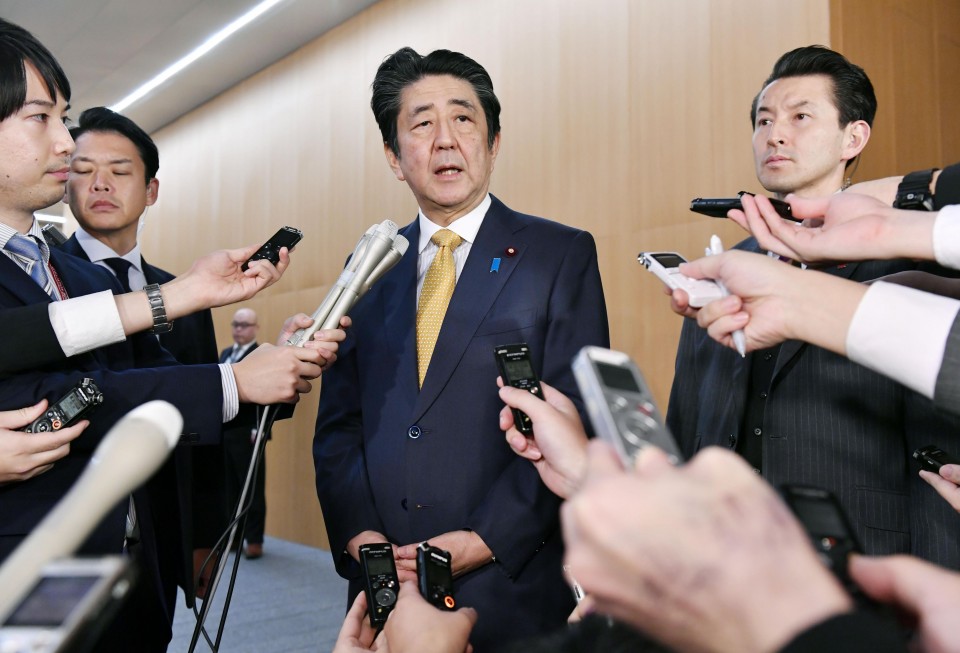 But questions linger over whether the relationship that had hit its lowest point in years will dramatically improve. Japan and South Korea remain at odds over compensation for wartime labor.

Tokyo argues that wartime issues were settled in a 1965 bilateral agreement.

GSOMIA had been automatically renewed annually since it was signed on Nov. 23, 2016, and was due to be extended unless one of the countries decided to abandon it 90 days prior to its extension.

The following is a list of events related to the General Security of Military Information Agreement (GSOMIA), a military intelligence-sharing pact, between Japan and South Korea.

June 29, 2012 -- The governments of Japan and South Korea postpone the signing of GSOMIA due to a last-minute request from Seoul amid concern about a public backlash over the strengthening of military cooperation with its former colonial power.

July 4, 2019 -- Japan tightens control on technology exports to South Korea, targeting three materials used in the manufacturing of semiconductors and display screens for smartphones and TVs.

Aug. 2 -- Japan decides to revoke South Korea's preferential status as a trade partner for the purchase of goods that can be diverted for military use.

Nov. 4 -- Japanese Prime Minister Shinzo Abe and South Korean President Moon Jae In hold a conversation for about 10 minutes on the outskirts of Bangkok ahead of a summit involving leaders of the Association of Southeast Asian Nations plus Japan, China and South Korea.

Nov. 19 -- Moon says in a televised town hall meeting that he will seek to avoid expiration of GSOMIA until the last moment.