Japan head into their Rugby World Cup Pool A game with Samoa this weekend hoping to repeat recent history.

Four years ago, Japan produced some of their best rugby under Eddie Jones to beat the Samoans 26-5, having done so much in the first half that there was never any doubt as to who the winners would be.

On Saturday at City of Toyota Stadium, Jamie Joseph will be looking for an equally disciplined performance from his Brave Blossoms as they look to keep their quarterfinal hopes on track.

But it will not be the walk in the park that some are expecting.

Japan may have won the last two encounters between the sides but overall they have lost 11 of the 15 meetings, and with the Pacific islanders still in the hunt for a place in the knockout stages, the Brave Blossoms know it is going to be a tough, physical day at the office.

"We want to confront them head-on," center Ryoto Nakamura said Friday after his team's captain's run at the match venue.

"It's clear what needs to be done. We have started from scratch (after the 19-12 win over Ireland) and the team is in a good position." 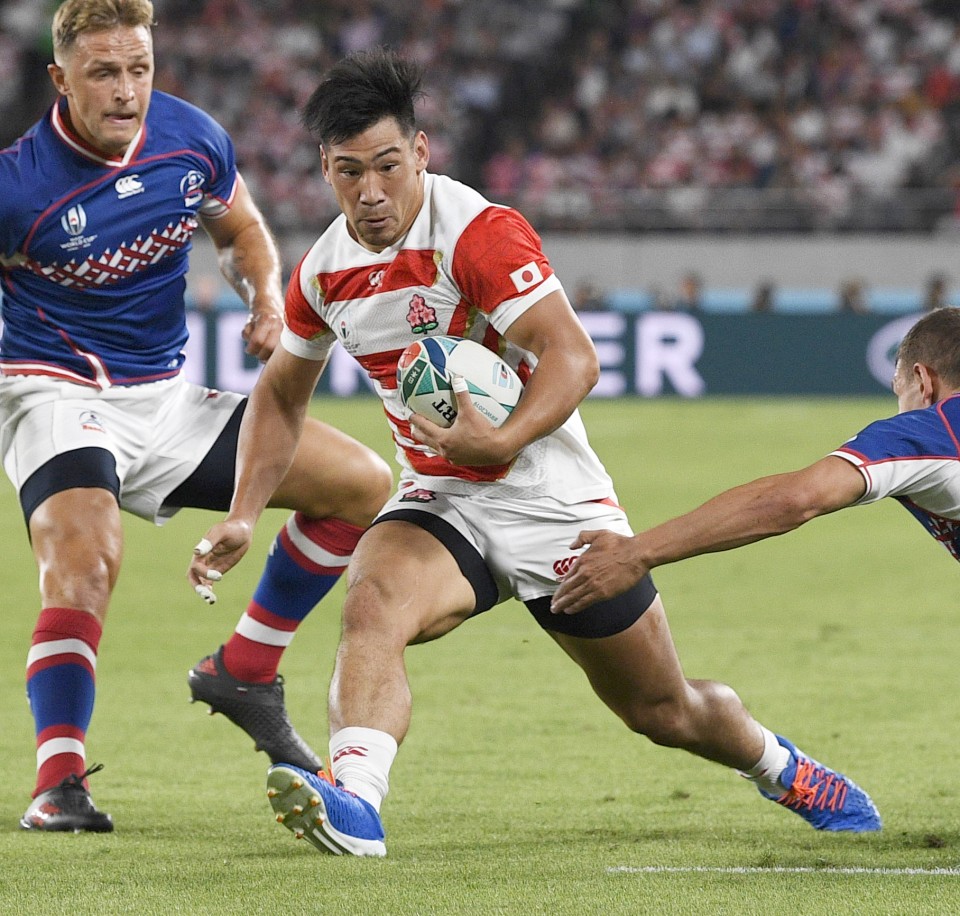 (Ryoto Nakamura of Japan surges forward during the first half of a Rugby World Cup Pool A match against Russia.)

Michael Leitch led the Japan side in 2015 and while he is still squad captain will leave the onfield decisions at Toyota to fellow flanker Pieter Labuschagne.

"Being mentally prepared will be very important," Leitch said. "Samoa lost their last game and will be playing with pride against Japan so we need to counter that with even better mentality. We need to steel ourselves or else we'll be under some pressure from Samoa."

As good as Japan's performance was four years ago at Milton Keynes, England, however, it still drew complaints from some quarters with some questioning Japan's failure to get a bonus point.

The Brave Blossoms eventually became the first side to win three pool games yet fail to reach the last eight, and with Pool A looking like it will go down to the wire, the issue of whether Japan need to chance their arm and go for broke in getting four tries has been a reoccurring theme.

"If we perform well then things like that will happen," said Joseph. "If we do not perform well then it will be a tough test match. (Anyway) I'm not sure the last time Japan went into a World Cup match thinking of a bonus point."

Discipline, not just in terms of not breaking the laws, but also in adhering to the game plan in the face of a big physical opposition, will be key to Japan. 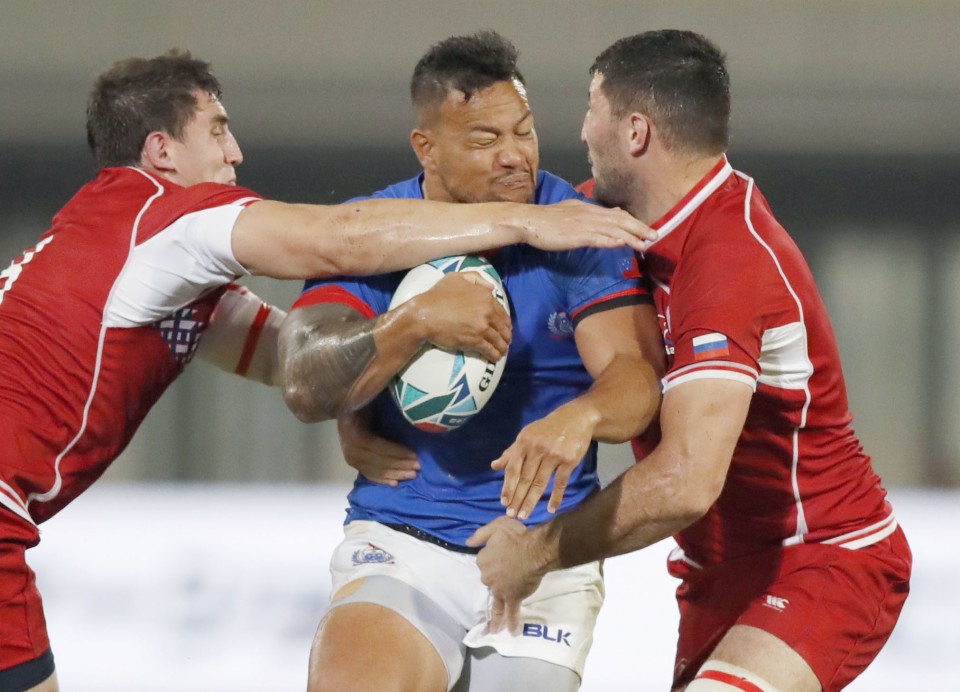 The Japan defense was superb against Ireland and they will need to be at their best again to stop Alapati Leiua and Henry Taefu making inroads in the midfield and creating space for wing Ed Fidow, who plays despite picking up a red card against Scotland.

Last week saw the crowd in Shizuoka reach fever-pitch as Japan withstood wave upon wave of attacks from the men in green.

It is something the Samoans are well aware of.

Flanker Chris Vui said many of his teammates will have never played at a stadium as large as Toyota. But he said the team were still highly motivated despite their big loss to Scotland on Monday.

"After the Scotland game we still had the same belief in what we can do. Now Japan are in our way but they are just another team we need to get past if we are to make the playoffs." 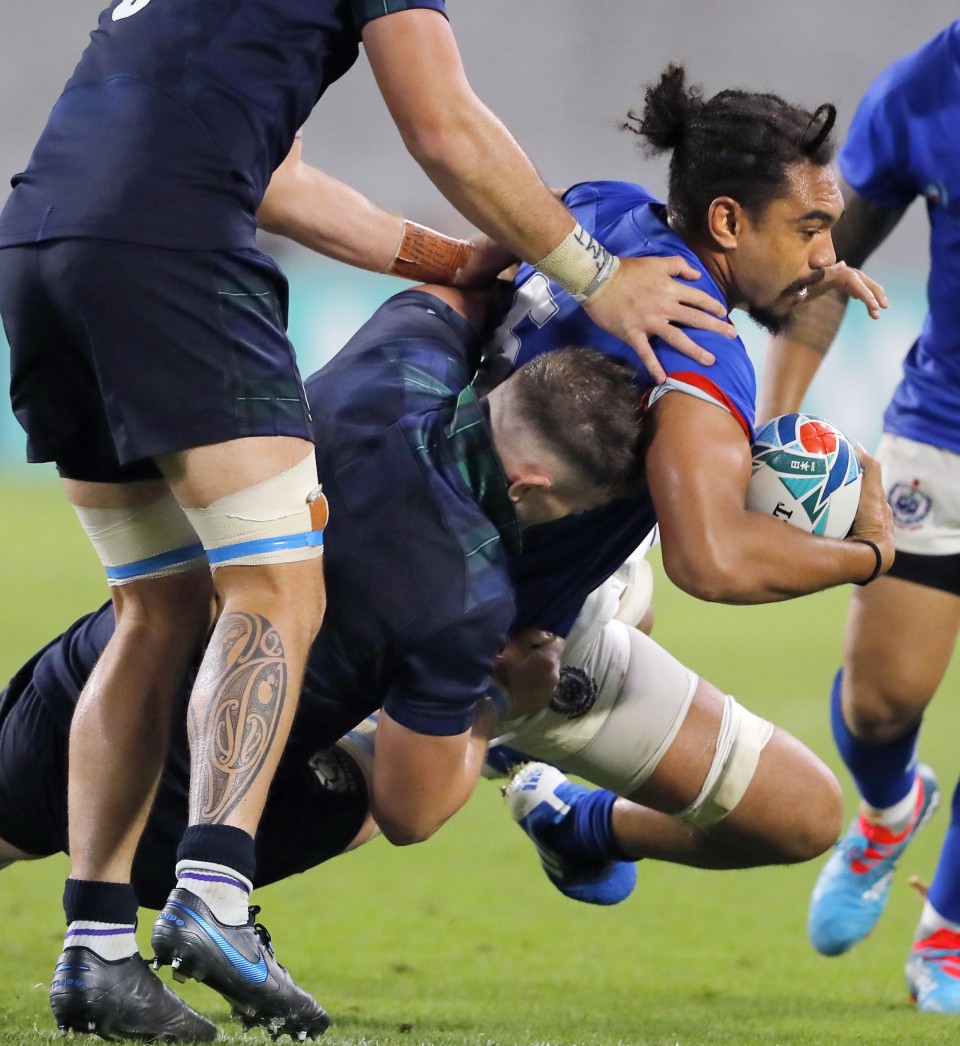 (Chris Vui of Samoa is tackled by a Scotland player.)

It was a view echoed by Paul Alo-Emile.

"We know what's going to come and that it will be a big, loud crowd for Japan and that's something we cannot control," said the reserve prop. "But we can control our actions on the field and we are a tight group focused on ourselves."

With so much at stake, keeping focused will be essential to Japan as they try to ignore the scale of the occasion.

And they certainly seem to have done that in the week.

"I am not concerned who is starting for them, that's their business," said Nakamura when asked about Samoa's decision to bench his former Suntory Sungoliath teammate Tusi Pisi.

"We are focused on what we have to do."