Prime Minister Shinzo Abe reshuffled his Cabinet on Wednesday in an effort to give a fresh image to his near-seven-year-old government and achieve his long-cherished goal of amending Japan's Constitution.

Vowing to ensure "stability" and take on "challenges," Abe retained key allies and heavyweights and brought in 13 new ministers including Environment Minister Shinjiro Koizumi, a young and popular lawmaker widely regarded as a potential future leader.

The appointment of the 38-year-old Koizumi in his ministerial post is seen as an attempt by Abe to boost public support for his Cabinet. But critics said that despite the premier's call for promoting women's empowerment, the number of female Cabinet members increased just by one to two.

In a show of stability in the Cabinet and the leadership of his ruling Liberal Democratic Party, Abe retained old, core members such as Finance Minister Taro Aso, 78, Chief Cabinet Secretary Yoshihide Suga, 70, and LDP Secretary General Toshihiro Nikai, 80.

Abe needs the help of such heavyweights to tackle major issues such as constitutional reforms and possible downside risks to the economy following the Oct. 1 increase in the consumption tax, according to analysts. 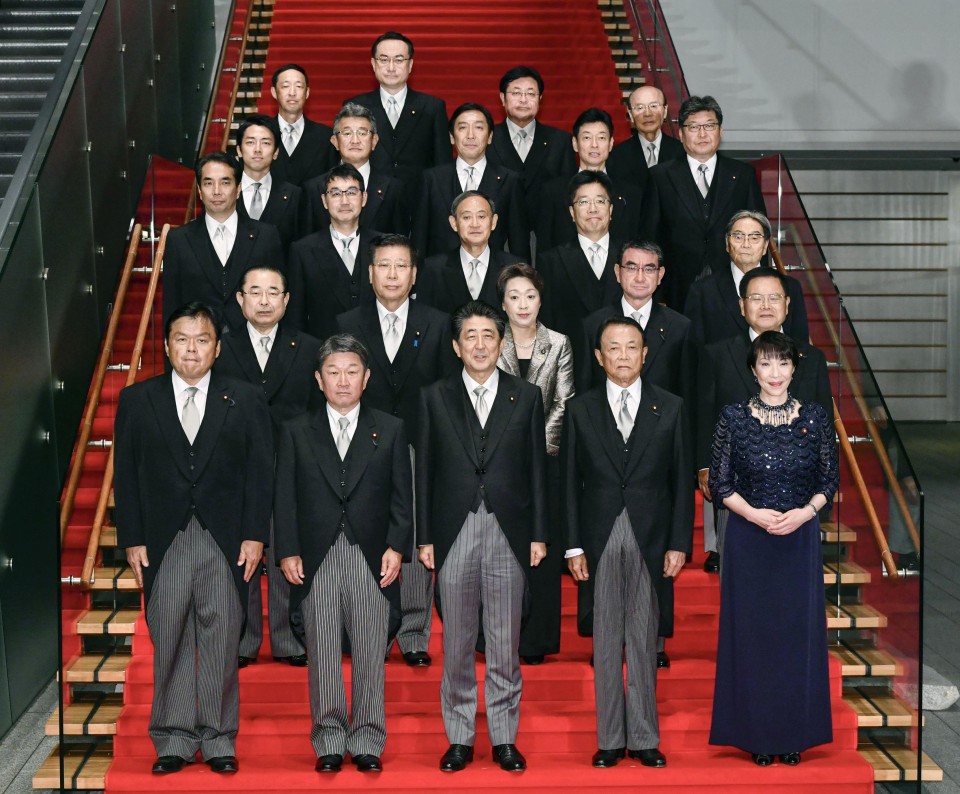 Speaking at a news conference after the Cabinet reshuffle and the shake-up of LDP executives, Abe pledged to achieve "without fail" the first-ever amendment to the Constitution drafted under the U.S.-led occupation, which he described as the LDP's longtime desire.

"Under the new leadership launched today, the LDP will powerfully promote debates on the constitutional revision," he said.

The latest personnel overhaul followed a victory in the upper house election in July for the LDP and its junior coalition partner Komeito party.

In the Cabinet revamp, the 64-year-old leader appointed Foreign Minister Taro Kono as defense minister, while replacing him with Toshimitsu Motegi, economic revitalization minister who has recently clinched in principle a bilateral trade agreement with the United States.

Kono and Motegi will play major roles at a time when there is no end in sight to the sharp deterioration of ties between Japan and South Korea over wartime history and trade policy.

Among the new faces, Abe tapped his confidants, installing Koichi Hagiuda, executive acting secretary general of the LDP, as education minister and Katsuyuki Kawai, special adviser to the prime minister for foreign affairs, as justice minister.

In the LDP, Abe, who doubles as president of the party, Abe retained Fumio Kishida as chairman of the Policy Research Council, while picking Olympics minister Shunichi Suzuki as chairman of the General Council and former education minister Hakubun Shimomura as head of the Election Strategy Committee. 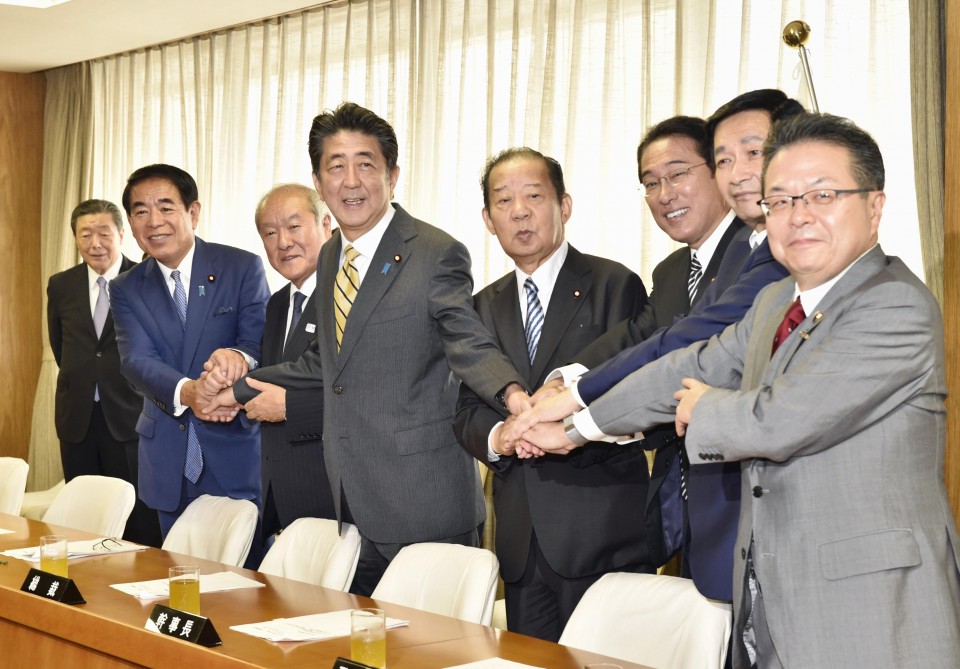 In the Cabinet, the newly appointed ministers included three veteran male lawmakers aged 70 or older and two female lawmakers -- Sanae Takaichi, minister of internal affairs and communications, and Seiko Hashimoto, minister in charge of the Tokyo Olympic and Paralympic Games.

Including only two women in the 20-member Cabinet is far from the Abe government's goal of raising the proportion of women in leadership positions in society such as lawmakers, corporate managers and professors to 30 percent by 2020.

In the press conference, Abe said he expects Koizumi -- a son of former Prime Minister Junichiro Koizumi -- to tackle global environmental issues, including maritime plastic waste and climate change, "from a fresh perspective as a junior" minister.

The younger Koizumi told reporters he will visit Fukushima Prefecture, northeastern Japan, on Thursday to show the government's readiness to provide continued support to areas hit hard by the 2011 massive earthquake and tsunami as well as contamination from radioactive materials following the Fukushima Daiichi nuclear plant accident.

With Abe likely to become Japan's longest-serving prime minister in November, his term as LDP president and thus prime minister will end in 2021. But Nikai said he would back Abe if he wanted to stay on beyond his current term. 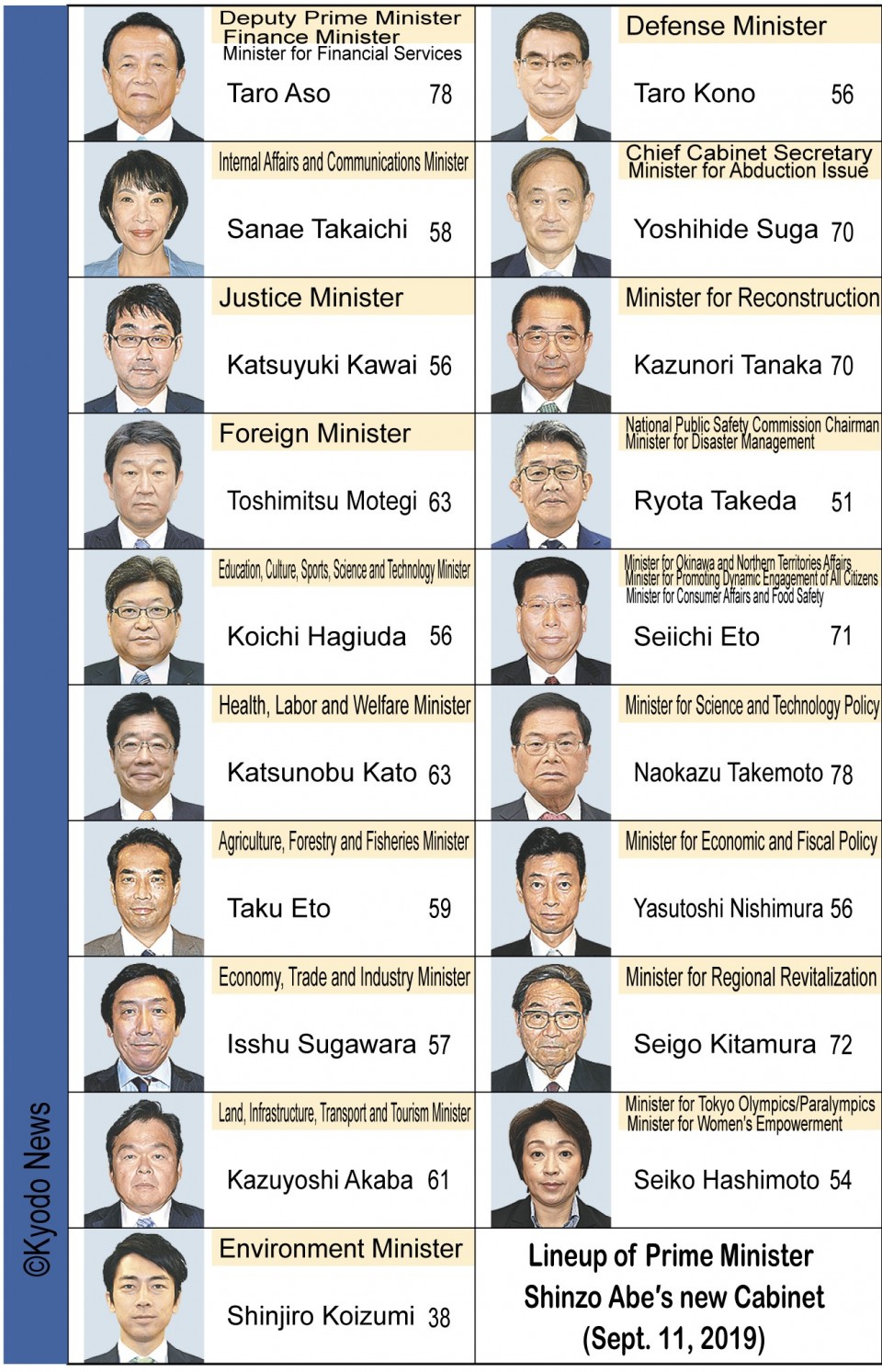