With the Tokyo Olympics and Paralympics less than a year away, Tokyo police are ratcheting up efforts to strengthen foreign language assistance.

Aiming to improve police officers' ability to provide directions, handling lost property claims and other needs in foreign languages, the Metropolitan Police Department has been giving them English conversation lessons. It has also been teaching them how to use a 29-language translation application, which officers stationed at "koban" police boxes can utilize on their mobile devices.

These recently introduced efforts are complementary steps to ease the burden on the department's interpretation center, which handles cases that require foreign language communication.

Ayako Fujioka, 36, has volunteered to give the lessons to fellow officers, holding several sessions every month since April and focusing on things like giving directions and offering other assistance in English.

A few dozen officers, mainly working at local police boxes, take part in each lesson. Among them, Yumeno Asaka, 23, said she has attended every one of the lessons.

"The English words I learned here helped me out when I was asked for directions to a tourism facility," Asaka said.

By improving its officers' language skills, the Metropolitan Police Department hopes more of its officers can directly provide assistance in foreign languages without relying on the headquarters' interpretation center. 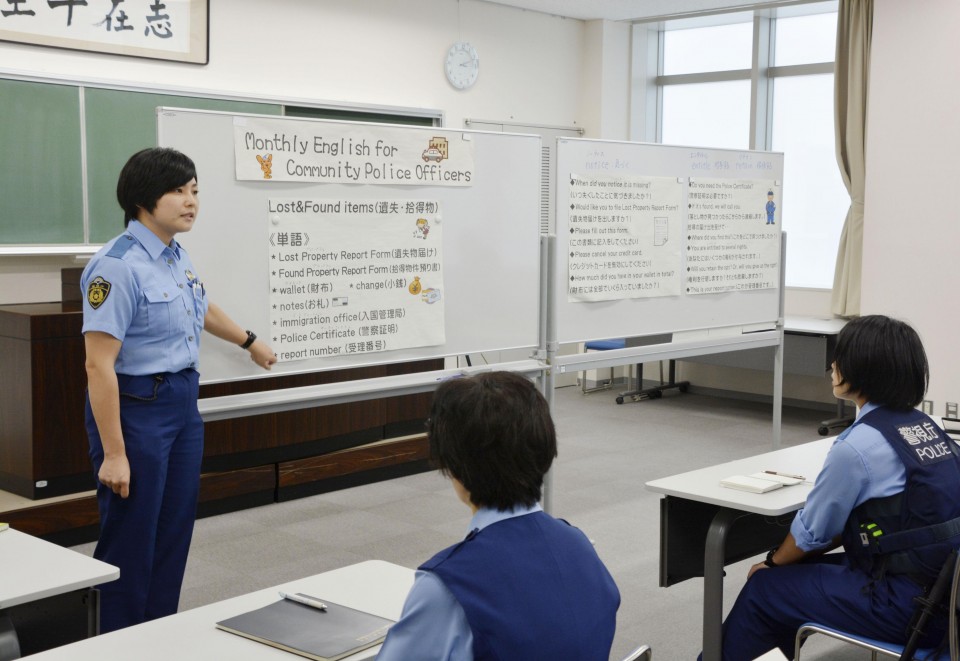 Some 45,000 cases requiring response and assistance in foreign languages went through the interpretation center in 2018, a 50-percent increase from 2014, according to the department.

Starting in June, the translation app capable of audio translation in nine languages including Chinese, Thai, and Vietnamese was provided on a total of 5,000 mobile phones and distributed to officers who regularly patrol local communities.

The app can display a written translation in an additional 20 languages.

The department plans to strengthen the translation center's operations during the Tokyo Olympics, which starts in July next year, by rearranging the shifts of officers stationed there.

"We are doing what we can so that visitors can enjoy their stay without stress," said one senior official of the department.

For officers with foreign language skills but not working at the translation center, the department has been providing intensive language lessons, with each course lasting one month, since 2015 to help them maintain their skills.

Since Tokyo was selected as the 2020 Olympic venue in 2013, the government and private companies such as public transport operators have been preparing for a sharp increase in foreign visitors, putting up more multiple-language signs, boosting capabilities to provide emergency information to non-Japanese speakers and developing smartphone apps for foreign visitors.