Tens of thousands of people took to the streets of Taipei and four other major Taiwanese cities on Sunday as part of a global "anti-totalitarianism rally" in support of Hong Kong protesters who have been demanding greater democracy for the last four months.

Similar rallies were held in over 40 other cities around the world including Berlin, Sydney and Tokyo.

In the capital Taipei, organizers said more than 100,000 showed up at a march that began outside the legislative compound and also ended there.

Braving heavy rain, participants chanted "Free Hong Kong" and "Taiwan with Hong Kong," with many holding placards critical of Beijing's proposal to use the "one country, two systems" formula for Taiwan.

Senior members of Taiwan's ruling Democratic Progressive Party, which has long been identified with Taiwan independence, took part in the march.

Since June, there have been protests almost every weekend in Hong Kong, many turning violent, initially triggered by a now-suspended extradition bill that would have allowed Hong Kong people to be sent to mainland China for trial.

The protesters have now made a list of five demands, which include and independent inquiry into alleged police brutality and democratic reform. 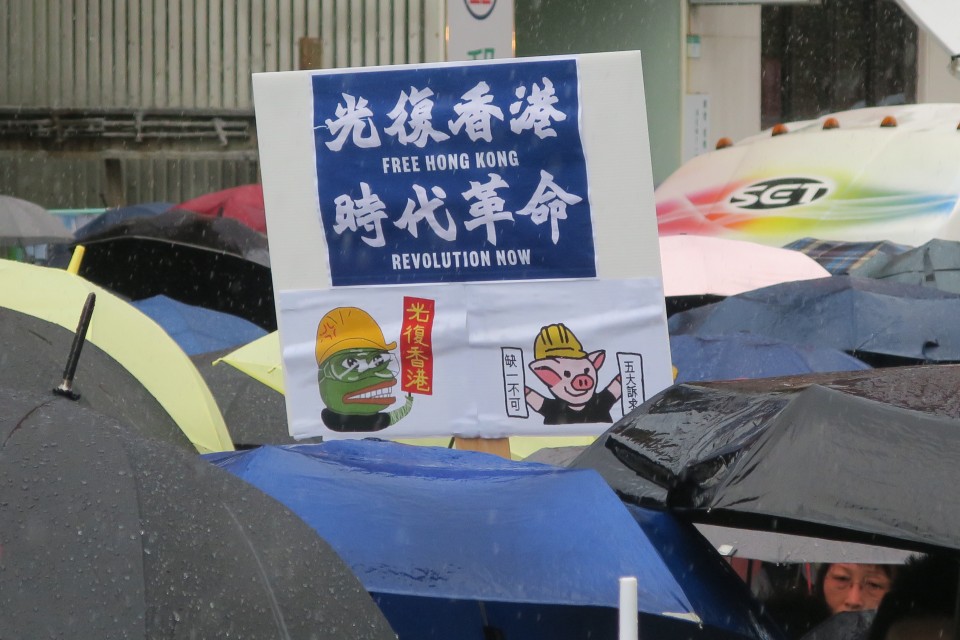 The organizers of Sunday's march said that Taiwan and Hong Kong should object to "one China" and peace agreements with China. "One China" refers to Beijing's view that Taiwan is not a separate and independent country from mainland China.

They also called on Taiwan's government to establish a legal framework to shelter Hong Kong people who flee political persecution.

Before the march began, Hong Kong singer-activist Denise Ho was attacked by a Chinese man who poured a can of red paint over her head while she was talking to reporters.

Undaunted, Ho continued the interview and said she will not be intimidated by what she called "red terror."

"What such dramatic behavior tells us is that China wants us to shut up," Ho said. "But we will never back down because there is nowhere to go."

President Tsai Ing-wen criticized the perpetrators on her Facebook page, saying that her government will not tolerate such "violent disruption" and that no one should ever attempt to challenge Taiwan's democracy and rule of law. 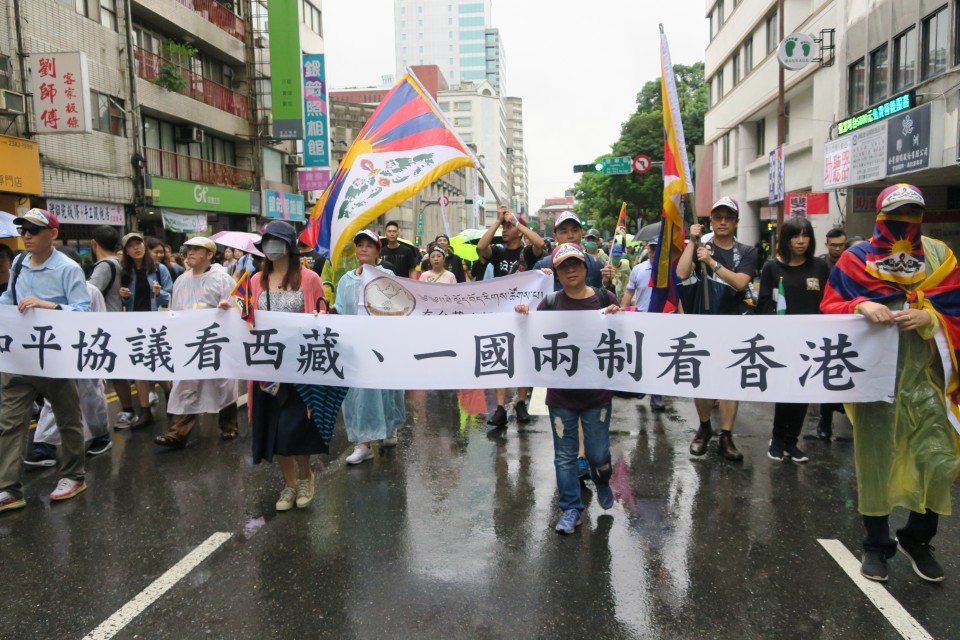 Despite disagreeable weather, the march in Taipei attracted people from all walks of life and of different nationalities.

Also taking part in the march was Paul Lin, cofounder of the Taiwan Youth Anti-Communist Corps and a political commentator.

Lin said what Taiwan can learn from Hong Kong is that the Communist Party of China is not at all trustworthy because it has no problem negating its commitment to Hong Kong.

Another participant, Daniel Lin, said he attended the march because he wanted Hong Kong people to know that Taiwanese people care about them.

The 37-year-old businessman who came to the event with his dog said he hopes all Hong Kong people will be able to enjoy the same level of individual freedom, security and human rights they had before the city was handed over to China in 1997.

Taiwan and mainland China have been governed separately since they split amid a civil war in 1949. Beijing has since then endeavored to diplomatically isolate Taiwan, which it regards as a renegade province awaiting reunification.