Hong Kong police fired tear gas in a bid to disperse protesters gathering in the shopping district of Causeway Bay on Sunday for a march against authoritarianism.

After firing rounds of tear gas and issuing warnings of the use other non-lethal weapons, the police retreated. The crowd subsequently regrouped and marched on toward the government headquarters at Admiralty on Hong Kong Island.

With many holding umbrellas aloft, the mainly black-clad protesters chanted: "Five demands, not one less" and "Freedom for Hong Kong."

The unauthorized march was held to mark Global Anti-Totalitarianism Day, with similar protests behind staged in over 40 other cities around the world in a joint effort to protest against China's ruling Communist Party. The movement threatens to distract attention away from China's 70th anniversary celebrations on Tuesday. 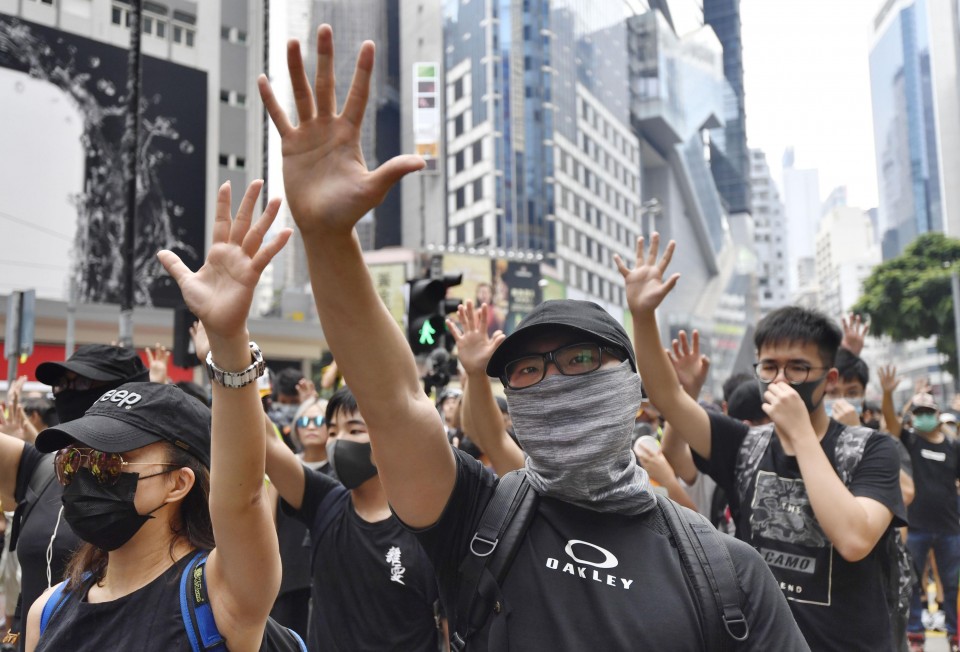 Many shops including the Sogo department store in Causeway Bay closed ahead of Sunday's protest.

As the crowd reached the government headquarters, a group of protesters set up roadblocks nearby and faced off with police.

Some hard-core demonstrators threw petrol bombs and bricks at police while setting the makeshift roadblocks on fire as they were chased off. In return, police fired teargas, beanbag rounds, pepper spray and water cannon to clear the protesters.

By the early evening, at least 13 people were reported injured, according to hospital figures, including one journalist who sustained eye injuries while covering the protest on a footbridge in the Wan Chai district.

It is the 17th consecutive weekend Hong Kong has seen rallies or clashes, triggered by a now-suspended extradition bill that would have allowed Hong Kong people to be sent to mainland China for trial.

Hong Kong leader Carrie Lam's decision to withdraw the controversial bill when the legislature session resumes next month has failed to satisfy protesters, whose demands have grown to include an independent inquiry into alleged police violence against protesters and democratic reform.