Rank-and-filer Okinoumi earned his eighth-straight win at the Autumn Grand Sumo Tournament on Sunday to remain undefeated and in sole control at the midpoint of the 15-day meet.

The No. 8 maegashira is the first top-division man to secure a winning record at Tokyo's Ryogoku Kokugikan, while No. 10 Meisei also recorded a victory on Day 8 to become the only wrestler one win back after sekiwake Mitakeumi suffered his second loss.

Yokozuna Kakuryu, who suffered his third-straight loss to a rank-and-filer on Saturday, pulled out of the 15-day meet with a left knee injury prior to the day's bouts and forfeited his scheduled match against No. 4 Tamawashi (5-3).

Kakuryu's withdrawal follows fellow yokozuna Hakuho's on Day 2 and gives the lower-ranked fighters an opportunity to snag a title in the grand champions' absence.

In the first half of makuuchi action at Tokyo's Ryogoku Kokugikan, Okinoumi repelled an initial attack from No. 11 Onosho (3-5) and maneuvered his opponent around the ring before slamming him off the dohyo with a powerful body charge. 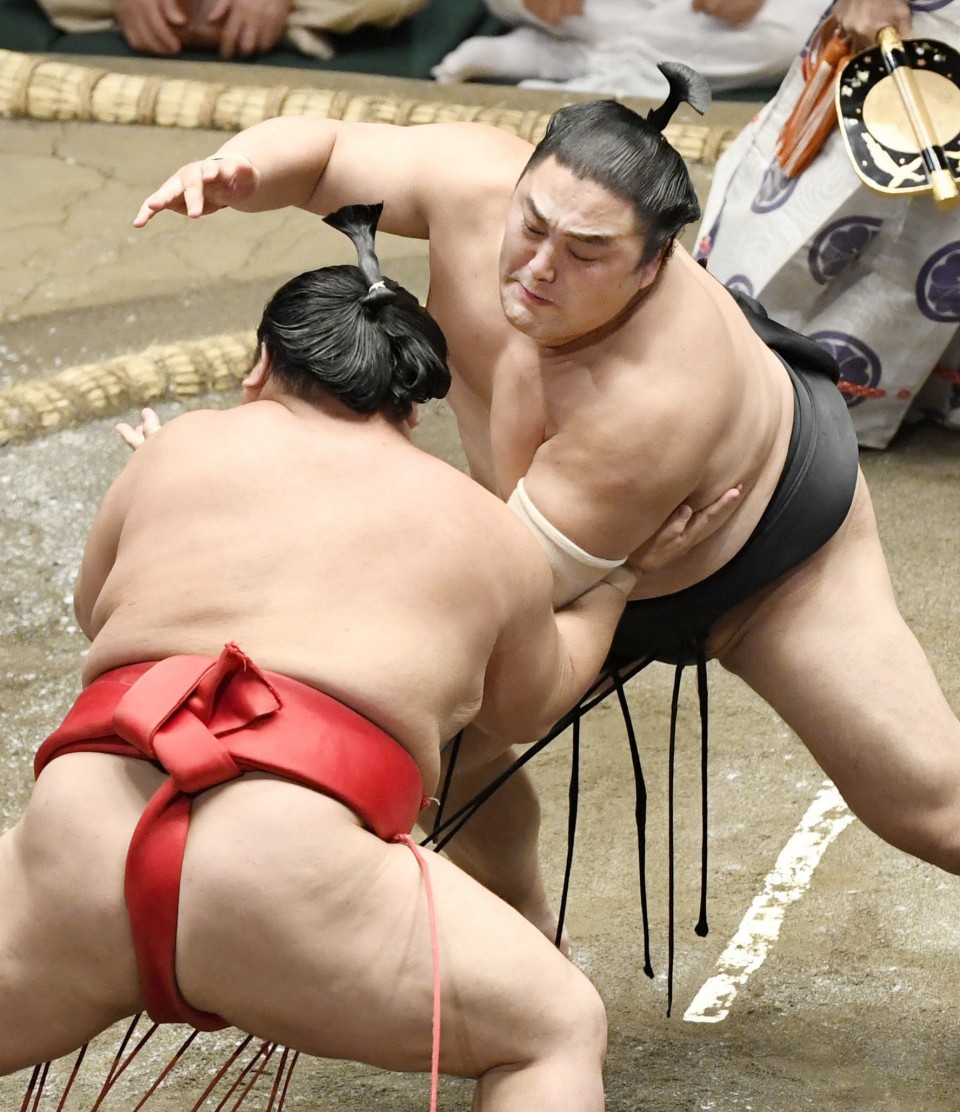 The 34-year-old veteran from Hakkaku stable is a former sekiwake and three-time runner-up who is already three wins away from matching his best top-tier record of 11-4. He next faces No. 5 Ryuden (3-5) whom he has beaten four times in six matchups.

In later bouts, Meisei quickly pushed out No. 7 Kotoeko (3-5) to stay in the running for the Emperor's Cup, while Takakeisho (6-2) prevailed in an all-sekiwake clash with Mitakeumi.

Takakeisho delivered a hard hit on the initial crash with his colleague, then followed up with several more to drive out the defenseless Mitakeumi, who had won six straight matches. Takakeisho needs 10 wins here to regain his ozeki status for November's Kyushu tourney.

The two demotion-threatened ozeki here had mixed fates on Day 8, with Goeido falling to 5-3 and Tochinoshin improving to 3-5.

Goeido was slapped aside trying to force out No. 3 Tomokaze (5-3), who picked up a kimboshi for defeating Kakuryu on Day 7, while Tochinoshin threw out No. 4 Shodai (2-6). Both ozeki require eight wins to keep their position at sumo's second highest rank in November.

Endo improved to 6-2 with a win over No. 5 Chiyotairyu (2-6). The komusubi was taken back to the edge but recovered and lunged back as Chiyotairyu slipped to the sand.

Hokutofuji (2-6) ended a six-bout losing streak with a win over komusubi Abi. The top-ranked maegashira, who had been winless since defeating Hakuho on opening day, dug in with a solid underarm grip and muscled Abi (5-3) over the straw.

No. 2 Asanoyama, top-division debutant No. 14 Tsurugisho, and No. 15 Ishiura comprise the rest of the six wrestlers sitting two wins off the pace at 6-2.