Hiroshima marked the 74th anniversary of its atomic bombing by the United States on Tuesday, with the city's Mayor Kazumi Matsui putting pressure on the Japanese government to join a U.N. treaty banning nuclear weapons in his peace declaration speech.

But Prime Minister Shinzo Abe declined to accept the request, saying the treaty does not reflect the reality of security. Japan has refused to participate in the treaty, along with other countries under the U.S. nuclear umbrella, as have the world's nuclear-weapon states.

"I call on the government of the only country to experience a nuclear weapon in war to accede to the hibakusha's (atomic bomb survivors') request that the TPNW be signed and ratified," Matsui said in the annual declaration at the memorial ceremony, referring to the Treaty on the Prohibition of Nuclear Weapons, which was passed in July 2017 with the support of 122 nations.

"I urge Japan's leaders to manifest the pacifism of the Japanese Constitution by displaying leadership in taking the next step toward a world free from nuclear weapons."

For the past two years, Matsui had stopped short of explicitly demanding that Japan join the treaty, citing his wish to not make political capital from the peace declaration. The treaty is not yet in force since it has not been ratified by the required 50 states.

Holding a press conference after attending the ceremony, Abe said the treaty is "not based on the real aspects of security." 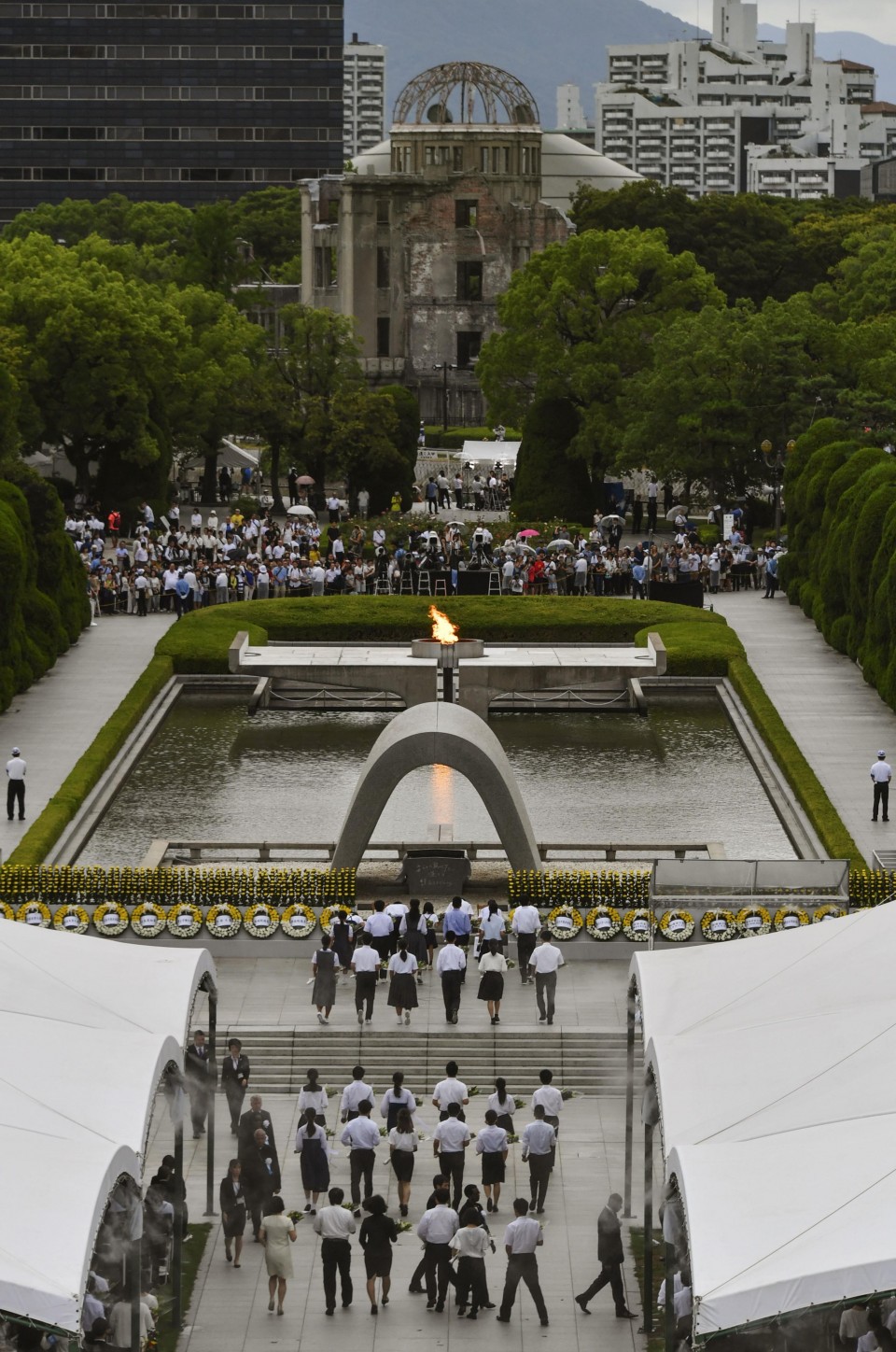 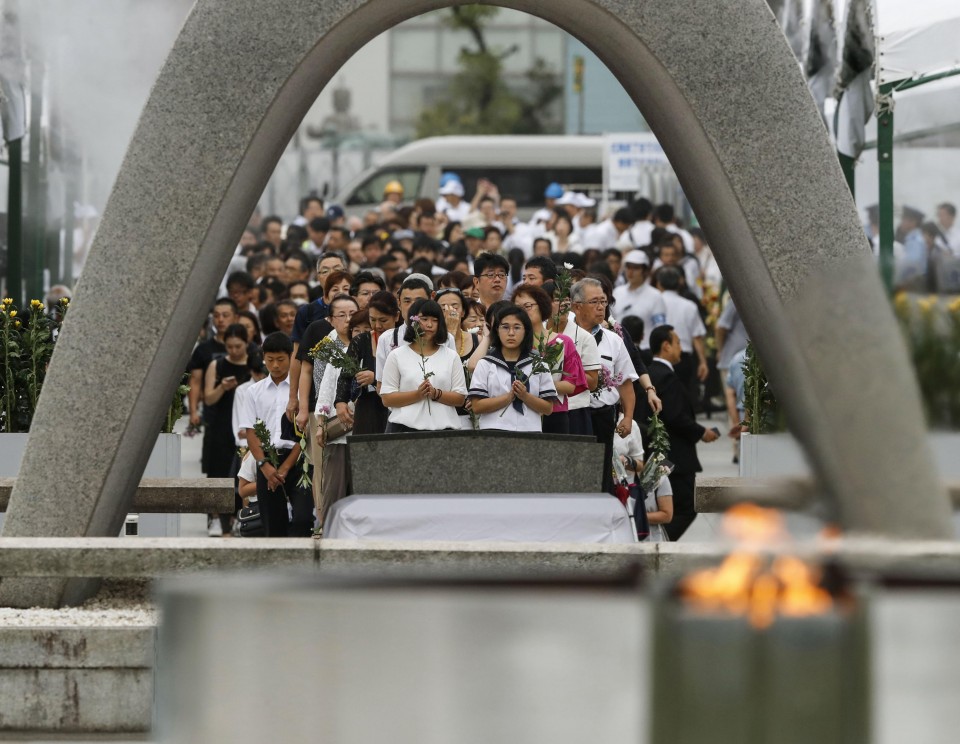 In a speech delivered at the ceremony, he did not mention the treaty, only saying Japan will serve tenaciously as a "mediator between nuclear-weapon states and non-nuclear weapon states" and "take the lead in making such efforts" in the international community.

This year's anniversary came after the United States on Friday formally withdrew from the Intermediate-Range Nuclear Forces Treaty, a major nuclear arms control pact with Russia signed in 1987, raising fears of a new arms race.

The move, combined with other pressing issues such as Iran's nuclear activity and the denuclearization of North Korea, could add to global uncertainty before governments review the Nuclear Non-Proliferation Treaty, the keystone of the international nuclear disarmament regime, next spring.

Attended by some 50,000 people and representatives from about 90 countries including the United States, Russia and Britain, the annual ceremony took place at the Peace Memorial Park near Ground Zero.

"Around the world today," Matsui said, "we see self-centered nationalism in ascendance, tensions heightened by international exclusivity and rivalry, with nuclear disarmament at a standstill."

The power of individuals is weak, he said, but added there have been many examples of collective strength achieving desired goals. 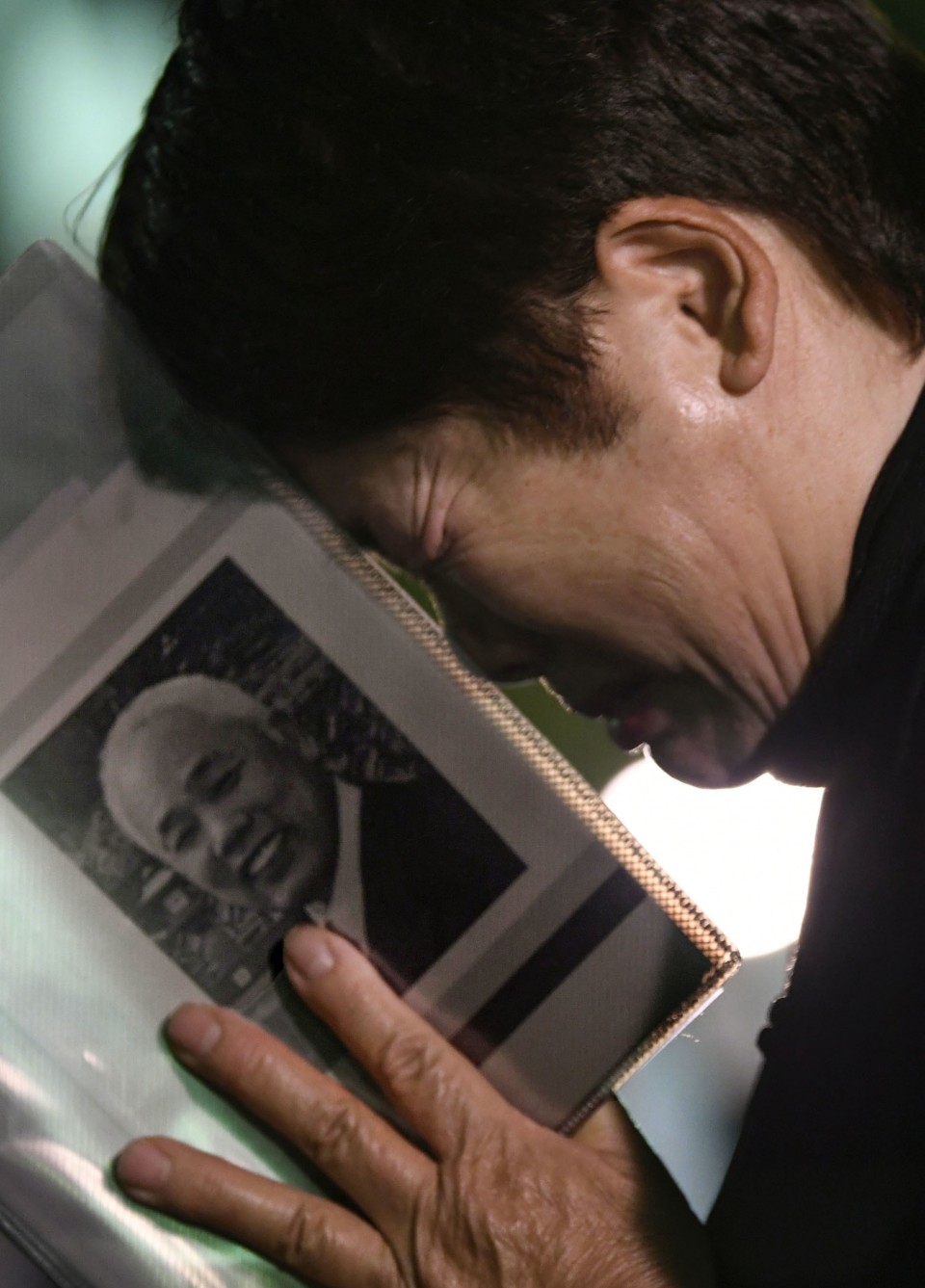 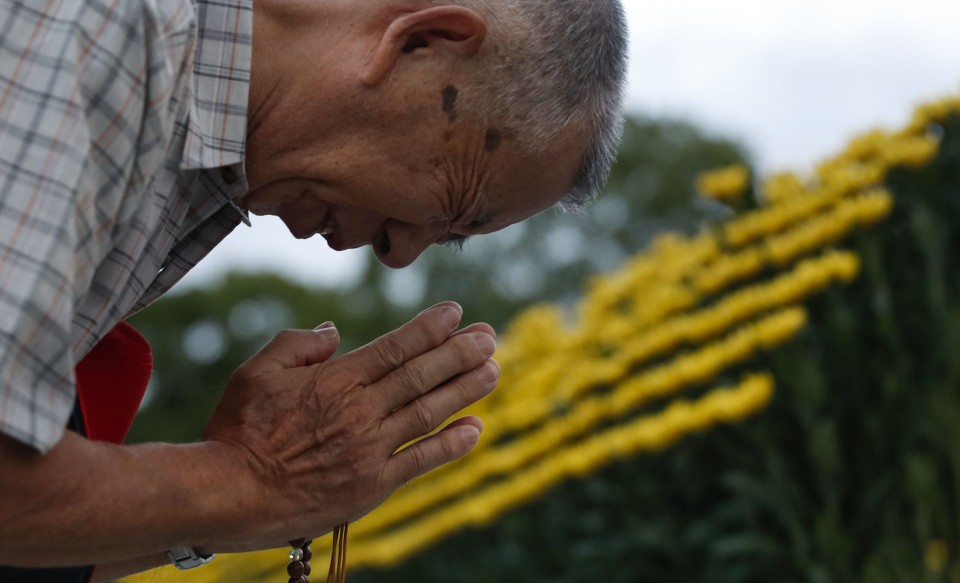 "Intolerance is itself a form of violence and an obstacle to the growth of a true democratic spirit," the mayor said, quoting Mahatma Gandhi, the leader of India's nonviolent independence movement against British rule.

He pointed out that "coming generations must never dismiss the atomic bombings and the war as mere events of the past."

To convey the reality of the atomic bombing, a Japanese classical "tanka" poem, written by a woman who survived the bombing at the age of 5, was cited in the declaration for the first time.

U.N. Secretary General Antonio Guterres said in his message, "The world is indebted to" people in Hiroshima and Nagasaki, the other A-bombed city, "for their courage and moral leadership in reminding us all about the human cost of nuclear war."

Pope Francis is scheduled to visit Hiroshima and Nagasaki in November during the first papal visit to Japan since John Paul II toured in February 1981.

Despite occasional heavy rain due to a typhoon, local people of all ages and tourists visited the Memorial Park from early morning to pay tribute to those who died in the bombing and wish for peace.

Yasuo Kubo, 74, who experienced the bombing as a baby, offered a prayer as he does every morning. But he feels "special" when the anniversary comes.

"We must not go to war again. Everyone will understand that if they come here."

Yumeka Yamamoto, a 19-year-old local university student, said classmates from other prefectures gave her a questioning look when she said she would go to the park on the morning of the anniversary. 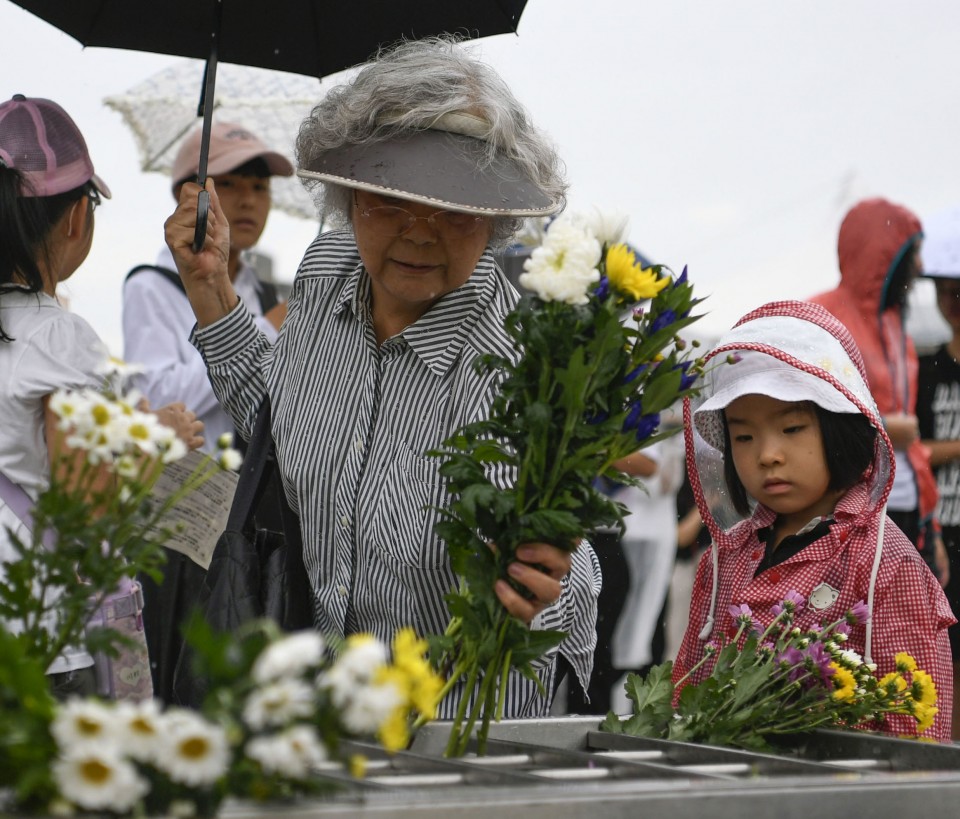 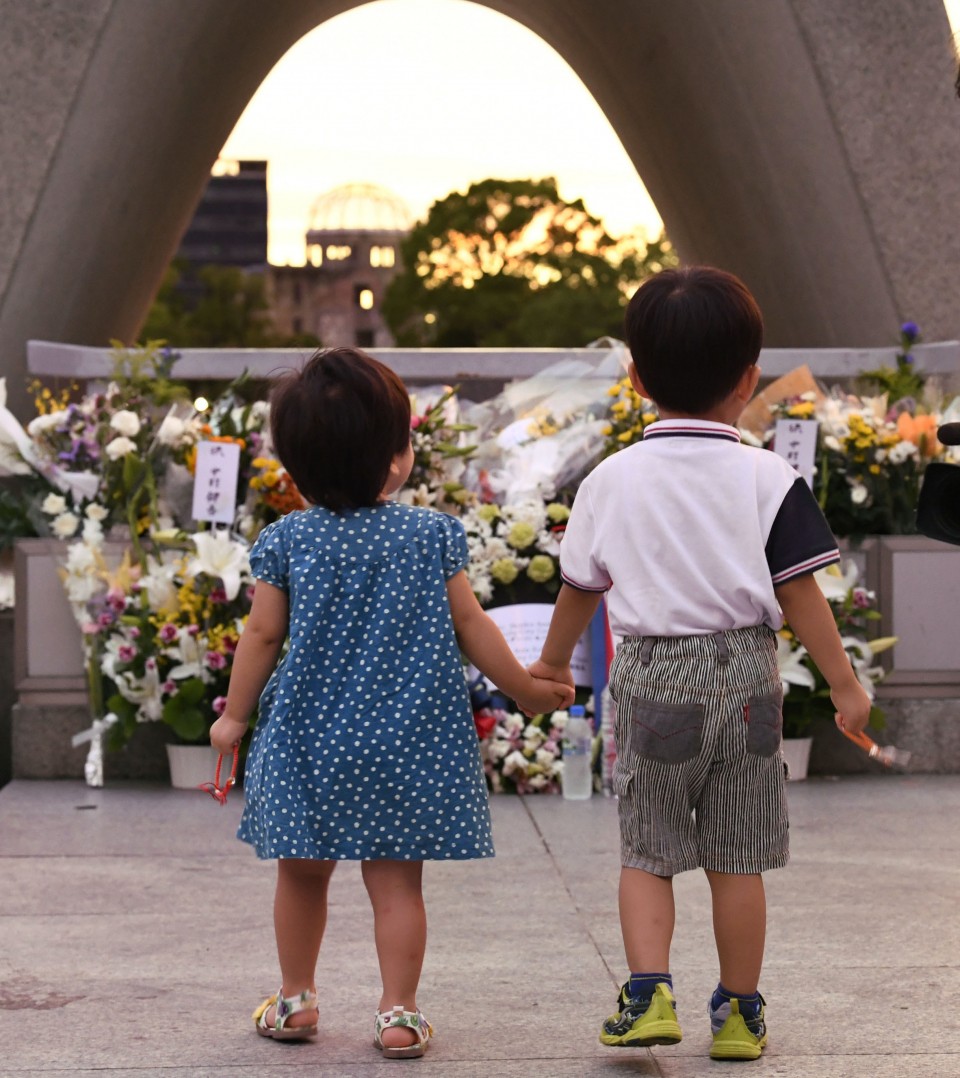 "I felt a bit sad. I want people outside Hiroshima to be more interested in (the atomic bombings)," she said.

A moment of silence was observed at 8:15 a.m., the exact time on Aug. 6, 1945, when a uranium-core atomic bomb named "Little Boy" dropped by a U.S. bomber exploded above Hiroshima killing an estimated 140,000 people by the end of that year.

A second atomic bomb was dropped on Nagasaki on Aug. 9 the same year and Japan surrendered six days later, bringing World War II to an end.

The combined number of surviving hibakusha from either bombing stood at 145,844 as of March, with their average age at 82.65.

The following is the full text of the Peace Declaration read Tuesday by Hiroshima Mayor Kazumi Matsui at a ceremony to mark the 74th anniversary of the atomic bombing of the city.

Around the world today, we see self-centered nationalism in ascendance, tensions heightened by international exclusivity and rivalry, with nuclear disarmament at a standstill.

What are we to make of these global phenomena?

Having undergone two world wars, our elders pursued an ideal -- a world beyond war. They undertook to construct a system of international cooperation. Should we not now recall and, for human survival, strive for that ideal world? I ask this especially of you, the youth who have never known war but will lead the future. For this purpose, I ask you to listen carefully to the hibakusha of Aug. 6, 1945.

A woman who was 5 then has written this poem:

A youth of 18 saw this: "They were nearly naked, their clothes burned to tatters, but I couldn't tell the men from the women. Hair gone, eyeballs popped out, lips and ears ripped off, skin hanging from faces, bodies covered in blood -- and so many." Today he insists, "We must never, ever allow this to happen to any future generation. We are enough." Appeals like these come from survivors who carry deep scars in body and soul. Are they reaching you?

"A single person is small and weak, but if each of us seeks peace, I'm sure we can stop the forces pushing for war." This woman was 15 at the time. Can we allow her faith to end up an empty wish?

Turning to the world, we do see that individuals have little power, but we also see many examples of the combined strength of multitudes achieving their goal. 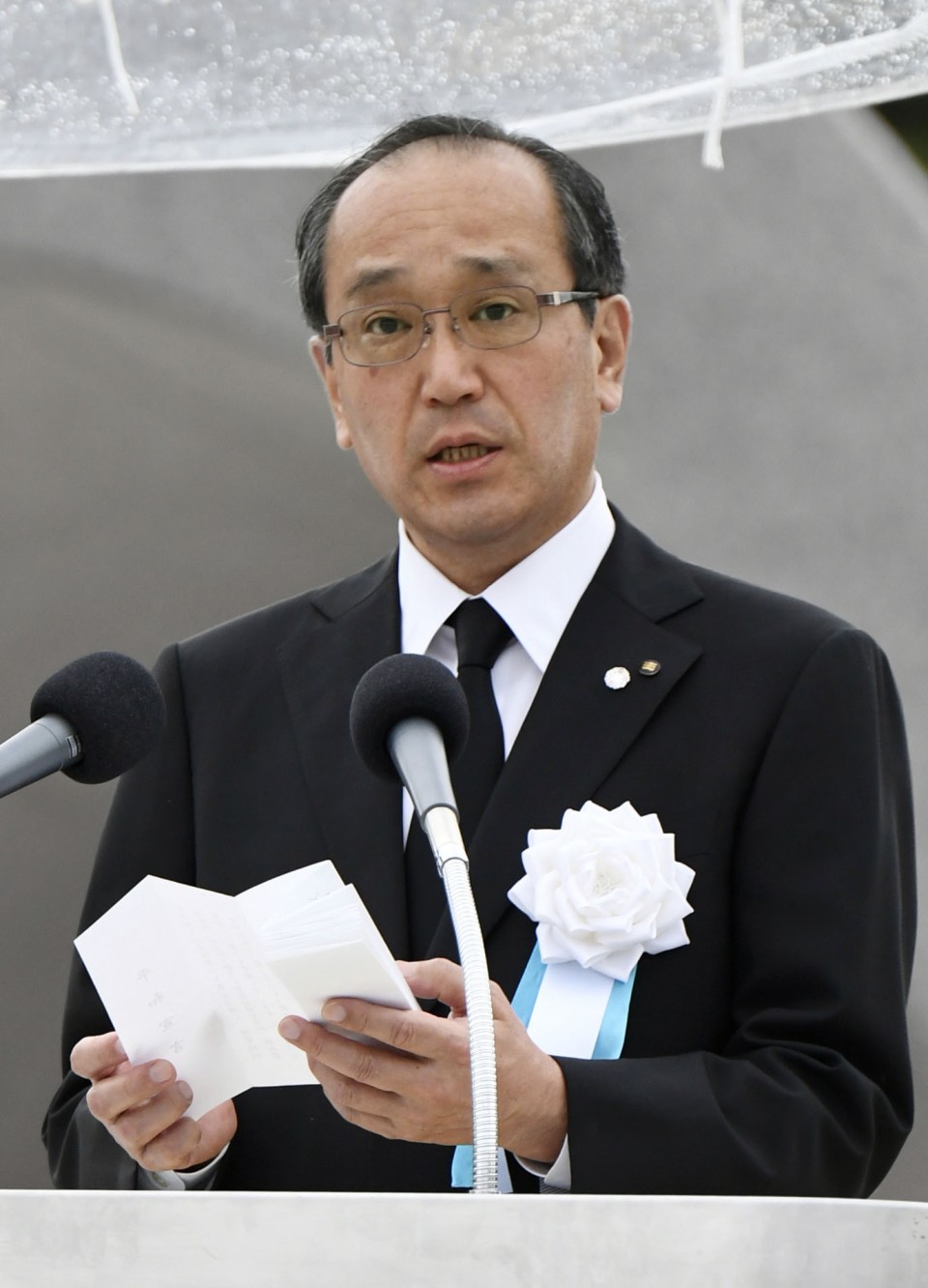 Indian independence is one such example. Mahatma Gandhi, who contributed to that independence through personal pain and suffering, left us these words, "Intolerance is itself a form of violence and an obstacle to the growth of a true democratic spirit." To confront our current circumstances and achieve a peaceful, sustainable world, we must transcend differences of status or opinion and strive together in a spirit of tolerance toward our ideal. To accomplish this, coming generations must never dismiss the atomic bombings and the war as mere events of the past. It is vital that they internalize the progress the hibakusha and others have made toward a peaceful world, then drive steadfastly forward.

World leaders must move forward with them, advancing civil society's ideal. This is why I urge them to visit the atomic-bombed cities, listen to the hibakusha, and tour the Peace Memorial Museum and the National Peace Memorial Hall to face what actually happened in the lives of individual victims and their loved ones. I want our current leaders to remember their courageous predecessors: when nuclear superpowers, the U.S. and U.S.S.R., were engaged in a tense, escalating nuclear arms race, their leaders manifested reason and turned to dialogue to seek disarmament.

This city, along with the nearly 7,800 member cities of Mayors for Peace, is spreading the Spirit of Hiroshima throughout civil society to create an environment supportive of leaders taking action for nuclear abolition. We want leaders around the world to pursue negotiations in good faith on nuclear disarmament, as mandated by Article VI of the Nuclear Non-Proliferation Treaty, and respond to the yearning of civil society for entry into force of the Treaty on the Prohibition of Nuclear Weapons (TPNW), a milestone on the road to a nuclear-weapon-free world.

I call on the government of the only country to experience a nuclear weapon in war to accede to the hibakusha's request that the TPNW be signed and ratified. I urge Japan's leaders to manifest the pacifism of the Japanese Constitution by displaying leadership in taking the next step toward a world free from nuclear weapons.

Furthermore, I demand policies that expand the "black rain areas" and improve assistance to the hibakusha, whose average age exceeds 82, as well as the many others whose minds, bodies and daily lives are still plagued by suffering due to the harmful effects of radiation.

Today, at this Peace Memorial Ceremony commemorating 74 years since the atomic bombing, we offer our heartfelt consolation to the souls of the atomic bomb victims and, in concert with the city of Nagasaki and kindred spirits around the world, we pledge to make every effort to achieve the total elimination of nuclear weapons and beyond that, a world of genuine, lasting peace.