A memorial service was held in the southeastern part of South Korea on the 74th anniversary of the atomic bombing of Hiroshima on Tuesday to remember the Korean victims and survivors who were exposed to the 1945 blast.

Hapcheon, where the service was held, is known as the "Hiroshima of South Korea," as it became home to many Koreans who repatriated from Hiroshima in the postwar years, including some who lived in a nursing home built with the support of the Japanese government.

"The nuclear weapons that exist today would cause far more damage than the ones in earlier times. We must strive for a world in which people understand one another," An Won Sang, a 76-year-old survivor, said as he paid respects to his deceased father and grandfather.

With ties between Japan and South Korea hitting their lowest point in years as tensions rise over trade and diplomatic disputes, An urged the two neighbors to stop feuding with each other. 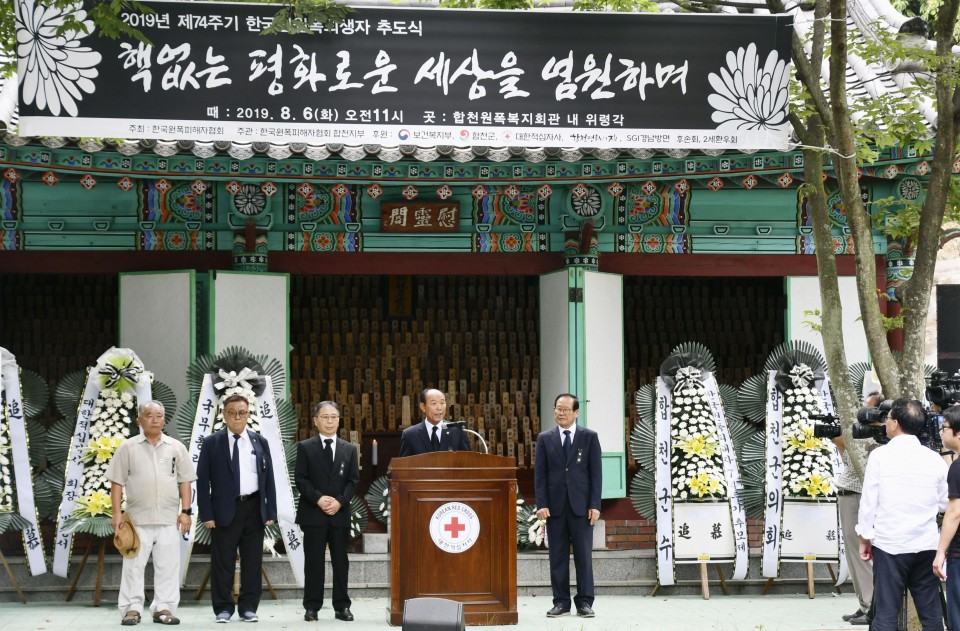 Japan, he said, "should acknowledge its past wrongs, and with that, we should reconcile with each other and go on with our lives."

The Republic of Korea National Red Cross has estimated that in Hiroshima and Nagasaki, which was bombed three days later in August 1945, a total of some 70,000 people from the Korean Peninsula were exposed to the atomic blasts or radiation from them.

Of those, about 40,000 died immediately. Of those who survived the bombings, about 23,000 are believed to have returned to the peninsula, which was freed from Japan's colonial rule with its surrender in World War II days after the blasts.

Many Hapcheon locals who went to Hiroshima during the last war returned after its end, creating a sizable community of Hiroshima atomic bombing survivors, according to a nursing home official.