The cultivation of "high-yield rice," an affordable alternative that can be harvested in larger quantities than premium rice brands, is growing in popularity as Japan seeks ways to counter rising ingredient costs in restaurant chains and ready-made meals.

Increasingly regarded as a "savior" from a cost perspective, this variety of rice has caught on in large-scale farms and is now gradually penetrating the entire industry, drawing the attention of agricultural cooperatives across the country.

In Yoro, Gifu Prefecture, located on the western tip of the Nobi Plain, a yellow signboard featuring the logo of Curry House CoCo Ichibanya stands in a paddy field.

The Nishimino branch of the Japan Agricultural Cooperatives group has been partnering with farmers under its jurisdiction to cultivate a variety of high-yield rice called Hoshijirushi to sell to the local outlet of the restaurant chain.

"The farmers feel motivated because they can anticipate income when their rice is used in the nearby outlet. And the outlet doesn't need to search for a place to get cheap rice, so it's a win-win for all," said JA Nishimino's chief of sales Takahiro Ito.

Japan's food service industry has struggled to maintain profits amid rising ingredient and labor costs, causing even chains like CoCo Ichibanya to raise prices for their key dishes this March. The popular curry house is now in its second year of working with JA Nishimino, but promising results have prompted it to further expand its transaction quantity, which currently stands at around 20 hectares' worth of production. 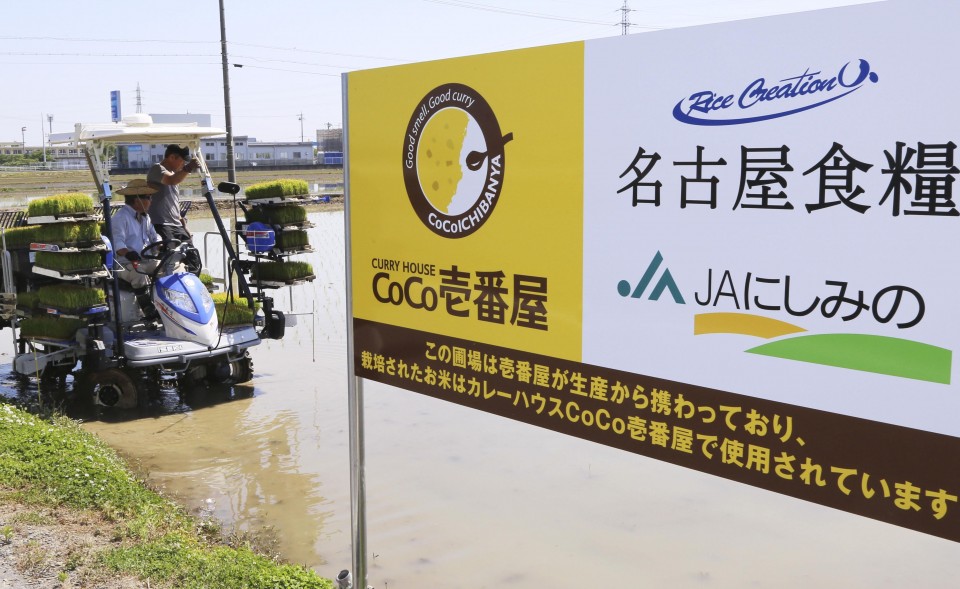 Rice prices have been on an upward trend in recent years, with a fall in supply due to farmers shifting to harvesting soybeans, animal feed and other crops seen as one of the causes of the hike.

Other ingredient prices are also rising on higher import and distribution costs, while higher labor costs spawned by the rapidly greying population are also a drag on the country's food service industry.

The Akidawara-type rice grown in prefectures including Niigata, Toyama and Shiga, and the Moeminori-type rice grown in Akita and Miyagi prefectures, amongst others, are well-known varieties of high-yield rice, producing harvests up to 40 percent bigger than premium rice brands such as Koshihikari and Akitakomachi.

Although they fetch 10 to 20 percent less due to their taste quality, farmers are able to offset the drop with the total amount produced and actually end up earning more, according to Kumakura.

Even in Uonuma, Niigata Prefecture, home of the finest Koshihikari brand of rice, farmers now seek to strategically increase production of high-yield rice while maintaining their usual harvests.

In June, the Echigo Joetsu unit of the Japan Agricultural Cooperatives group, also located in the prefecture, established a review panel to provide information on the proper way to cultivate high-yield rice, with the aim of easing the concerns of farmers used to growing Koshihikari-type rice.

With strong payoffs, the cultivation of the crop has spread rapidly. Around 1,000 hectares was planted this year in areas under the cooperative's jurisdiction, more than 10 times the amount two years ago.