Economic minister Toshimitsu Motegi said Tuesday that Japan will not grant the United States greater access to its agricultural market than previously agreed under the Trans-Pacific Partnership regional trade pact, pushing back against pressure from U.S. President Donald Trump.

"Japan and the United States have agreed to hold discussions for a trade deal in line with the joint statement released in September. In the statement, it clearly states that 'market access as reflected in Japan's previous economic partnership agreements constitute the maximum level,'" Motegi told a press conference.

Motegi, Japan's top trade negotiator with the United States, was reacting to Trump's insistence on Monday that he has "nothing to do with TPP" and that he is "not bound by anything that anybody else signs with respect to the United States." 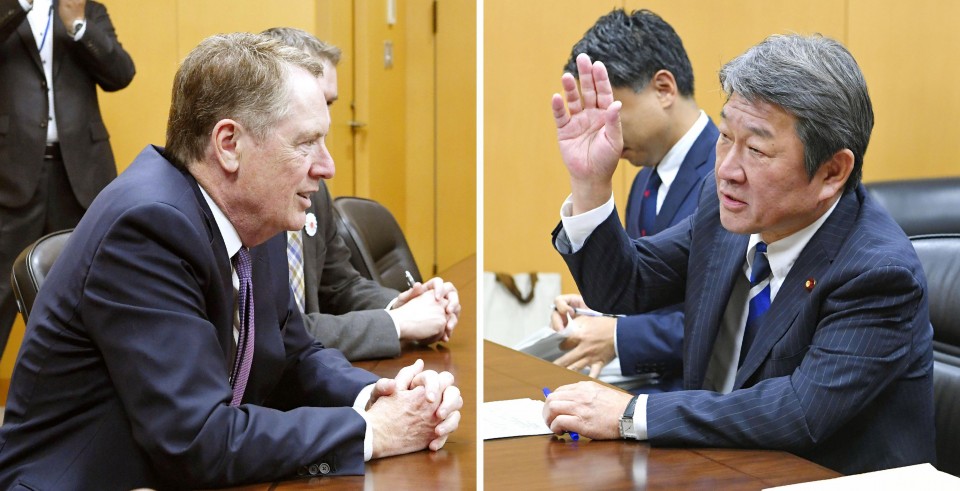 "TPP would've destroyed our automobile industry and many of our manufacturers. We are not involved in TPP. So what other countries agreed to is not binding at all on the United States," Trump said at a press conference with Prime Minister Shinzo Abe in Tokyo after their official talks.

Trump's remarks appeared to go against the joint statement between the leaders that laid out the framework for negotiations on a bilateral trade deal after the United States withdrew from the TPP, which entered into force in a revised form for six of the remaining 11 members at the end of last year.

That has put American farmers at a disadvantage against other agricultural exporters such as Australia and New Zealand, prompting Trump to push for Japan to lower tariffs on products such as beef, pork and wheat.

Trump also said Monday that he expects to be able to make an announcement on a trade deal "probably in August" that will be beneficial to both countries.

Motegi waved this off as wishful thinking, saying there is no set timeline for a trade deal and that Trump was "merely voicing his hope for discussions to advance quickly."

In addition to agriculture, the countries remain apart on the level of access for industrial products such as automobiles, one of Japan's biggest exports.

Japan, U.S. to make announcements on trade in August: Trump

Japan braces for more pressure from Trump on trade after July