With the 2019 Rugby World Cup set to kick off next month, ground staff at the tournament's 12 venues are working to ensure all 48 matches are played on surfaces befitting the sport's showpiece event.

Among the World Cup stadiums spread across Japan, five have fields composed of hybrid grass, which combines natural grass with artificial fibers for added durability.

Kobe Misaki Stadium (Noevir Stadium), which will host four World Cup matches, was the first rugby or soccer stadium in Japan to introduce hybrid turf in 2018.

Home to J-League first-division soccer club Vissel Kobe, the stadium has a retractable roof that for many years hampered grass maintenance with poor sunlight and ventilation, according to Vissel's ground manager Hiroya Niimi.

The pitch condition had been bad enough at times to warrant complaints from players. In search of a solution, Niimi visited stadiums in Germany and Britain in the summer of 2015 to see how they handled such problems. He learned about hybrid grass during the trip. 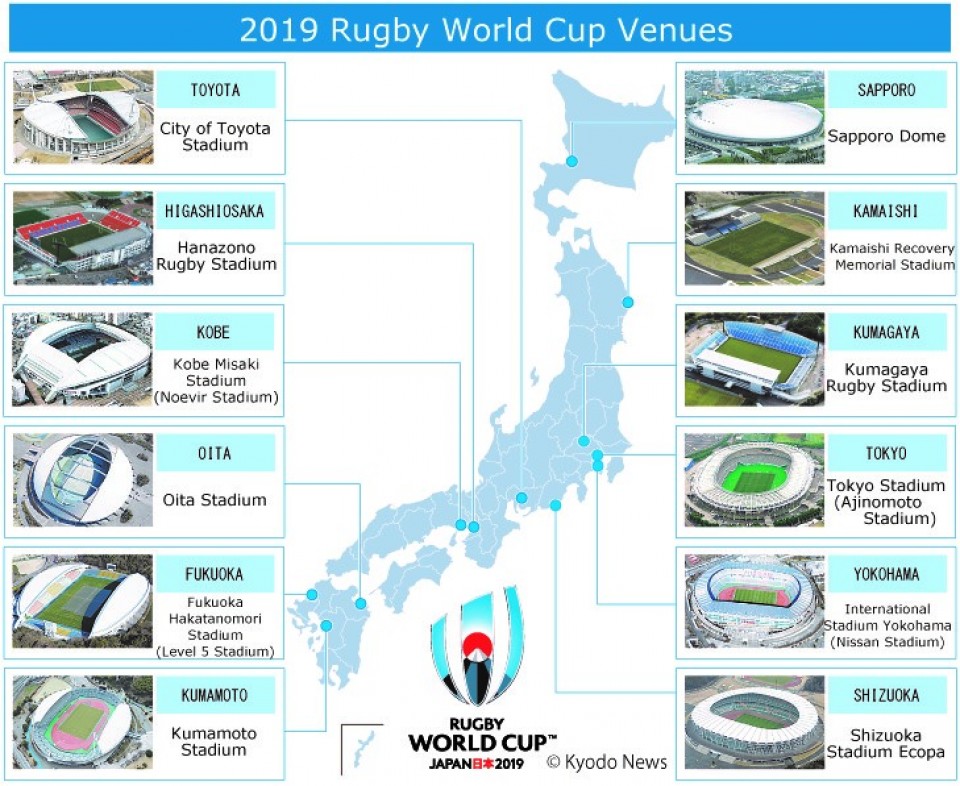 Rugby: Japan bumped up to 9th in world rankings after winning PNC

Kobe Misaki Stadium's new turf comprises natural grass and polyethylene fiber. The roots of the grass are interwoven with panels of the artificial material, making the playing surface more resistant to the wear and tear of professional football matches.

Since the installation of the turf, Niimi has continued to fine-tune maintenance techniques, supplementing sunlight with artificial light sources, and introducing a machine that circulates air through the ground, preventing the buildup of bacteria in the soil.

In addition to receiving positive feedback from players, Vissel has fielded inquiries from Spanish giants Barcelona which had installed a hybrid turf pitch ahead of the Japanese club.

"There were no problems when Japan played a rugby test match here last year," Niimi said, adding he is looking forward to seeing the first World Cup match at the ground in September.

In addition to Kobe, World Cup venues in Tokyo, Yokohama, Oita and Kamaishi, Iwate Prefecture, will use hybrid grass.

Known as one of Japanese rugby's hallowed grounds, Hanazono Rugby Stadium in Osaka Prefecture maintains a tradition of all-natural grass.

The first purpose-built rugby stadium in Japan, Hanazono is home to professional rugby club the Kintetsu Liners. Koichi Tojimbara, an employee of Kintetsu Leisure Service Co., works on the maintenance of the turf.

"The most important thing is to protect the players," Tojimbara, 47, said.

Resembling a thick, green carpet, the turf at Hanazono is comprised of blades of grass grown to a length of 39 millimeters, much longer than the average for soccer pitches of 10-20 mm. The additional length reduces the strain on the legs of rugby players as they scrummage.

At Hanazono, cool-season grass species are overseeded into warm-season grasses to retain a green color all year long. The grass types have been carefully selected as they have to be able to withstand impact and have the ability to repair quickly.

Tojimbara and his team have been conducting repeated tests to adjust the timing of sowing and fertilizing since Hanazono and 11 other venues were selected four years ago to host the 2019 tournament.

Following a spell of rains and low temperatures in June and July, Tojimbara has felt some concerns about the growth of the grass.

"I want it to be in good condition for the start (of the World Cup)," he said.