After several high-profile incidents in recent years highlighted Japan's problems with sexism, a Japanese women's studies pioneer has been presented a special recognition from Finland, a leading country in promoting gender equality.

Chizuko Ueno, a sociologist and a prominent feminist figure in Japan, was one of the first 16 recipients from around the world to receive the Han Honours. She was acknowledged for her "tirelessly and fearlessly" work toward gender equality, according to the Finland Promotion Board.

Through her research, books and activities, Ueno has continuously provoked debates in issues including gender discrimination and sexual violence.

In April, Ueno gave an impassioned and unfiltered speech at the University of Tokyo matriculation ceremony, in which she said the nation's top university is not immune from gender problems and, like any major institution, reflects society's tendency to discriminate against women. 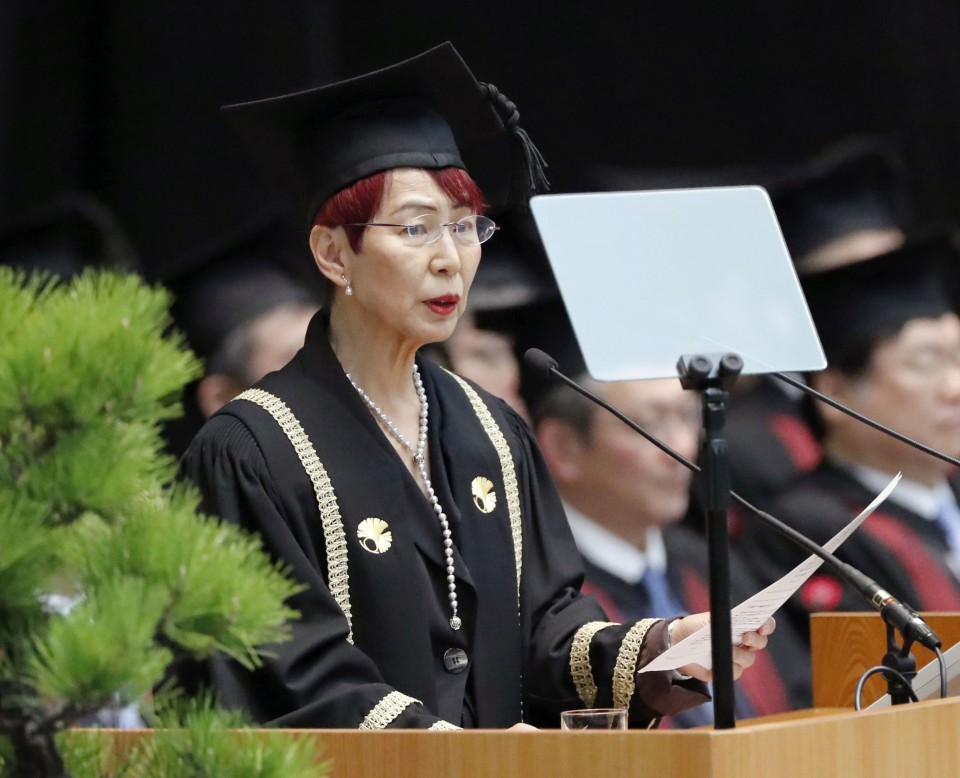 The 70-year-old scholar, who is also a chief director of NPO Women's Action Network, pointed out that less than 20 percent of students entering the University of Tokyo are female. This is despite there being plentiful evidence that female applicants have higher standard scores than their male competitors.

Ueno said one reason for the discrepancy is the gender discrimination that is inherent in the education investment decisions made by Japanese parents. Traditionally, sons are expected to attend university while daughters will often be enrolled in junior colleges.

Even Todai female students feel compelled to conform to Japanese social norms. Ueno gave the example of such students hiding the fact that they were able to enter the prestigious institution in order not to show up male students from other universities, but when the roles are reversed, male students are happy to boast.

She also referred to a criminal case in which five male students sexually abused a female student that attended a private university. One of the accused said during his court hearing that he had looked down on women because they are "stupid." 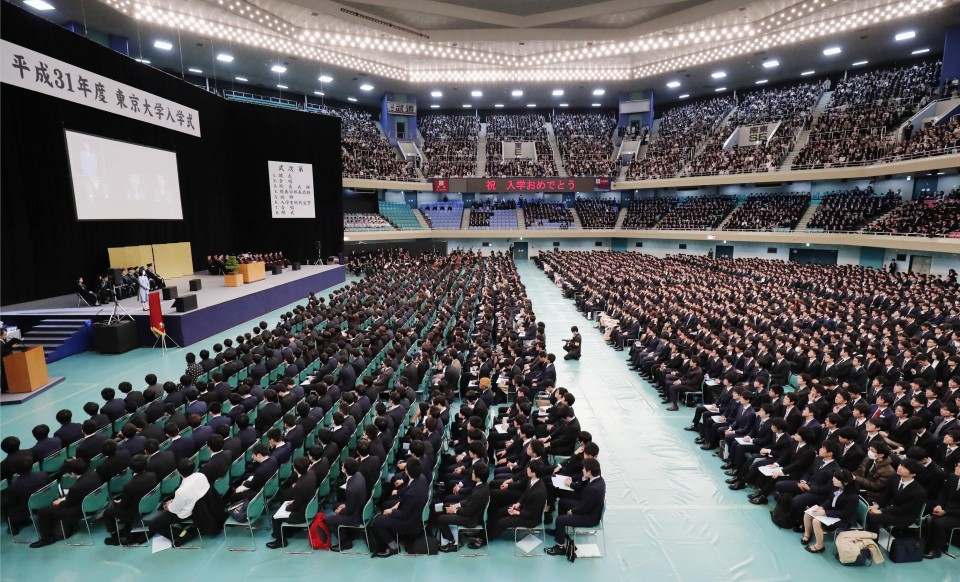 Ueno reminded newly enrolled students who prevailed against their peers in the fierce entrance exams that they can thank their good circumstances as much as their hard work for them getting to where they are. She said they were lucky to have people around them who encouraged them, supported them, lent a helping hand, and recognized their accomplishments.

"There are people whose drive is dampened even before they try because of negative comments or thoughts like 'You won't succeed no matter what' or 'After all, nobody believes in me,'" she said. "I hope you won't focus your efforts only to win the game for yourself."

"I hope you will use your gifted talents and favorable environment to help those who are less fortunate, and do not denigrate them. And I hope you live your life by accepting who you are even with your weaknesses and by helping and supporting each other," she continued.

The scholar told Kyodo News that, at first, she thought of declining the offer to give the speech.

After considering the social situation in Japan and learning that there were people in the university who worked hard to nominate her, she decided to go ahead. 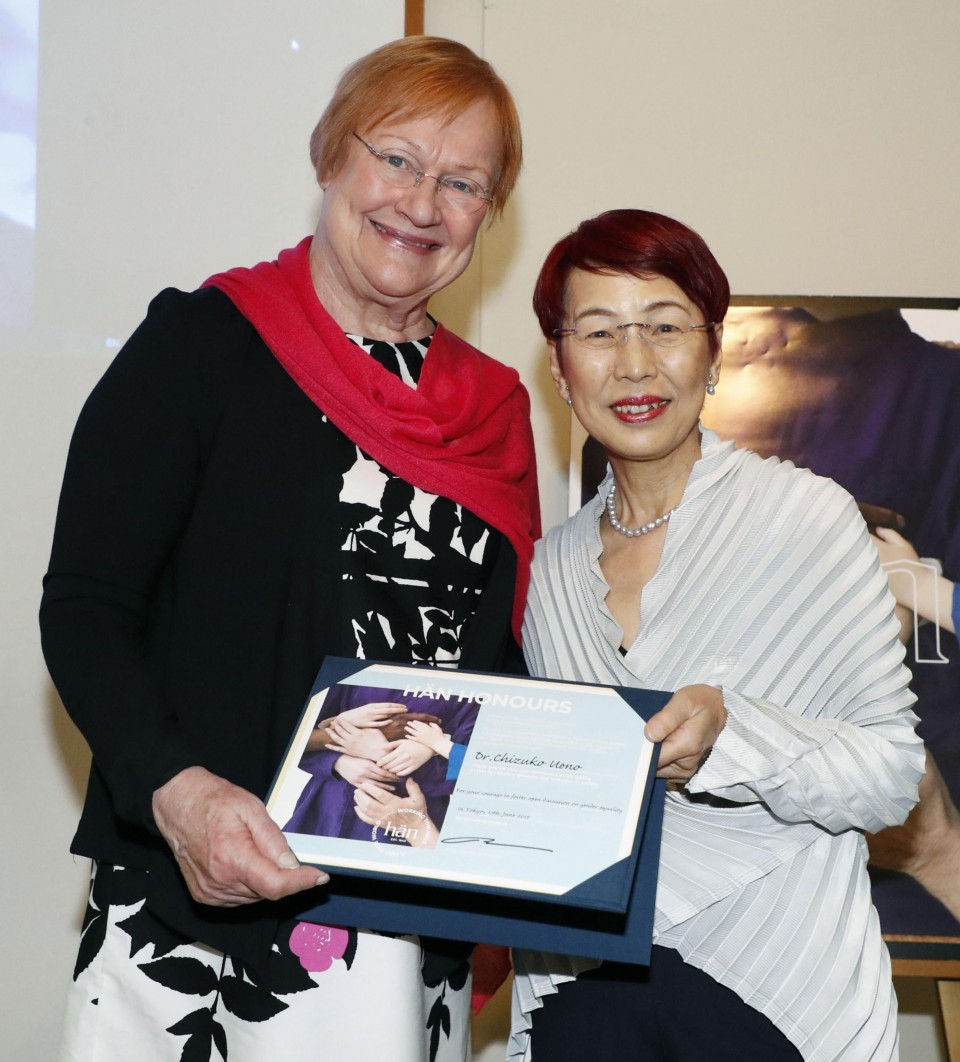 Ueno said no one tried to intervene in or censor her speech, in which, when explaining women's studies, she covered topics like what women used before tampons and sanitary napkins were ubiquitous, as well as the plight of sexual minorities in Japan.

"I appreciate the trust the university administration placed in me," she said.

The scholar said discrimination against women in Japan is the consequence of political mistakes in the past decades, and thus "a human disaster."

As globalization changed the world, all societies looked to bring women into the labor market, requiring the domestic burden they traditionally carried to be transferred.

While Northern Europe and North America relied on care service in the public sector or cheap labor in the market, countries such as Italy, Spain, Greece, South Korea and Japan looked to a strong male breadwinner model.

The model, in which men earn a living and women tended to domestic and care duties, "privatized" unpaid work in which grandmothers were called upon to care for younger family members, Ueno said.

"But now, none of these options work in Japan," she said, adding that "what has happened is that gender has become something functionally equivalent to race or class in other societies."

The aftermath of a political decision manifested in the fertility rate, Ueno said.

Countries with a male breadwinner model have the lowest fertility rate, with Japan at 1.42 as of 2018 -- well below the 2.07 necessary to sustain the population. The rate figure represents the average number of children a woman will bear in her lifetime.

Although Japan's equal employment opportunity law came into force in 1986, women's double burden of work and family care has not changed. Combined with the easing of a series of labor regulations, the number of irregular workers increased dramatically.

According to the Ministry of Internal Affairs and Communications, 56.8 percent of female workers were in irregular employment as of January 2019, more than twice the percentage as male workers.

But with neo-liberalism pushing "self-determinism and self- responsibility" as a principle, the most socially vulnerable were made to believe that they are at fault for efforts that fail to pay off, while the people with the most advantages believe they owe their success solely to their own abilities, Ueno explained.

"This is what I've been saying is wrong," she said.

Although it is hard to change this trajectory immediately, Ueno says there are changes afoot.

"It's not true that the #MeToo movement did not spread in Japan," Ueno said, pointing to women who took to the streets to denounce Finance Minister Taro Aso after his comments that seemed to make light of an alleged case of sexual harassment by then-Vice Finance Minister Junichi Fukuda.

A man alleged to be Fukuda can be heard asking in an audio clip released by the Shukan Shincho magazine, "Can I give you a hug?" and "Can I touch your breasts?" Fukuda stepped down after the accusations but has continued to deny them.

Aso, a 78-year-old former prime minister, came under fire after saying that there is "no such thing as a sexual harassment charge."

"It's not the same as charges of murder or sexual assault," he told reporters. But in Japan, perpetrators of sexual harassment can be charged with crimes, including sexual assault, rape, or libel.

The protesters included women lining the sidewalk in front of the Finance Ministry building in Tokyo holding signs reading "We won't condone sexual harassment" and "#WithYou" in a show of solidarity with victims of sexual abuse.

Similar protests, organized via social media by women's rights activists, were held in Kyoto and Sapporo.

Another significant shift is coming from older Japanese women apologizing to younger women for failing to raise their voices against sexual abuse in the past.

In an online edition of magazine Hon no Mado, Kyoko Nakajima, a writer in her 50s, lamented that she had not been more vocal when journalist Shiori Ito, born in 1989, shocked the country by alleging a high-profile journalist had raped her, only to suffer an intense public backlash.

"If our generation had raised our voices, society might have changed, even a little," Nakajima reportedly told Ito. "I am really sorry for (leaving) the situation where you had to persevere on your own."

"There are no young women now who think men are better than them," Ueno said. "The problem lies in society, whether it is ready for them or not."

After the matriculation ceremony, the University of Tokyo newspaper conducted an online questionnaire and received answers from 4,921 people, including 603 students.

"As a graduate of a public high school in a rural region, I feel that one's environment hugely impacts their further education," a male fourth-year law student wrote when explaining why he appreciated Ueno's speech.

"I think those of us who successfully entered the University of Tokyo for some reason, have to bear a responsibility to make society better in any way."

Many respondents reserved judgment, and those who disapproved of the speech argued that Ueno's interpretation was arbitrary or unsuitable for a celebratory occasion, the report said.

But one third-year female arts and sciences student said the speech had a massive impact.

"I think the speech described well the situation of female students in the university as well as women and minorities in society," she wrote.