As Emperor Naruhito ascended the throne on Wednesday, a key imperial succession ritual related to Shinto rekindled controversy over the separation of state and religion stipulated in the Constitution.

Shinto is a Japanese indigenous religion in which the emperor is venerated as a descendant of a sun goddess. In the ritual, the emperor inherited the imperial regalia, which are said to have been bestowed by the sun goddess Amaterasu Omikami as proof of his ascension to the throne.

As the "Kenji to Shokei no gi" rite marking the emperor's enthronement was staged as a state occasion financed by public funds, critics pointed to the possibility that it violated the Constitution banning the government from engaging in religious activities.

Japan's postwar Constitution stipulates no religious organization shall receive any privileges from the state or exercise any political authority.

The regalia, called "Sanshu no Jingi," consist of a sacred mirror, sword and jewel. In the ritual, the jewel and a replica of the sword were passed to the new monarch together with the state and privy seals.

Besides the regalia inheritance ceremony, the government decided in April last year to publicly fund the main Shinto-linked imperial succession rituals to be held in the fall, following the precedent set at those for former Emperor Akihito held in 1990. 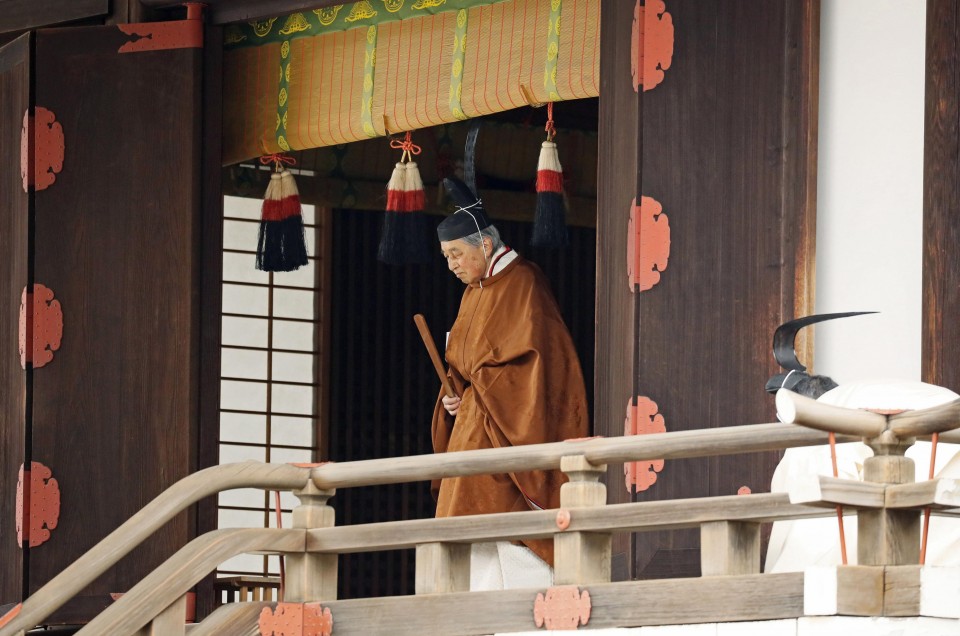 The upcoming key rituals are "Sokuirei Seiden no gi" on Oct. 22 to proclaim the enthronement of the emperor and the Daijosai grand thanksgiving rite in November, in which the emperor will make offerings to ancestral deities and pray for the peace and prosperity of Japan and its people.

The government has acknowledged that the Daijosai has a religious aspect but decided to use state funds, maintaining that the Constitution stipulates imperial successions and thus it should be staged as a public event.

The current administration of Prime Minister Shinzo Abe decided to follow the tradition after discussing how to stage imperial succession rituals in only three meetings, saying the previous rites had been conducted after "thorough discussions."

However, Crown Prince Fumihito, the younger brother of Emperor Naruhito, questioned the government's decision in a press conference last November, saying, "I'm not sure whether it is appropriate to cover the highly religious event with state funds."

In relation to the previous imperial succession, a number of lawsuits contesting the constitutionality of the rites were filed across Japan.

While all of them were dismissed, a 1995 Osaka High Court ruling pointed out that doubts remain whether the government financing of Shinto-linked rituals breaches the Constitution.

As for this time, similar lawsuits were filed in December by 241 citizens, including Christians and Buddhists. The Tokyo High Court has dismissed the plaintiffs' requests to suspend the state funding, but a damages suit against the government is pending at the Tokyo District Court.