Why Studio Ghibli fans are flocking to this rural Australian bakery

A bakery in a tiny, rural town in northeast Tasmania has become an unlikely pilgrimage site for Japanese tourists and Studio Ghibli animation fans alike.

No one is quite sure how or when the Ross Village Bakery became a cult tourist destination, but rumor has it the shop, located in a quaint former convict settlement, was the inspiration for a key location in the Hayao Miyazaki animated classic "Kiki's Delivery Service."

Bakery owner Carl Crosby explains that visitors first started arriving about 25 years ago, back when his partner's parents ran the business. 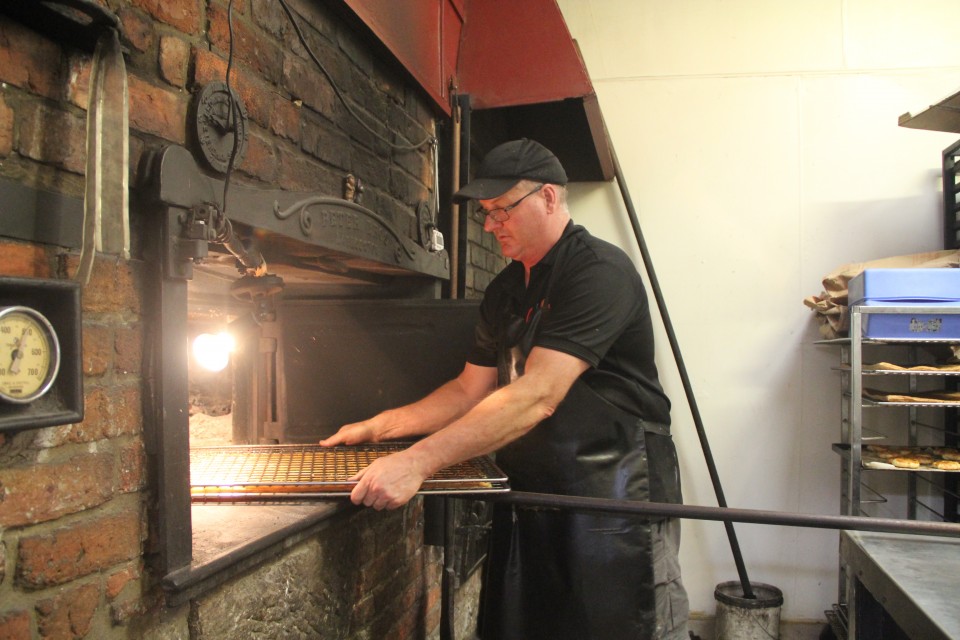 "Kirsty's parents were wondering why everyone was coming here, and they started asking questions instead of answering them and found out that it was assumed the movie had been inspired by the bakery," the 55-year-old said.

Released in Japan in 1989, "Kiki's Delivery Service" is a coming-of-age story about 13-year-old witch Kiki who, together with her black cat Jiji, moves to a distant seaside village to complete her witch training.

While in her new home, Kiki is taken in by the owners of a local bakery, who allow her to live above their shop in a spare attic room.

Studio Ghibli has neither confirmed nor denied that Ross is the basis for the Gutiokipanja Bakery in the animation, adding to the mystery of how fans came to find the Ross Village Bakery in the first place.

With its ornate, wrought iron doors, the bakery's 168-year-old wood-fired oven is the star attraction of the shop among Kiki fans.

Despite being located behind the bakery's service area, Crosby takes guests back into the kitchen during quieter periods and allows them to see the antique up close.

"We try to keep this area (in front of the oven) clean enough that people can come in and take pictures because it happens twenty-four seven," Crosby says as he attends to some pastry which forms part of the bakery's famous vanilla slice.

During the peak summer holiday period, Crosby says roughly half of the customers are so-called "friends of Kiki," meaning up to 200 people per day could be interested in seeing the oven or "Kiki's Room," the small attic above the bakery available for fans who wish to stay the night.

While all fans are excited to see Kiki's Room, Crosby says it's travelers from Japan who express the most delight when they see the small two-bed loft space. 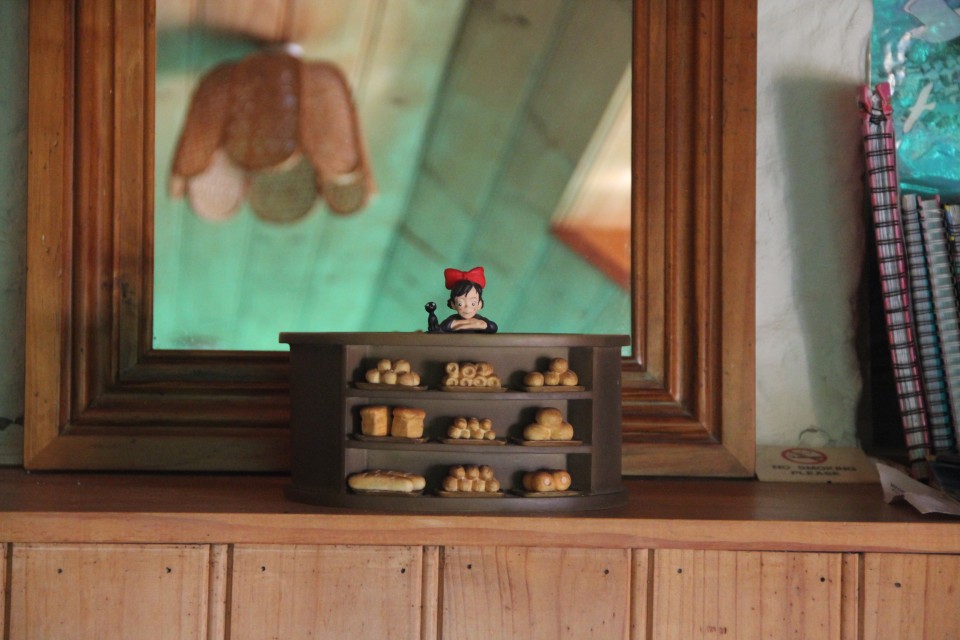 "People love it. They walk in there and they go up the stairs and all of a sudden you see the magic in their eyes and why they're here," he says.

"The animation of them with their laughter and giggles is pretty priceless sometimes."

Crosby says some fans dive head first into the experience, making their stay at Ross Village Bakery as immersive as possible.

"We had a Japanese guy walk up the street dressed like Kiki one day to check into the room. Nothing but a black dress, red shoes and a bow in his hair," he says with a laugh.

The guest subsequently donated the outfit to the bakery and Crosby leaves the bow in the bedroom for people to take photos of.

Over the years, visitors to Kiki's Room have signed guestbooks which the bakery has kept, featuring messages written predominantly in English and Japanese, as well as fan art.

But with the exception of the antique oven and the attic bedroom, visitors to the bakery could be forgiven for mistaking the shop for any other Australian country-town bakery.

However, Craig Norris, a University of Tasmania lecturer who wrote an academic paper on the pilgrimage phenomenon in 2013, says the connection between the bakery in Kiki's story goes beyond visual similarities.

After reading through the archive of messages in the visitor's books, Norris, 44, found young Japanese travelers were identifying with Kiki's journey toward adulthood, and saw their visit to the bakery as a way of helping them explain their own experiences.

"The fans themselves, or more accurately probably working-holiday visa holders in Australia or people who studied in Australia, who have faced adversity have made sense of their experience through Kiki at that moment in time, being in the bakery," he says, pointing out that living and working in regional Australia presents linguistic and cultural challenges which may make people feel isolated.

"So the bakery is a way of helping them use popular culture almost as a resource to make sense of that challenge." 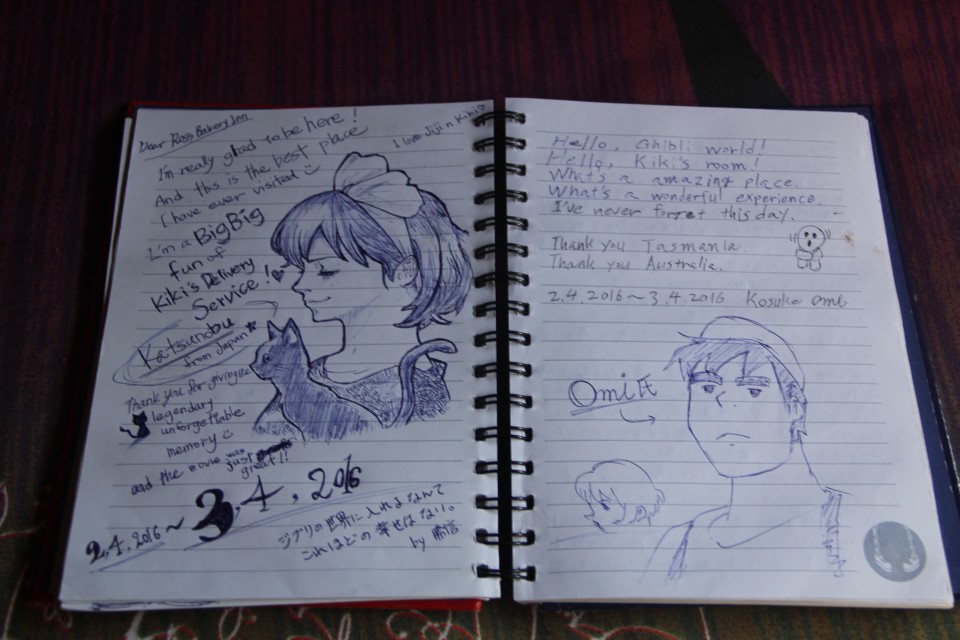 Norris suggests the location of the bakery itself, an hour-and-a-half north of the state capital Hobart along a winding, almost uninhabited freeway, adds to a sense of achievement when visitors reach their destination.

As a result, the bakery's popularity continues to thrive among Ghibli fans, despite not receiving official confirmation from the animation studio.

"At the Ross bakery there is a different type of authenticity happening. It's not a story of how something came to be made but more the ownership of it within the audience itself."

The lack of a rubber stamp of approval is also a blessing in disguise for the bakery owners.

"This way we don't have to get into the trademark world. Otherwise we need to have a surcharge on every time we say 'Kiki's Delivery Service' or 'Jiji'," Crosby says.

As the popularity of Studio Ghibli animations continues to spread to other parts of the world, Crosby has noticed more fans from other backgrounds have begun to make the pilgrimage, suggesting the reputation of Ross Village Bakery will also continue to grow.

"I think as long as there are international students and working-holiday visa holders who identify themselves as kind of alien while in Australia, I think Kiki and the bakery will continue," Norris said.