5,000 typhoon-stranded people being ferried out of Osaka's Kansai airport

A powerful typhoon rip through western Japan on Tuesday, leaving at least seven people dead and more than 200 injured, while strong winds and high waves closed Kansai International Airport and caused a ship to smash into a bridge linking the airport with the main island.

Winds of up to 209 kilometers per hour early Tuesday afternoon raked the airport, where one of the two runways and basement floor of a terminal building flooded and around 5,000 people were stranded, according to local authorities.

After passing the southern part of Tokushima Prefecture, the typhoon passed near Kobe and moved into the Sea of Japan, the Japan Meteorological Agency said. Flights and train services were canceled in the Kinki region and elsewhere, while factories and commercial facilities such as Universal Studios Japan, a popular theme park in Osaka, were closed.

A man working inside a warehouse in Shiga Prefecture died after the building collapsed, while another man fell to his death from the second floor of a house in Osaka, apparently because of strong wind, police said.

A man in his 70s fell to his death while repairing a roof in Yokkaichi, Mie Prefecture, apparently due to strong winds, local firefighters said.

The other victims were also Osaka residents. An elderly man was confirmed dead after he was found on the balcony of a housing complex, apparently after he fell from an upper floor. 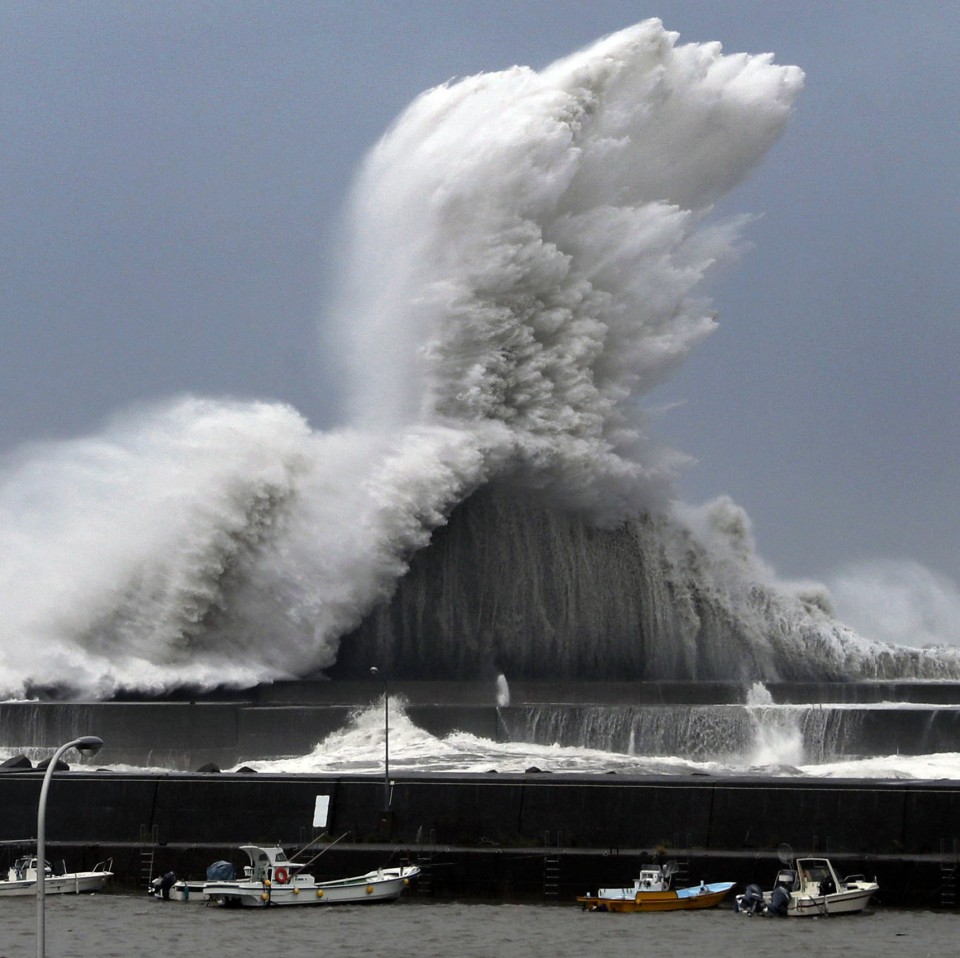 Three others who died are believed to have been hit by a door gate, a cooler box and another object turned into lethal projectiles by typhoon winds, the police said.

Strong winds blew in areas far from the typhoon including the Tokyo metropolitan area. Four people were hurt as a roof fell on them on a street in Hachioji, western Tokyo.

A number of trucks were tipped over by the wind on the Meishin Expressway in Shiga Prefecture, police said. Another truck was nearly blown off a bridge connecting Shikoku island and the main island of Honshu.

In Osaka Bay, a tanker was swept from its mooring and propelled into a bridge connecting Kansai International Airport and the city of Izumisano in Osaka Prefecture, according to the Japan Coast Guard. The tanker and bridge were both damaged but the ship's crew were unhurt. 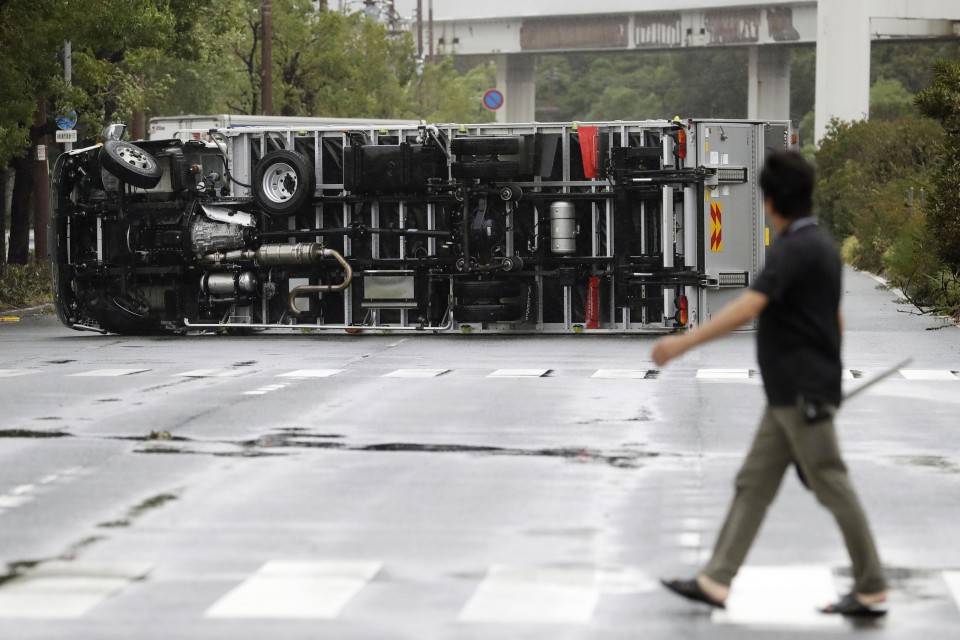 (An overturned truck in Osaka)

Dozens of other ships were swept from their moorings in Kobe-Osaka Port but the crews are all apparently safe, according to the coast guard.

Cultural assets such as ancient temples in Kyoto, Nara and Shiga were also damaged by the typhoon.

Jebi became the first typhoon categorized as "very strong" by the weather agency to make landfall on Japan's main islands since 1993 when a powerful typhoon left 48 people dead or missing.

As of 8 p.m. Tuesday, Jebi was traveling at a speed of 75 kph over the sea off Sado Island, and packing winds of up to 180 kph with an atmospheric pressure of 970 hectopascals at its center.

Japan has been hit by a succession of typhoons recently, with western parts of the country devastated by massive flooding and landslides that left more than 220 people dead in July.

Prime Minister Shinzo Abe was forced to cancel a planned visit to southwestern prefectures on Tuesday. 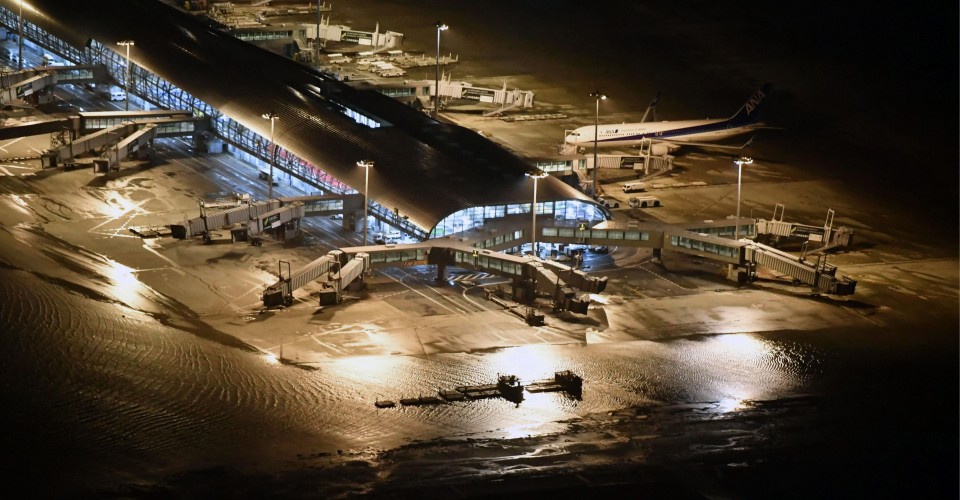 The weather agency said the typhoon is expected to travel to an area west of Hokkaido and weaken to an extratropical cyclone by Wednesday morning.

Transportation operations and businesses were significantly affected by the typhoon.

Domestic airlines canceled over 700 local and international flights, mainly scheduled to depart from or arrive at airports in western and central Japan. Railway operators also halted some services, including on the Tokaido Shinkansen and Sanyo Shinkansen lines, while some expressways were closed.

Toyota Motor Corp. said it will suspend its nighttime operations at 14 plants across the nation, including in Aichi, Fukuoka and Miyagi prefectures.

Department stores in western Japan, including outlets in Osaka and Kyoto prefectures, closed for the day. Nagoya in central Japan also closed tourist sites such as Nagoya Castle.