Thousands of passengers were evacuated Wednesday from flooded Kansai International Airport, which will remain closed for about a week due to the damage wreaked by a powerful typhoon that killed 11 and injured over 400 across western Japan the previous day.

A day after one of the strongest typhoons to strike Japan's main islands in decades, concern increased about the impact of a prolonged closure of the country's third-largest airport on local businesses, trade and tourism.

Airport officials said it may take about a week to reopen the airport if damage to its runway and facilities is serious.

At the airport built on a manmade island in Osaka Bay and used by 80,000 passengers a day, a runway and a terminal building were flooded Tuesday amid high tides as Typhoon Jebi barreled through western Japan. 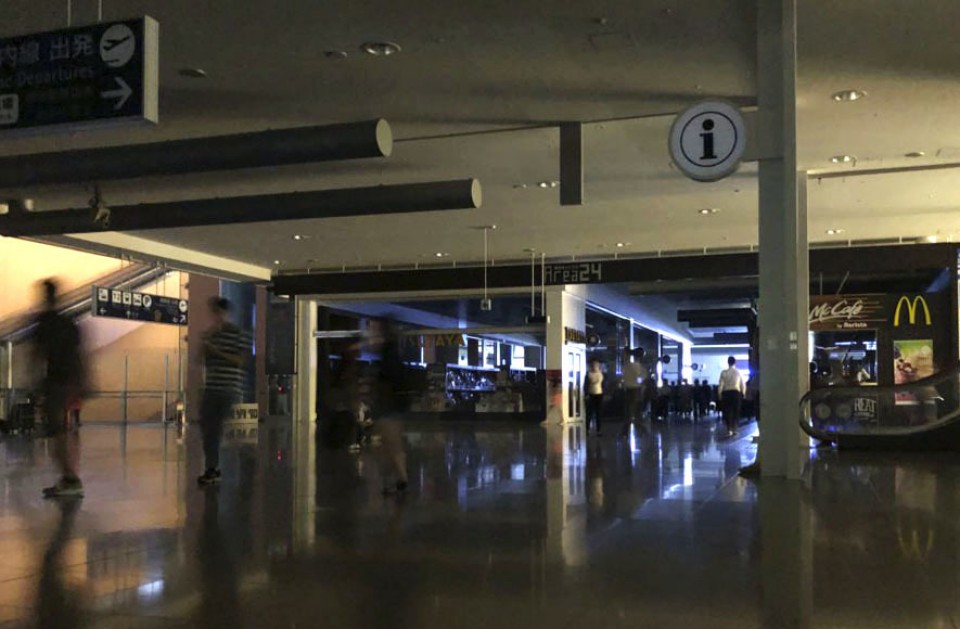 A bridge providing the only road and rail access to the airport from the mainland was severely damaged by a tanker that smashed into it after being ripped from its mooring by the strong winds and high waves.

On Wednesday, over 200 flights were canceled at the major gateway for travelers arriving from Asian countries, affecting over 30,000 people, according to airline operators.

And the number of cancelled flights is set to increase, even though the government set up a taskforce at the prime minister's office aimed at getting it back up and running as soon as possible.

An estimated 8,000 people, including airport staff, were stranded at the airport at one point, and by 7 p.m. Wednesday, only about 4,600 had been evacuated, according to the airport officials.

High-speed boats were used to ferry stranded passengers to Kobe airport across Osaka Bay, while others were transported to the mainland by buses using lanes not damaged by the ship's collision with the 3,700-meter-long bridge.

But around 2,500 people were still waiting to be whisked from the airport terminal building where food was running short, with the evacuation operation likely to continue into Thursday. 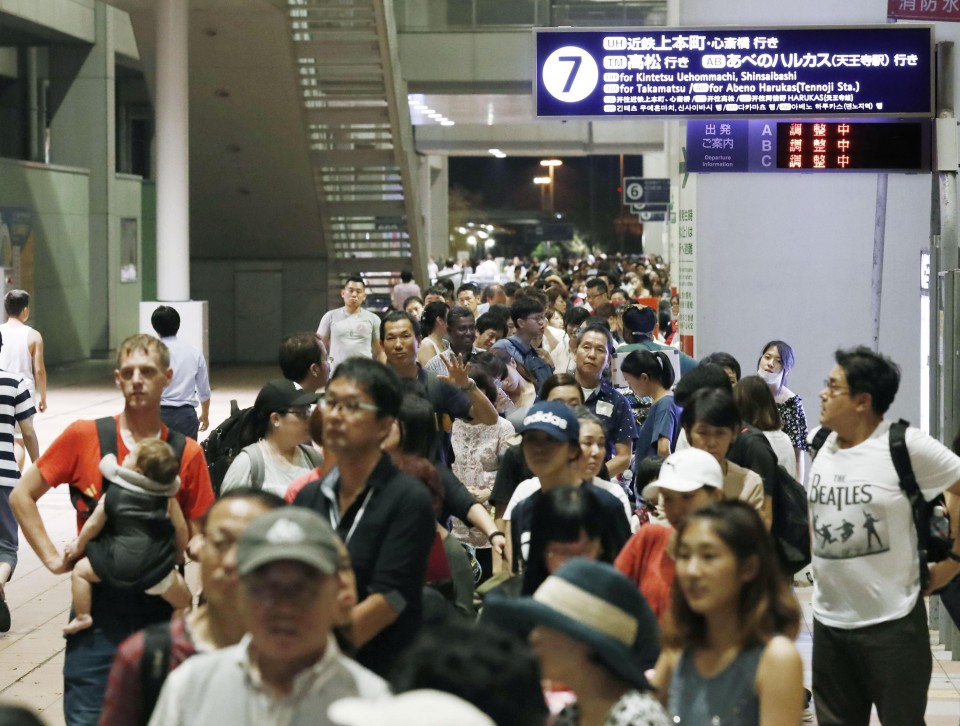 From early Wednesday morning, long lines formed at the departure points, with passengers complaining that Kansai airport was under-prepared for such a disaster.

They said air-conditioning inside the airport was not working, and an insufficient number of blankets were provided for those forced to spend the night there, forcing some to sleep on newspapers spread on the floor.

"We could not use vending machines that were supposed to work at a time of a disaster, or Wi-Fi," said 51-year-old Hideko Senoo, who was planning to fly to India with her family.

Miki Yamada, 25, who was planning to leave for Thailand with a friend, said she was forced to spend the night at an airport cafe.

"I was worried as I could not get information," Yamada said after arriving at Kobe airport on the first boat from Kansai International Airport. 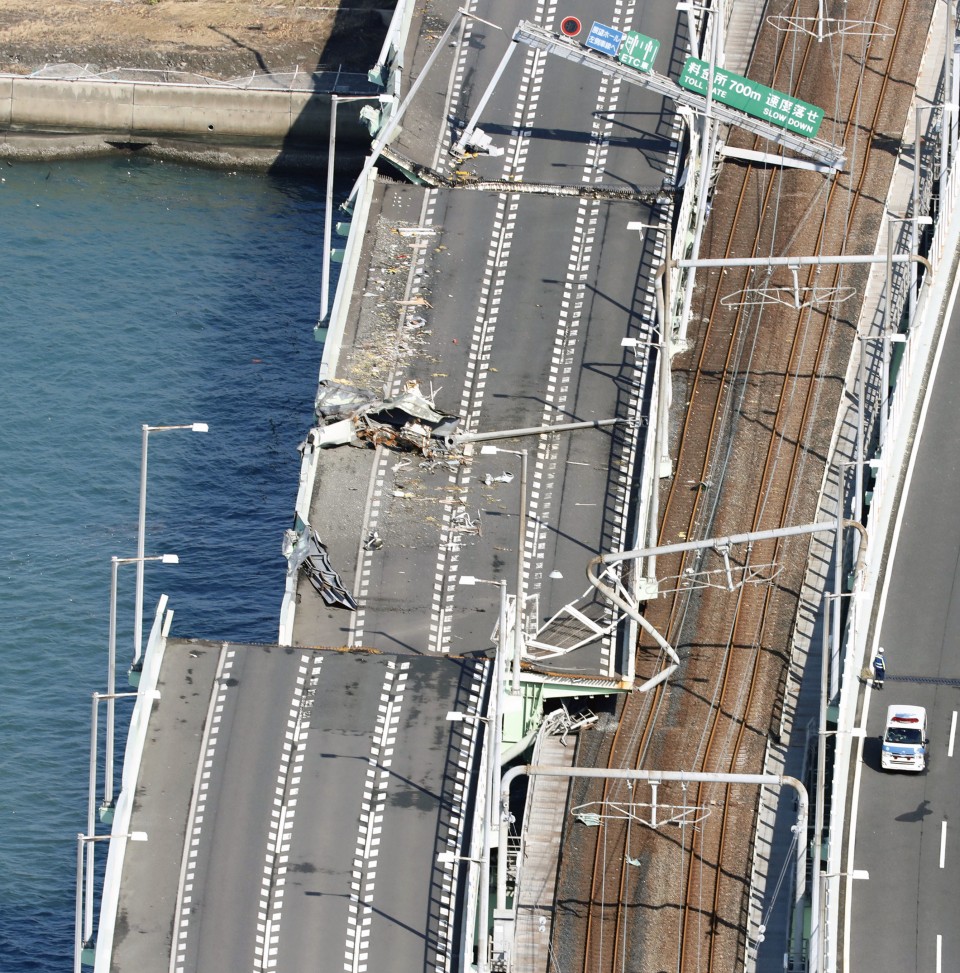 Amid uncertainty about the timing of its reopening, All Nippon Airways Co. has suspended selling tickets for flights to and from the airport until next Tuesday.

An executive of the Kansai airport operator apologized over the shutdown of the airport and confusion, saying the powerful typhoon was "far beyond expectations."

"We will make preparations so the same thing will not happen again," he told a press conference.

Early Wednesday, a tugboat towed the badly damaged 2,591-ton Houn Maru some 400 meters away from the airport bridge, revealing the severed road on the southern side of the bridge. 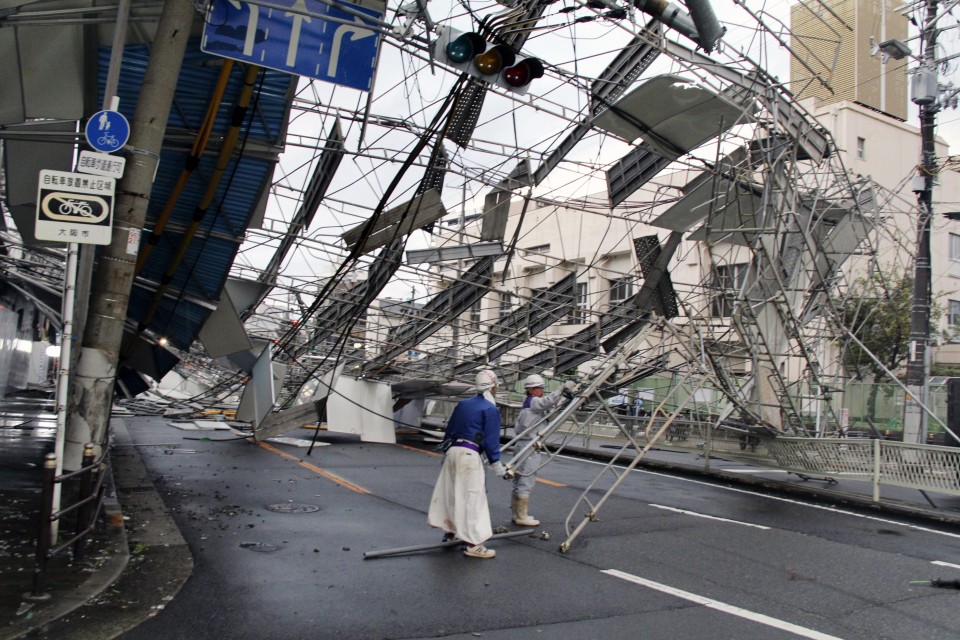 The government's Japan Transport Safety Board is expected to probe the collision with its investigators interviewing the tanker's crew.

As of 5 p.m. Wednesday, around 2.18 million households were still without power in prefectures served by Kansai Electric Power Co., the most since around 2.60 million in the aftermath of the magnitude-7.3 earthquake that devastated Kobe and its vicinities, killing over 6,000 people in January 1995.