International Olympic Committee President Thomas Bach said holding the Tokyo Games amid the coronavirus pandemic meant a generation of athletes experienced what may have been a once-in-a-lifetime chance to compete on sport's biggest stage.

Speaking to Kyodo News one year after the closing of the Olympics which were delayed a year and largely held without spectators, Bach reflected on the unprecedented challenge posed by staging a games during a pandemic.

"The organizing committee and the IOC together gave the athletes of the world the opportunity to live their Olympic dreams, and we managed not to lose an entire generation of athletes in 206 National Olympic Committees across the globe." 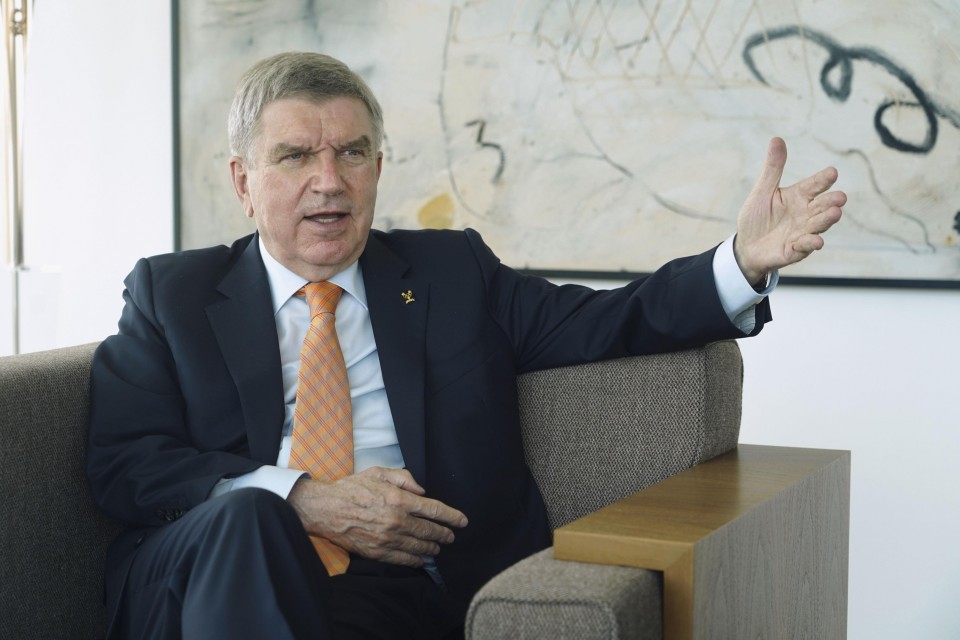 The IOC initially held off postponing the games. But Canada withdrew its athletes from the Olympics citing safety concerns surrounding the COVID-19 pandemic, while Australia, Brazil, Slovenia and Norway called for a one-year postponement.

Upon further pressure from athletes and other sports bodies, particularly the United States Olympic committee, Bach and Japan's then-Prime Minister Shinzo Abe agreed to the postponement.

The Tokyo Olympics opened on July 23, 2021, instead of the original start date 364 days earlier.

Leading up to the event, the significant levels of uncertainty required a lot of self-reflection, Bach said.

"We were waking up every morning, or woken up during the night, practically daily with a new challenge. We had to self-reflect every day," he said.

"Are we doing the right thing? Have we made the right decision? How do we address this new challenge? Can we do it? Or do we have to make drastic decisions? If we would've spoken (publically) about these things the games would have collapsed."

Bach said the most difficult time was when the IOC had to ask organizers to consider postponing the games, because he was worried his "Japanese friends" would feel insulted or misunderstand it for lack of trust when preparations were progressing smoothly and the country said it had managed to keep COVID-19 under control.

He and Abe formally postponed the Olympics on March 24, 2020.

"And then we were on. We were exactly on the same page," Bach said.

The 68-year-old German denied ever discussing cancellation plans, even though he admitted that was the easier option for the IOC financially with the guaranteed money its insurance coverage would have delivered.

"We are not working in the IOC because we want to destroy the Olympic dreams of athletes. We want them to live their Olympic dreams," he said.

Bach felt he and Abe were able to build deep mutual trust through their talks, and they were able to come to terms on "a gentleman's agreement with a virtual handshake" on a deal that had never needed to be made before in the 124-year history of the Olympics.

Japan pushed ahead with hosting the games despite strong public opposition, but Bach said that is a completely normal reaction to an abnormal situation.

"This is absolutely normal. It was not only Japanese people, there were many people around the globe (feeling that way)," he said.

In the end, organizers and Japan kept the doors shut to international spectators, including families of athletes.

Japanese fans were also denied the chance to attend Tokyo-hosted events amid surging COVID-19 cases, reversing an earlier decision to allow tens of thousands of local spectators. Some events outside of the capital permitted a limited number of spectators.

An already-running state of emergency in Tokyo continued throughout the more than two weeks of the games as the government tried to keep a lid on infection numbers.

Tokyo pulled off the most logistically-intense Olympic Games seen yet by implementing a COVID-19 isolation bubble, and that in itself is among the many legacies of the games, Bach believes.

"First of all these games will be in the history books so you know it's a legacy forever."

"Secondly, you will have very concrete legacies. We saw data that sports participation has increased, you have the sports facilities which are now becoming accessible for the population...and (future Olympic hosts) Paris, Los Angeles and Brisbane are already benefiting from all the measures taken to simplify the games."

Bach praised the Tokyo Olympics organizing committee, its local government partners, volunteers and everyone involved for their combined efforts to deliver a safe and secure games.

"When we did it, we did it together. This is why it's a historically and uniquely successful Olympic Games. I think the Japanese people can be very, very proud of this," he said.