After winning Japan's first gold medal in karate, Ryo Kiyuna said Saturday the sport's debut at the Tokyo Olympics was a big step forward in introducing its attractions to the world and believes one day it will return to the sports program at the major global event.

A day after capturing the men's kata title, Kiyuna told a press conference he was excited to compete in karate's Olympic debut, but he knew the games were different from any other tournament because of the attention he would receive. 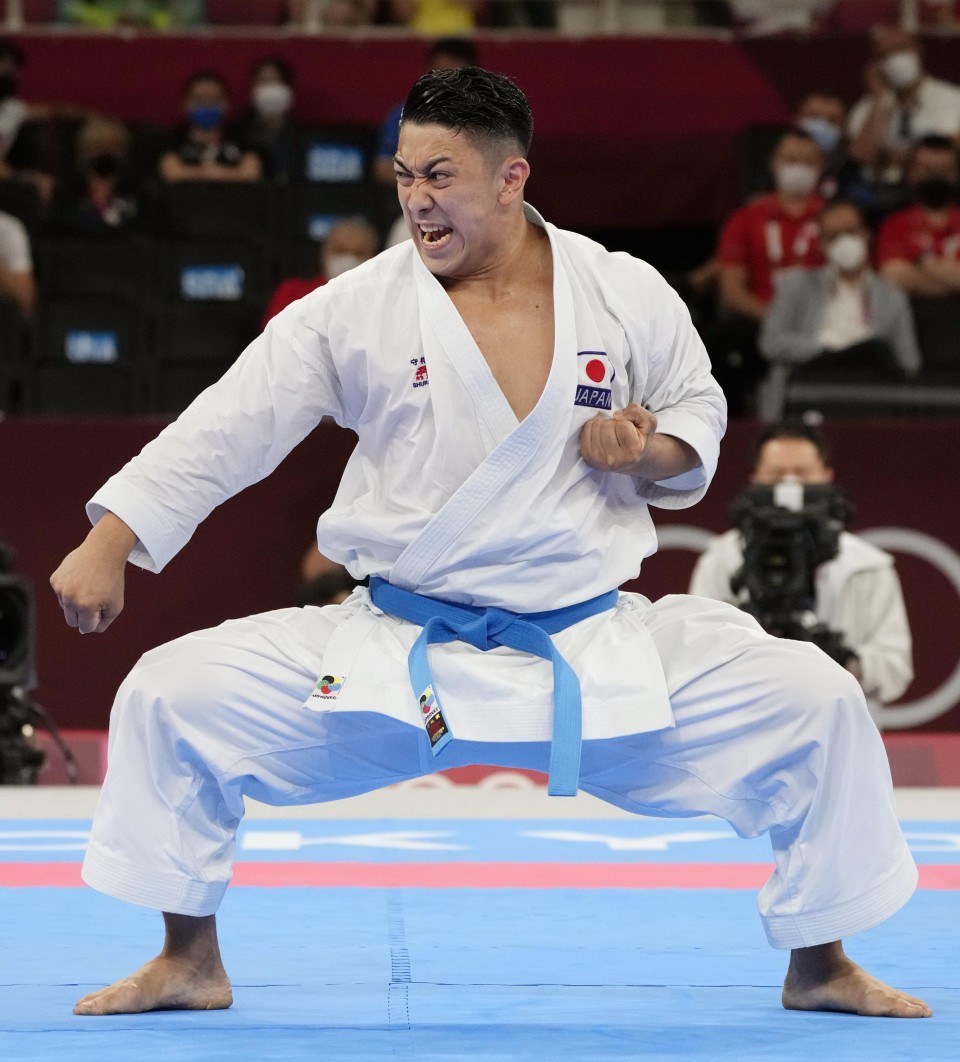 Ryo Kiyuna of Japan competes in the men's kata final bout for karate at the Tokyo Olympics on Aug. 6, 2021, at Nippon Budokan in Tokyo. (Kyodo)(TOPPAGE) ==Kyodo

"Participating in the Tokyo Olympics, I noticed (the Olympics) are a wonderful place," said Kiyuna, who is a native of Okinawa Prefecture, karate's birth place.

"We showed that the tradition of Okinawa has spread and there are karate athletes around the world," he said, adding that the athletes "made history" by promoting the sport to a wide audience at the Tokyo Games.

The combat sport is said to have originated in Okinawa during a 450-year period from 1429 under the Ryukyu Kingdom. There are now over 130 million practitioners, according to the World Karate Federation, and it is also popular in European countries like France.

But karate will not be part of the 2024 Paris Olympics and it remains uncertain what sports will be added in Los Angeles in 2028 and Brisbane in 2032, making Kiyuna's gold even more special. 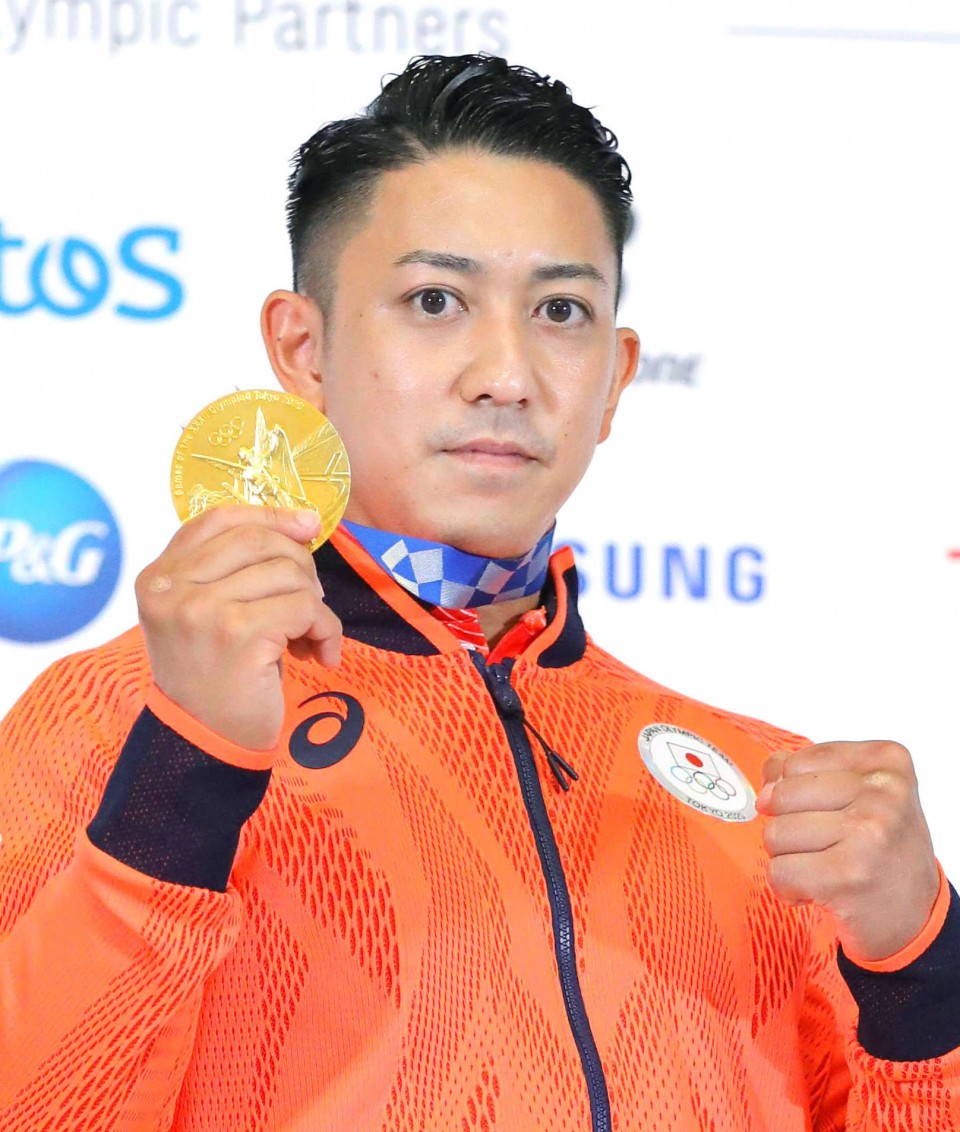 Ryo Kiyuna poses for a photo at a press conference in Tokyo on Aug. 7, 2021, holding his gold medal after winning Japan's first gold in karate. (Pool photo)(Kyodo)

During Friday's final, Kiyuna scored 28.72 points out of 30 for his performance to beat Spain's Damian Quintero by 1.06 points at Nippon Budokan, the spiritual home of Japanese martial arts.

After the judge announced him as the winner, Kiyuna moved to the center of the tatami mat and sat quietly and bowed.

During the victory ceremony, the 31-year-old Kiyuna brought a photograph of his late mother when he ascended to the podium. His mother, who had dreamed of her son winning gold at the Tokyo Olympics, passed away in 2019 at the age of 57.

"She had supported me so much since I was very young so I wanted her to see what the view was like at the Olympics," Kiyuna said after the ceremony. "I want her to know that I have kept our promise (of winning gold) so she can be at ease."

Kiyuna took up the sport at the age of 5 and has trained under his mentor Tsuguo Sakumoto, a karate legend, at his dojo in Okinawa since his final year in junior high school.

Kiyuna has not taken a single day off from karate for roughly 15 years. Because his mentor is so strict, he said he feels more nervous performing his kata in front of Sakumoto during training, than competing at the Olympics.

Kata is a series of choreographed defensive and offensive movements that target a non-existent opponent. Athletes are scored based on aspects including their technique, strength and speed.

Kiyuna, the reigning three-time world champion, has not lost a single tournament since February 2018.

"He is a great athlete and he is a great person," Spain's Quintero, who won silver, said Friday evening through an interpreter.

"He has something very special that you can see on the tatami. The whole stadium is captured and definitely the attention is on him."

While Kiyuna did not realize his goal of winning gold with a perfect 30 points, he said he wanted his performance to send a message to children in Okinawa to dream big.

"I've been working very hard toward this goal without giving up, so I hope people were able to see that it is possible to achieve their (goals) if they continue putting an effort into it," he said.

"I would be very glad if my win has inspired kids in Okinawa to have dreams and hope."