Hideki Matsuyama shot a third-round 67 Saturday and is one shot behind leader Xander Schauffele in the men's golf competition, raising hopes for a first Olympic medal for Japan in the sport.

Matsuyama, who solidified his third-place position after finishing out two holes from the weather-interrupted second round on Saturday morning, shrugged off a bogey on his first hole of the third round by sinking some crucial putts that allowed him to finish his round with five birdies and a 13-under total. 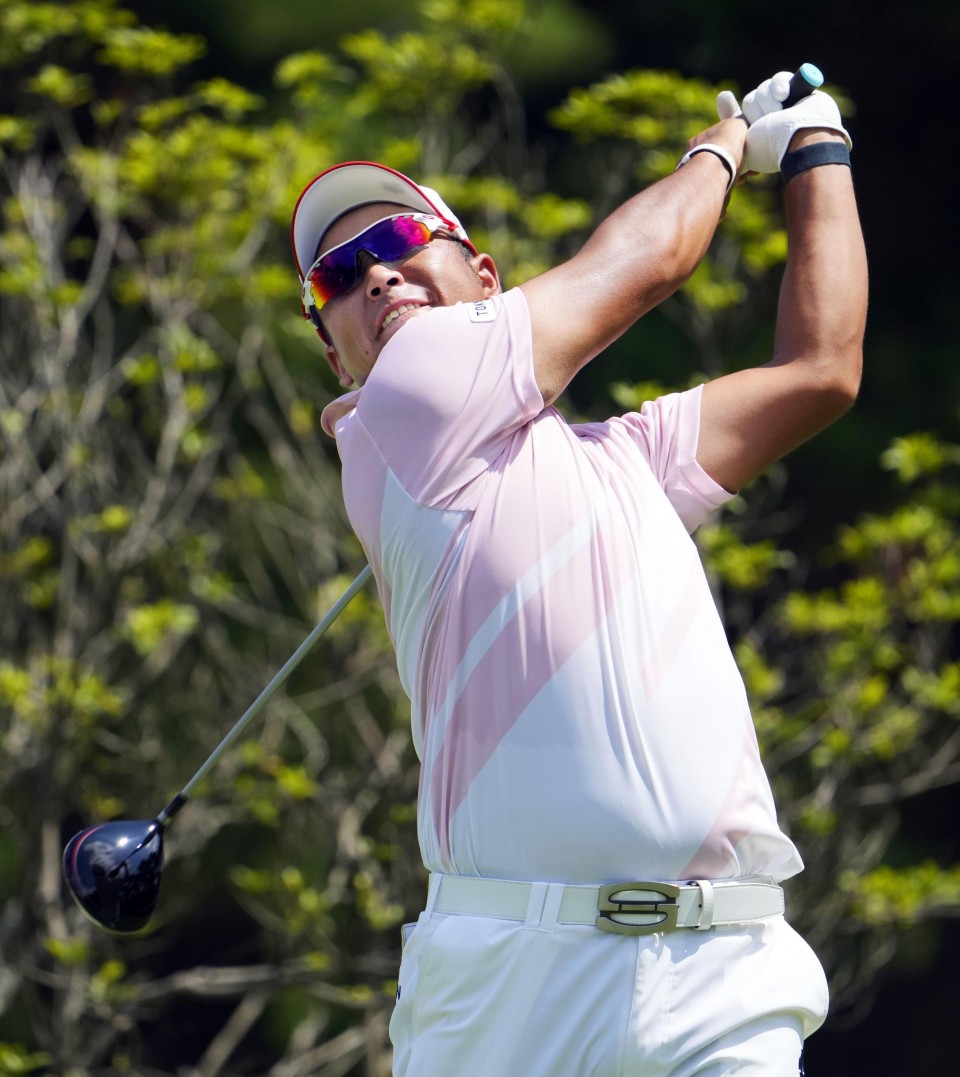 Hideki Matsuyama of Japan hits off the ninth tee during the third round of the Tokyo Olympic men's golf tournament on July 31, 2021, at Kasumigaseki Country Club in Kawagoe, Saitama Prefecture, near Tokyo. (Kyodo) ==Kyodo

Schauffele's round of 68 featured five birdies and two bogeys, backing up well from his second-round 63 that put him in contention.

Chasing the American world No. 5 and Matsuyama, who is in sole possession of second place, are Great Britain's Paul Casey and Mexico's Carlos Ortiz, both on 12-under, two back of Schauffele.

The skies were clear and blue at Kasumigaseki Country Club after multiple weather delays in the first two rounds and eventual suspension of play on Friday.

Matsuyama opened the front nine bogey-birdie-birdie, then added two more birdies on holes 6 and 8 to reach 12-under at the turn, claiming the share of the lead with his playing partners Schauffele and Ortiz.

"I got lucky with those first two birdies. I have a feeling the momentum will continue in the final round," said the home favorite and reigning Masters champion.

The 29-year-old Japanese converted eight straight pars from the ninth before a masterful bunker hole-out for birdie on the par-4 17th put him in the co-lead once again.

In Sunday's final round, he will be playing with Schauffele and Casey in the final group.

"I'm in a good position after three rounds so all I've got to do tomorrow is give it my all. I'm more concerned about playing my own game than winning a gold medal, but if I win it as a result I'll take it," he said.

Matsuyama is making his first Olympic appearance after he opted out of the Rio Games due to fears over the Zika virus.

Rikuya Hoshino, the other Japanese competitor in the tournament, has gone 71-68-73 and sits in a tie for 46th place at 1-under.

"My tee shots were terrible...I hope to get a good score and move up, even just one spot (in the final round)," Hoshino said.

The 60-man field does not include Jon Rahm of Spain or Bryson DeChambeau of the United States, the No. 1 and No. 6 male golfers in the world, respectively, or 2016 Rio Olympics champion Justin Rose of Britain.

Unlike regular pro tournaments, there was no cut, so all 60 players will play the full four rounds.