The International Tennis Federation said Wednesday it will move the daily start time of all Tokyo Olympic matches back to 3 p.m. to avoid the worst of the heat.

Citing player health and welfare, tennis's governing body said from Thursday singles, doubles and mixed doubles matches will be moved back from their 11 a.m. start time. 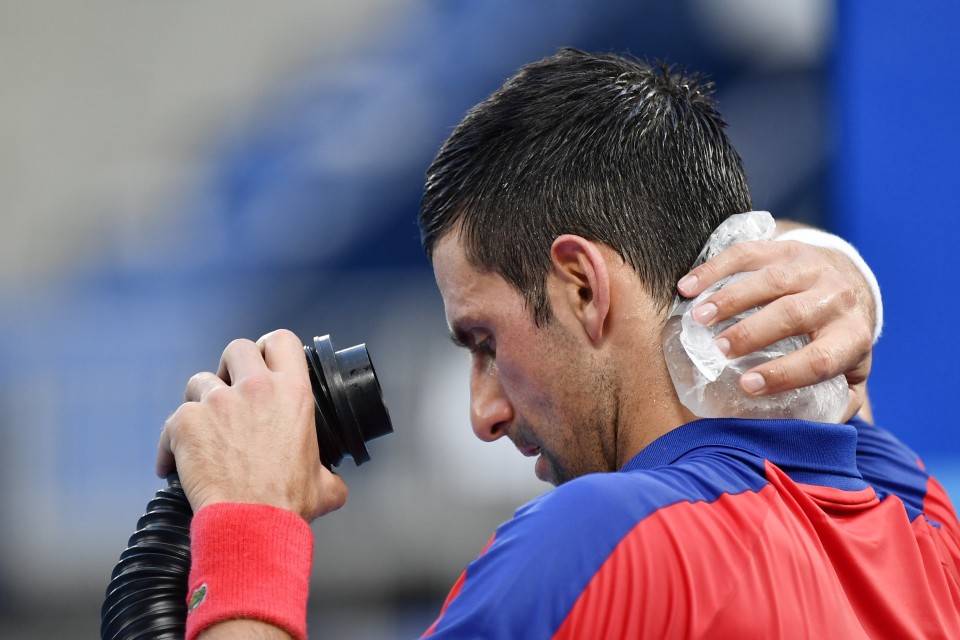 Top-ranked tennis player Novak Djokovic of Serbia tries to cool down on the bench during a men's singles match on July 28, 2021, at Ariake Tennis Park in Tokyo. (Kyodo)

The Japan Meteorological Agency has forecast Tokyo to experience daily highs of between 32 C and 33 C for the seven days from Thursday.

"The decision to start matches at 3 p.m. JST from Thursday is possible due to the outcomes of today's matches across the five competitions being staged and the size of player field, and is designed to further safeguard player health," a statement on the ITF website reads. 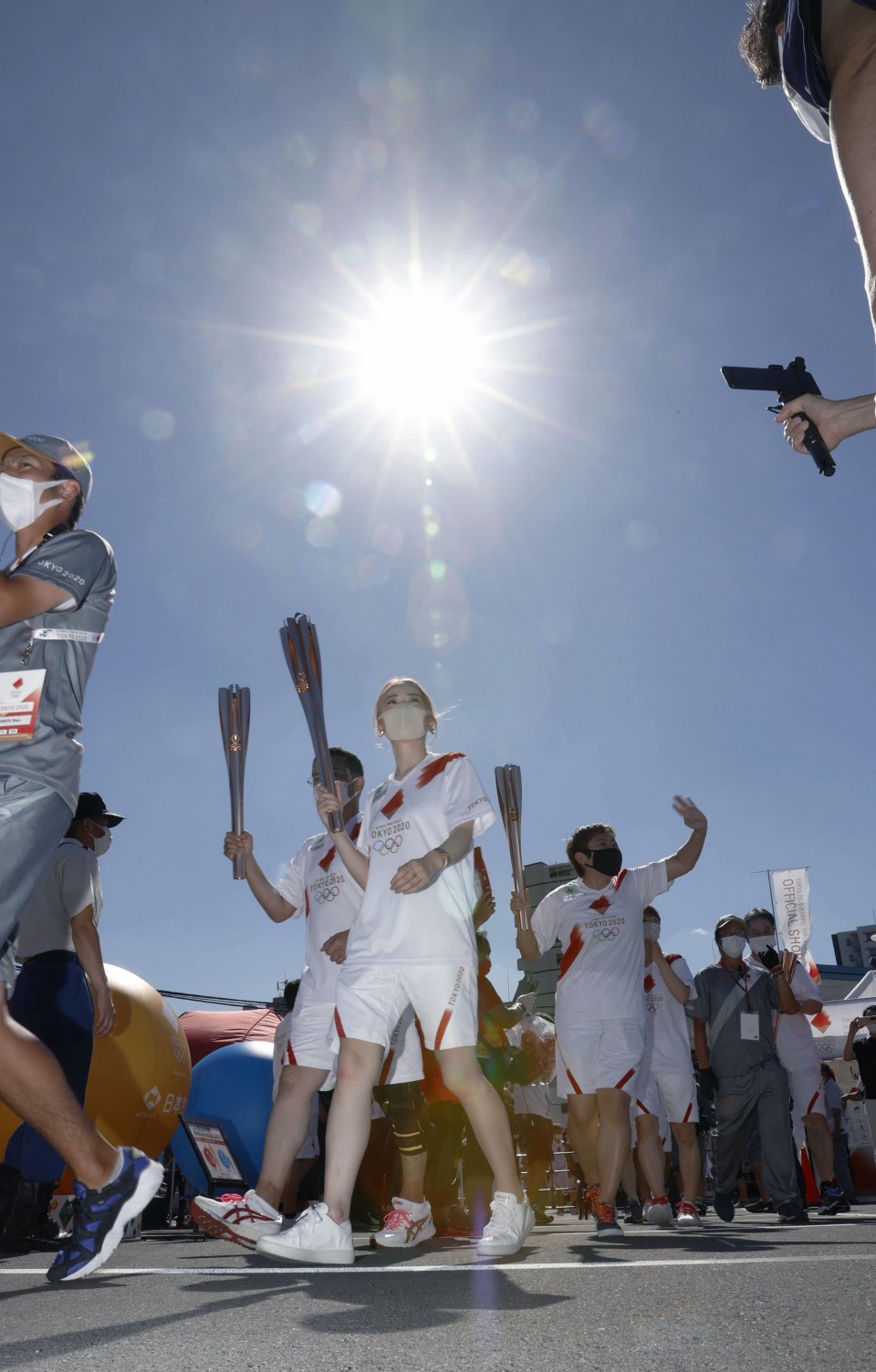 Players have been vocal about the heat and the struggles they are having, particularly due to the humidity.

Men's singles No. 2 seed Daniil Medvedev of the Russian Olympic Committee said he suffered considerable discomfort on the court on Wednesday during his third round match against Fabio Fognini of Italy.

"Even from the first set, I didn't feel good enough with my breathing. That's why I called the physio. I felt like my diaphragm had blocked. I couldn't breathe properly. I think it was the most humid day we have had so far," he said.

"Then, in the second set, I just had darkness in my eyes, like between every point I didn't know what to do to feel better. I was bending over, and I couldn't get my breathing together. I was ready to just fall down on the court."

Having had success in the heat before, most notably at the 2021 Australian Open where he finished men's singles runner up, Medvedev is not likely the first to complain, but he said a number of players have discussed the issue and change had been rumored. 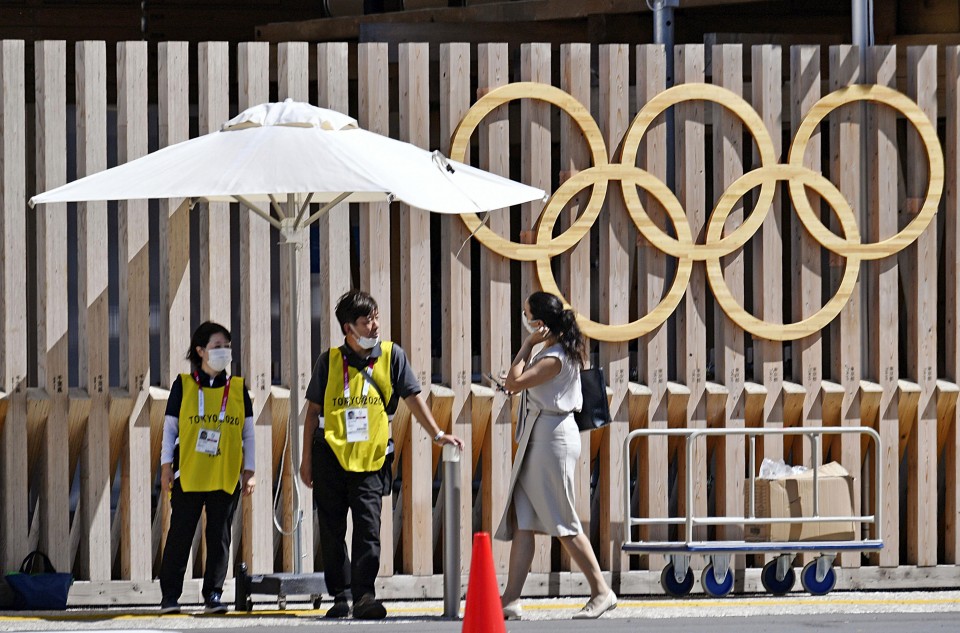 Staff members at the athletes' village for the Tokyo Olympics and Paralympics work in the Japanese capital's Harumi area on July 18, 2021, under a parasol amid scorching summer heat. (Kyodo) ==Kyodo

"All the players I know said this is not normal to start at 11. And so (Novak Djokovic) went to the ITF and talked to them, and they gave him reasons...I heard maybe from tomorrow they're going to change it, but let's see."

Olympic tennis players have regularly been seen wrapping huge ice packs across their backs and necks to try to beat the heat when sitting down at the change of ends during matches at Ariake Tennis Park.

Before the coronavirus pandemic took the headlines, Tokyo's summer heat was a major talking point and risk factor for the Olympics.

To alleviate the danger to marathon and race walk competitors, all of their events were relocated to Sapporo, on Japan's northernmost island of Hokkaido where the summer weather is normally cooler than the capital. They are set to take place over the final four days of the games.

Daily temperatures there this week are unseasonably warm, though, with Sapporo forecast to see days of 32 C almost all of the next seven days.