Sebastian Coe repeatedly returns to one theme as he discusses the success of the 2012 Olympic and Paralympic Games in London: the importance of keeping your promises to local communities.

It is advice that Tokyo should heed as it prepares to stage the 2020 games, says the man who led the delivery of the event that re-established the British capital as a leading host of major sports events. 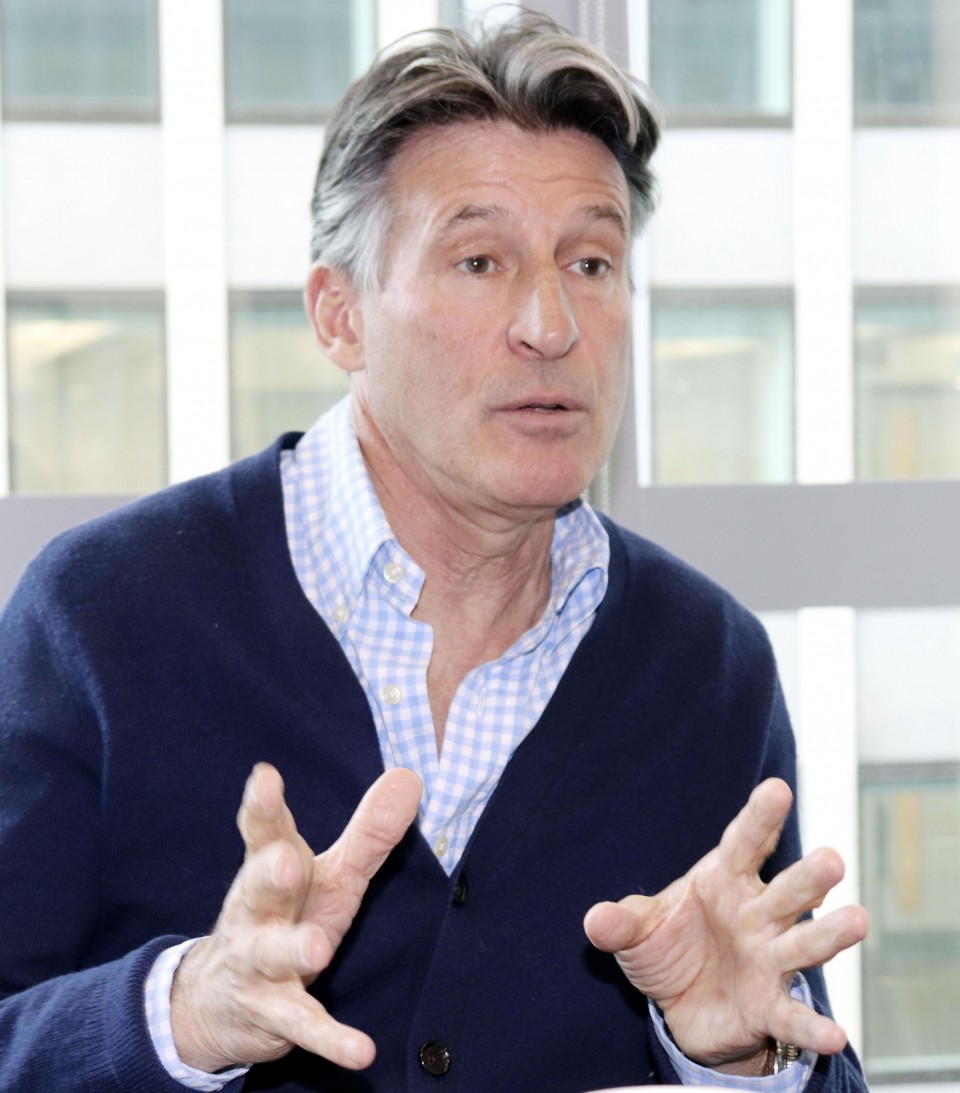 (Sebastian Coe, president of the International Association of Athletics Federations, gives an interview in London on April 29, 2019.)

"Keep your promises. Don't play fast and loose with commitments you make during the bid because they are not being absorbed only by IOC members, but also by local communities," says Lord Coe when asked by Kyodo News what Tokyo can learn from London.

"If you say you're going to use the games to broaden the appeal of sport or to drive technological change or to regenerate poor parts of the city, then you better make sure you do, because the quickest way for an organization to lose its way is to start navigating around its commitments."

"Be sure you can deliver on your commitments and then stick to them," added Coe, a member of the International Olympic Committee's Tokyo 2020 Coordination Committee.

Speaking in his office in central London, the former chairman of the organizing committee for the London Olympic and Paralympic Games said the event had a "profound" impact on U.K. society, from regenerating the deprived London borough of Newham and safeguarding jobs during the global economic crisis of 2007-2008, to creating an 11 billion-pound ($14.4 billion) dividend for the U.K. economy.

As he looks to Tokyo, Coe, now president of the International Association of Athletics Federation, has a particular interest in the post-games use of the new Tokyo Olympic Stadium. In an echo of the controversy that surrounded the future of the London Olympic Stadium, there has been opposition in Japan to plans for the Tokyo stadium to become a football venue, without an athletics track.

While Coe stressed that it is not for a sports federation chief to dictate how a city should use its venues after the games, he said "there is a real appetite in Japan to host a world athletics championships in Tokyo" and made it clear the Olympic Stadium would need to be the centerpiece.

"If that component (an athletics track) is not left there, it would make it almost impossible to have a world athletics championships in Tokyo," Coe said.

"That's something that everyone else at a local level would have to consider in terms of the trade-off. But I'm very clear that no federation should be imposing a legacy on a city that local community groups, and those who have been democratically elected, should be making. But yes, if you're asking me if I want to see a track left in that Olympic Stadium, of course I do."

Coe, who won gold in the 1,500-meter and silver in the 800-meter at both the 1980 and 1984 Olympics, also addressed the issue of protecting athletes from the intense heat that can engulf Tokyo in the summer.

After an extreme heat wave killed 96 people in and around Tokyo last July, Olympic organizers moved the marathon start times to 6 a.m.

"Athlete welfare is at the heart of everything we do. It's non-negotiable," Coe said. "But you also recognize that it's the nature of the world we live in, and also -- whatever Donald Trump thinks -- the impact that climatic change is having. We need to take sport around the world, and sometimes that does mean taking sport into areas that will pose some climatic challenges."

He pointed out having the medical support in place to ensure the protection of athletes amid high temperatures is paramount.

There has also been some consternation in Japan, particularly among coaches preparing the home athletes and sports fans planning their Olympic viewing, about the number of medal events that have been scheduled for the mornings, with the importance of reaching peak TV audiences in the U.S. a major factor. Nine athletics events will be held in the morning, and Coe explained it was a balancing act.

"Of course you want people in the stadium and the domestic audience to have the best possible scheduling," he said. "But we also have to be aware that our sport covers more territories than any other Olympic sport, so it is important that we take into consideration African audiences and the Americas and the bread basket of our sport in key marketplaces."

"It is never a perfect solution when you're pulling an event together, but I think we've reached a balance."

After several potential Olympic host cities dropped out of bidding races -- often due to fears of spiraling costs -- the IOC has been at pains to redefine the bid process, stressing the need for Olympic plans to fit with a potential host city's long-term development needs, and crucially, reducing costs. Coe believes part of the problem has been event organizers not listening to local communities.

"The one thing that any organization needs to do to remain relevant is permanently be re-engineering itself and never have a tin ear to what local communities are saying," he said.

"I have sensed in the last few years that the reason cities have become a bit queasy about the games is because of the messaging, the ability to communicate the benefits of the games, the ability to properly articulate the difference between an infrastructure budget and an operational budget."

"And I think there has been an element of 'we're right, and you're wrong' -- and local communities are rarely wrong. It's the responsibility of any sporting organization -- I'm not just talking about the IOC -- to explain what you are doing and why you are doing it. It's not just about three weeks of indelible moments on the field of play, you really do have to define what your purpose is, and I sense that that's not being done as well as it should be."