North Korea touted unspecified economic achievement in 2022 despite unprecedented challenges including the COVID-19 pandemic during a recent session of its top legislature, which leader Kim Jong Un did not attend, according to state-run media reports Thursday.

The premier, however, did not elaborate on the economic achievement and said the Cabinet revealed "not a few shortcomings" in last year's struggle to implement the decisions of the ruling Workers' Party of Korea. Those shortcomings were not specified.

The North's economy has been hit hard by the coronavirus pandemic, natural disasters and international economic sanctions designed to thwart Pyongyang's nuclear and ballistic missile ambitions. 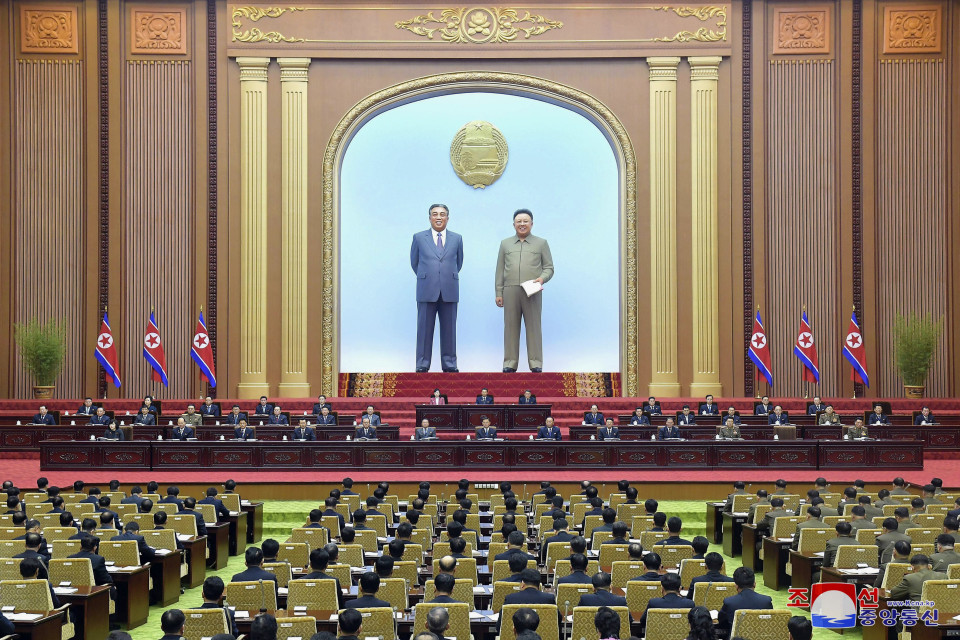 North Korea holds a Supreme People's Assembly session at the Mansudae Assembly Hall in Pyongyang on Jan. 17 and 18, 2023. (KCNA/Kyodo)

The assembly session approved state budget implementation for 2022 and expenditures for this year, with 15.9 percent of the total spent last year on "further bolstering up the war deterrence," KCNA said. The percentage of defense spending in the 2023 budget remains the same, according to the report.

The total state outlays will increase 1.7 percent in 2023 compared with the previous year. Investment in economic construction will grow 1.2 percent this year so that it will amount to 45 percent of total expenditure, the news agency said, without mentioning the actual size of the budget.

The North also earmarked spending on antivirus measures for 2023 at "as much as last year's level" on a "top-priority" basis.

In 2022, its initial budget to tackle the pandemic had seen a 33.3 percent rise on year, and the country actually spent 21.3 percent more than the original plan to respond to the virus outbreak, according to KCNA.

The legislative session also adopted a law on the protection of the "cultured" Pyongyang dialect apparently to eliminate the influence of South Korean-style speech.

Late last year, Kim Jong Un called for an "exponential increase" in the country's nuclear arsenal, highlighting the need to mass-produce tactical nuclear weapons, as well as the development of a new intercontinental ballistic missile system.

In 2022, the North launched missiles, including ICBMs, on a record 37 occasions in defiance of U.N. Security Council resolutions. Fears have been mounting that Pyongyang will carry out its seventh nuclear test -- the first since September 2017 -- in the not-so-distant future.