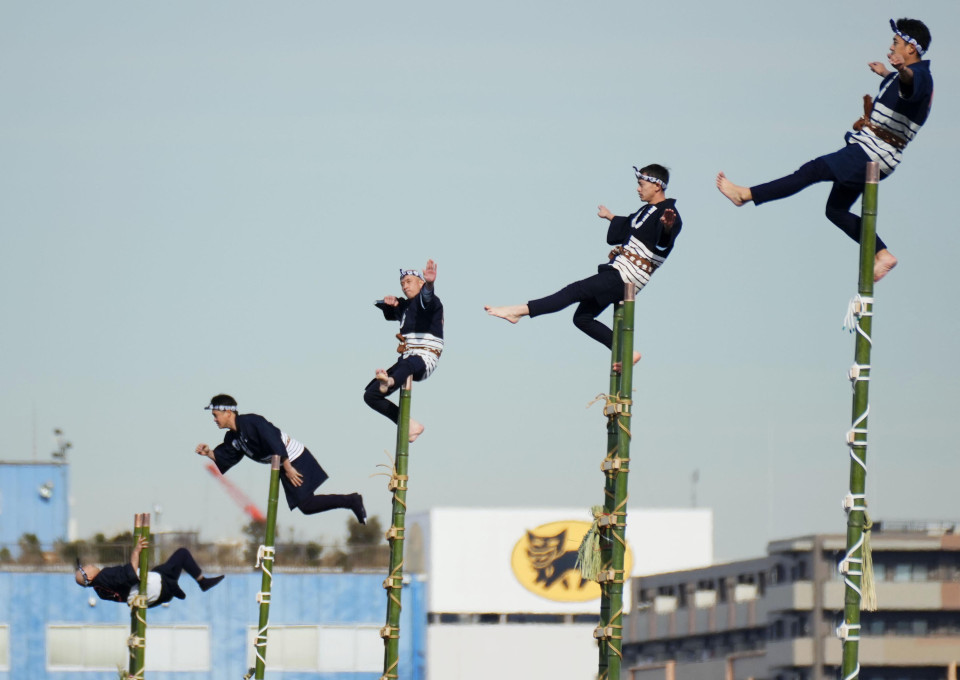 NAGOYA - A domestic flight operated by budget carrier Jetstar Japan Co. made an emergency landing on Saturday morning at an international airport in central Japan following a bomb threat, according to the transport ministry, but no explosive device has been found by police.

Five passengers sustained minor injuries while evacuating via the airplane's inflatable slide following its arrival in Chubu Centrair International Airport in Aichi Prefecture at around 7:40 a.m. No one was hospitalized, according to the airline operator.

WASHINGTON - The United States and Japan on Friday agreed to accelerate efforts to address forced labor and other human rights violations in supply chains through the launch of a task force between the governments of the two countries.

The task force, to be co-chaired by the Office of the U.S. Trade Representative and Japan's Ministry of Economy, Trade and Industry, is expected to serve as a platform for information sharing between the two countries and facilitate dialogue with businesses as the United States increasingly moves to crack down on forced labor in China.

BEIJING - The leader of Komeito, the junior coalition partner of Japan's ruling Liberal Democratic Party, is set to forgo a visit to China tentatively planned for this month, several sources familiar with Japan-China relations said Friday.

Natsuo Yamaguchi's plans may have been affected by Tokyo's recent tightening of border controls on visitors from mainland China amid a surge of coronavirus infections in the country after Beijing significantly relaxed its strict antivirus measures last month.

WASHINGTON - Japan's recent decision to significantly increase its defense budget and acquire long-range strike capabilities should not be deemed as a "threat," a U.S. State Department spokesman said Friday, with concerns lingering that Japan's move could trigger an arms race with China.

Reiterating that Washington applauds Japan's commitment to "modernize" the bilateral alliance through increased investment and enhanced capabilities, Ned Price said Tokyo's intention is to advance "a free and open Indo-Pacific," a vision that the United States also shares.

The new drug, lecanemab, removes a type of protein called amyloid beta, considered the cause of the disease. The U.S. Food and Drug Administration granted fast-track approval to the drug as it awaits further data to confirm the treatment's clinical benefits, a step paving the way for full-fledged approval.

WASHINGTON - Republican Kevin McCarthy was elected U.S. House of Representatives speaker on the 15th round of voting early Saturday, following days of deadlock amid resistance from several of his party's far-right members close to former President Donald Trump.

The latest contest for the speakership became the longest in 164 years, according to U.S. media.

TOKYO - Japan and Ecuador on Friday pledged to work together closely to strengthen the U.N. Security Council as new nonpermanent members, the Japanese government said, as the world body struggles to deal with Russia's invasion of Ukraine.

At their meeting in Ecuador's capital Quito, Foreign Minister Yoshimasa Hayashi and his Ecuadorian counterpart Juan Carlos Holguin also agreed to cooperate in realizing a rules-based, free and open global order, according to the Foreign Ministry.

TOKYO - Services were suspended on a portion of Tokyo's busy Yamanote loop line Saturday due to track-switching construction work at the busy Shibuya Station, with the disruption to last the whole weekend.

Services on the "outer loop," or clockwise direction, between Osaki and Ikebukuro stations were halted from the first train, affecting around 530,000 passengers, according to train operator East Japan Railway Co.