Collaboration between the manufacturer, set up by eight major Japanese companies, and Interuniversity Microelectronics Centre, also known as Imec, is aimed at building sustainable and long-term international cooperation on designing and making next-generation chips, according to the Japanese government. 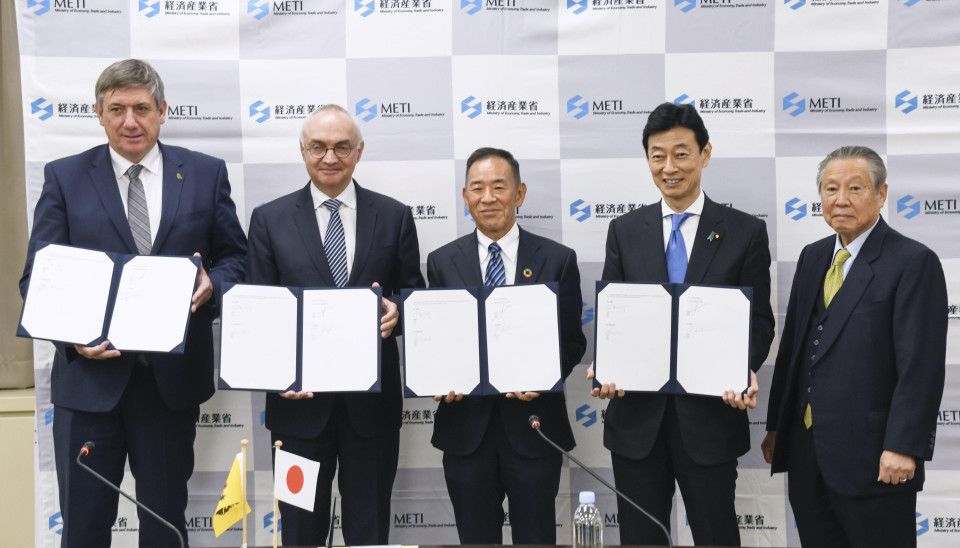 Rapidus Corp. President Atsuyoshi Koike (C) and others pose for a photo after signing a memorandum of cooperation in Tokyo on Dec. 6, 2022. (Kyodo)

Rapidus and Imec signed a memorandum of cooperation at the Ministry of Economy, Trade and Industry in Tokyo late Tuesday afternoon.

"Japan has some very unique assets in the semiconductor value chains, like material development" as well as equipment development and manufacturing, Imec CEO Luc Van den hove said after the signing ceremony, adding he is looking forward to contributing to the partnership's success.

Rapidus President Atsuyoshi Koike stressed after the ceremony that his company's goal is to create advanced chips that can contribute to a better world, but he has learned so far that it is not attainable by a single country alone.

"Our goal is to make progress through international cooperation to reach that goal" by combining the strengths of each participant, Koike said.

The Japanese chip firm has also agreed with IBM Corp. to develop advanced chips together as high-tech competition between the United States and China intensifies.

Imec is known for developing a lithography system to pattern the finest details on the most advanced chips, an essential technology in producing state-of-the-art semiconductors.

Rapidus, formed this year through investments from such companies as Toyota Motor Corp. and Sony Group Corp., aims to begin domestic production of 2-nanometer computer chips in 2027.

Industry minister Yasutoshi Nishimura said at Tuesday's event that, among other things, Japan intends to deepen cooperation with Belgium on extreme ultraviolet lithography and nurturing talents in the semiconductor industry to establish a design and manufacturing foundation for next-generation chips in the latter half of the 2020s.

The Japanese government will provide Rapidus with 70 billion yen ($510 million) in subsidies as part of its semiconductor strategy.