U.S. military officials said Friday the relocation of about 4,000 Okinawa-based Marine personnel to Guam can commence in 2024 as planned, noting significant progress in the construction of the base in the U.S. Pacific territory that will host them.

After a slowdown in the project due to COVID-19 restrictions that affected the hiring of laborers from countries such as the Philippines over the last two years, Joint Region Marianas Commander Rear Adm. Benjamin Nicholson said the base construction is "full steam again." 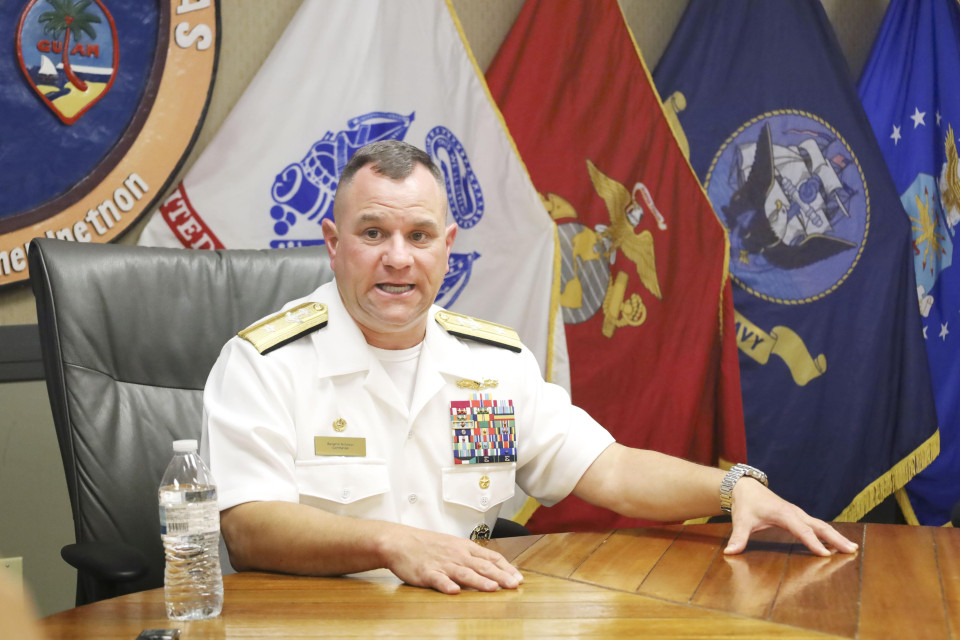 The construction of Camp Blaz is being jointly funded by the United States and Japan under a 2006 force realignment plan that partly seeks to reduce Okinawa's base-hosting burdens. The southern prefecture is home to the bulk of the U.S. military presence in Japan.

In 2012, the two countries said some 9,000 of the approximately 19,000 Marines in Okinawa will be moved outside of Japan, including to Guam and Hawaii.

Col. Christopher Bopp, the Marine base commander on Guam, said the first facilities to be completed include the cantonment, barracks and galley, after which they would commence the relocation of the personnel.

The officials spoke as Kyodo News and other news outlets saw firsthand some of these projects, which are half way through completion. It was the first time Japanese media had been granted access to the Guam base since the Marines partially activated it in October 2020, calling it Camp Blaz.

A ceremony, to which Japanese defense representatives have been invited, is set for January to formally name the base after the late Marine Brig. Gen. Vicente "Ben" Blaz, a Guam native who also served as the territory's representative in the U.S. House of Representatives.

The United States has allotted $8.7 billion for the construction, with Japan contributing up to $2.8 billion for infrastructure such as a fire station and a treatment facility inside the base.

Some Guam locals have expressed concerns over hosting a large Marine force, citing the potential environmental and cultural impact on the island, but the U.S. military maintains it is in constant communication with the Guam governor and community representatives.

Nicholson said incoming Marines may find Guam's culture, language and currency closer to home than Japan's and it will be easier for them to connect with the locals, especially when they leave the base during their time off.