Prime Minister Fumio Kishida and former U.S. President Barack Obama on Saturday called for a world without nuclear arms amid Russian threats to use them in the war in Ukraine and North Korea's rapid development of its weapons programs.

They made the call in separate messages sent to the inaugural meeting of a nuclear disarmament forum in Hiroshima, which was devastated by a U.S. atomic bomb dropped in the closing stages of World War II.

"We owe it to our children to pursue a world without nuclear weapons," Obama said in a video message to the two-day meeting through Sunday involving scholars and former government officials. 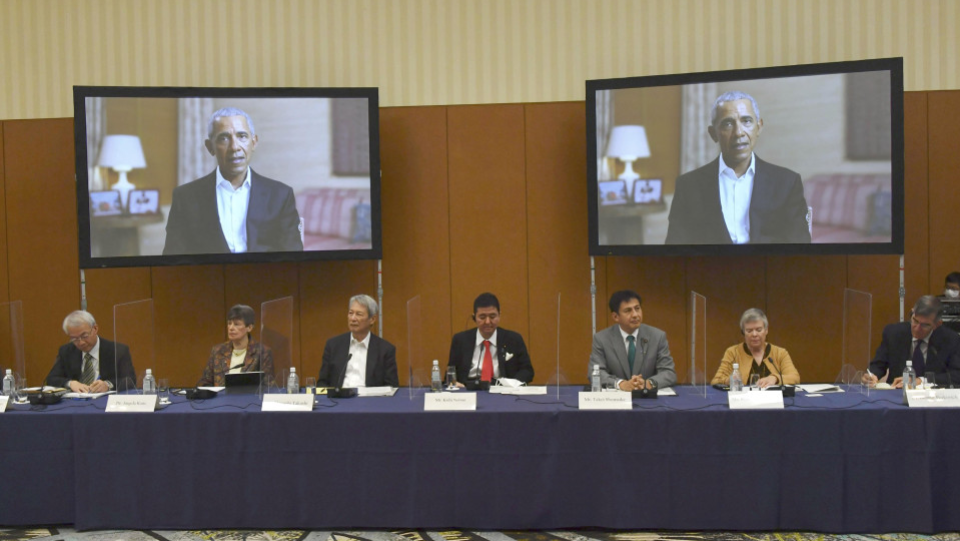 Former U.S. President Barack Obama (on screen) delivers a video message to the inaugural meeting of the International Group of Eminent Persons for a World without Nuclear Weapons in Hiroshima, western Japan, on Dec. 10, 2022. (Kyodo)

Looking back to when he became the first sitting U.S. president to visit the western Japan city in May 2016, Obama said his trip then "strengthened my own resolve to reduce the threat of nuclear weapons worldwide, and it is this same commitment that brings you all here today."

In his message, Kishida said he hopes discussions at the meeting will make "a significant step" toward the abolition of nuclear weapons and hammer out "specific ways" to realize that goal.

The world is facing the "biggest threat of nuclear weapon use since the Cold War," he said, referring to the Ukraine crisis and concerns that North Korea may carry out its seventh nuclear test and first since September 2017.

The International Group of Eminent Persons for a World without Nuclear Weapons was set up under the initiative of Kishida, a lawmaker from a constituency in Hiroshima who has pressed his vision of a nuclear-free world since taking office in October last year.

Japan will host a summit of the Group of Seven industrialized nations in Hiroshima in May.

Other figures who delivered video messages included U.N. Secretary General Antonio Guterres, who said, "Not since the darkest days of the Cold War have we heard such clear threats about their use," in an apparent criticism against Russia's nuclear threat in Ukraine.

In August, a review conference on the NPT held in New York ended without a unanimous agreement due to Russia's opposition.

The eminent persons meeting involves 15 members and is led by Takashi Shiraishi, chancellor of the Prefectural University of Kumamoto in southwestern Japan and an expert in international politics.

Among the 15 members, 12 are from 11 foreign nations -- the nuclear powers of the United States, Britain, China, France, Russia and India, and the non-nuclear states of Germany, Argentina, Jordan, Indonesia and New Zealand.