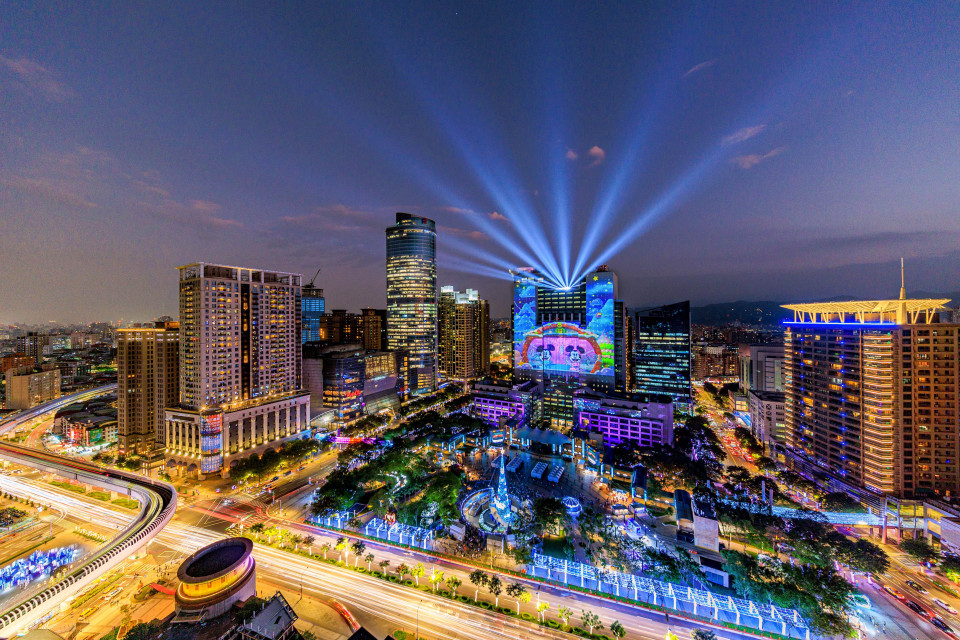 As Disney+ theme animated projections glamorously announced the start of the extravaganza, eventgoers and visitors snapped photos of adorable characters and scenes from Disney content at the New Taipei City Hall.

This year’s event has been boosted to a new level with installments inspired by characters and scenes from Disney content which are on show at the two main illumination zones.  Main areas including “Snow Town” (New Taipei City Plaza), “Silver White Forest” (Banqiao Station Square), “Pixar Classics” (Wanping Park) are in the Xinban Illumination Zone.  “National Geographic Polar Area” (Fuzhong Shopping Area) is located in the Fuzhong Illumination Zone.

In addition to over 45 illumination installations and corridors, the splendid aurora and romantic snowflakes will surely create a lasting memory. Come and be part of an overnight social-media sensation.

The statue of Olaf from Frozen is now smiling at every fun-seeker and waving his hands at the centerpiece white Christmas tree in “Snow Town.” The well-known landmark Bamboo Shoot in New Taipei City Plaza is now decorated as a vibrant Christmas tree.

Besides taking pictures with Olaf, eventgoers can gaze at the magnificent projection mapping show on the wall of New Taipei City Hall that depicts a lively and joyous Christmas scene. A huge Christmas tree with fabulous illumination installations has been erected in the city hall foyer to create the wonderful scene of a fairytale forest. Statues of Mickey and Minnie have also been installed in the forest in witty and lively poses to invite everybody to have fun at “Mickey’s Snowy Forest.”

Disney fans cannot miss the New Taipei City Plaza, where the “Disney Ice Party” pop-up store offers popular Marvel and Star Wars merchandise. Walk into the junction of Zhongshan Road and Xinfu Road next to the New Taipei City Plaza and meet the installment of the Marvel character Groot.  Adorable Groot wears a gigantic attention-seeking headset with dazzling neon lights which change color to the beat of music, warming the hearts of visitors of all ages.

Four pavements surrounding the city hall square have been designated as the “Mickey Light Zone” with bright images of Mickey, the “Minnie Light Zone” which features numerous Minnies shining in flower petal pink, the “Marvel Light Zone” which spreads the power of glittering superheroes, and the fairytale “Ice Crystal Boulevard” inspired by the movie Frozen.  The lane is decorated as an ice crystal world for eventgoers to experience the charm of a silvery Christmas.

In addition to the “Ice Palace Merry-Go-Round” that drives children crazy, unprecedentedly the “Igloo Snow Pool” brings even more thrills to Christmasland. The igloo-style building is filled with fun and artificial snow to accommodate up to 12 persons - a wonderful attraction offering an exquisite backdrop for photos. The moment you walk into the igloo, the sobering cold will take you right into an imaginative winter fantasy. Simply put on your down jacket and snap a shot in the snow scene as if you were in the Antarctic.

The “Silver White Forest” in Banqiao Station Square beckons visitors to the illumination zone with thousands of snow-white bulbs. The “Silver Party” entrance, covered head-to-toe with silver balls and a smiling Santa, welcomes all eventgoers to join this exciting party. Radiant “Crystal Sphere Igloo” is also nearby and greets visitors with below-zero temperature and a romantic snow-white winter scene.

In the “Polar Snow” zone, huts in the snow are the homes for a lovely family of snowmen. The draping of Christmas string lights comforts visitors like shining polar stars in the winter sky. The installation “Ice Floe Hut” projects fine ambient light for the endearing polar bears, and “Polar Light” breathes life into the romantic starry night sky over Taipei.

Also in Banqiao Station Square are the long-awaited free carnival rides, including “Adventure Car” and “Wonder Train,” bringing children the most joyful adventure this winter. (Please note that both carnival rides are designed for children under 12 and those under 100cm must be accompanied by their parents.)

Additionally, the Circular Line Illumination Zone “Glitzy Expectation” boasts a design inspired by snowflakes. Just walk up the stairs by the square and be embraced by gorgeously beaming snowflakes. Walk under the piers of the Taipei Metro Circular Line along Wenhua Road and bathe in lights and snowflakes.  Dubbed as “Beauty Dropping Like Petals,” rays shine elegantly like ice columns and light up your journey through this beautiful city.

From the “Silver White Forest” in Banqiao Station Square to Wanping Park, installments inspired by popular Pixar classics including Inside Out, Toy Story, Turning Red, Monsters, Inc., and Up, are in the area for all visitors to take photos and enjoy the festive vibes.

Each dazzling installation has become a popular attraction. Come and be refreshed by the touching and joyful moments with “Pixar classics.” Snap a shot with your favorite characters to make memories that will continue to melt your heart for years to come.

The “Pixar Pop-up Store,” hidden in a gigantic toy box, offers a range of Pixar merchandise for you to enjoy a shopping spree.

The Christmas Stunning Light Corridors at Christmasland in New Taipei City is a Mecca for all visitors every year.

Beaming like jewelry reflecting lights, the “Gem Corridor” on the FE21’ Footbridge is now beaming with vibrant lights.

Each unique installation renders Christmasland in New Taipei City more splendid and magnificent. This year, bring your cameras and imprint these holiday scenes forever in your memory.

In addition to the Xinban Illumination Zone, the “National Geographic Polar Area” illumination zone is also situated in Fuzhong.

Embark on a National Geographic polar exploration just outside the entrance of the Taipei Metro Fuzhong Station. The reunion scene of the “Polar Bear” family will surely kindle a sense of bliss for Christmas. Air-film structured “Iceberg” allows visitors to experience below-zero temperatures in subtropical Taiwan, while the “Snow Land” installation integrates the AI data of New Taipei City and transforms it into an artistic media show.

The “Arctic Ocean” installation simulates the grandeur of the Arctic Ocean. If you pay a visit in the daytime, take a stroll among the glamorous Arctic scenery. For night owls, the rays and beams from illumination installations create an Arctic starry sky to exhibit different charms of Fuzhong.

When marveling at these art installations, visitors and residents may also reflect on what we should do to preserve our living environment.

In this specific area, between 19:00-21:00 every day, snowflakes descend on Fuzhong on the hour. Step into the tunnel-style installation and immerse yourself in an imaginary world with interactive sensory devices. Indulge in the fun exclusively for winter 2022.