A podcast exploring the curious phenomena of "johatsu," or "evaporated people," in Japan will be released Monday by Jake Adelstein, an American investigative journalist whose bold coverage on the Japanese underworld inspired the television series "Tokyo Vice."

"The Evaporated: Gone With The Gods," co-hosted by Shoko Plambeck, a reporter and producer for podcast company Campside Media, is a nine-episode journey into an intriguing topic sometimes regarded as taboo in Japan, but that hits close to home for both hosts. 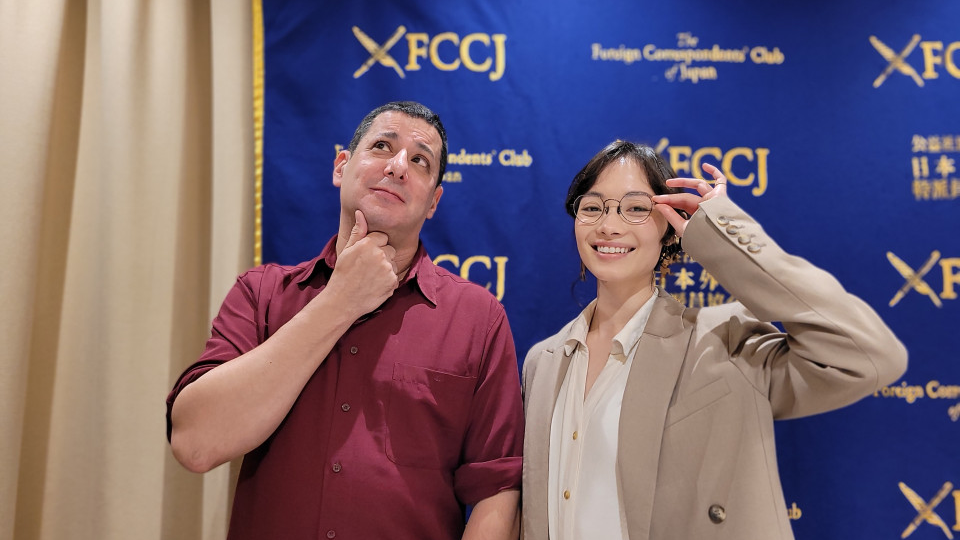 Jake Adelstein (L) and Shoko Plambeck, hosts of the podcast "The Evaporated: Gone With The Gods," are pictured at a press conference at the Foreign Correspondents' Club of Japan in Tokyo on Dec. 8, 2022. (Kyodo)

"I had a missing person I wanted to find, which is my accountant Morimoto, who took all my money and my shoebox full of receipts in 2018, and vanished 10 days before tax day," Adelstein said at a pre-release press conference at the Foreign Correspondents' Club of Japan in Tokyo on Thursday.

Adelstein, who has spent most of his career in Japan, is the author of "Tokyo Vice: An American Reporter on the Police Beat in Japan" published in 2009. The memoir, which recounts his experiences as the first non-Japanese reporter for major Japanese daily the Yomiuri Shimbun, was adapted this year into an American drama series of the same name.

Using the search of the missing accountant as a running theme, the new podcast delves into the world of disappearances in Japan where around 80,000 people a year go missing, and the interplay between police, yakuza, and private detectives.

"I think that the podcast that we did is really unique within the true crime genre because it's an anthology," said Plambeck, who as a child went into hiding with her family in Japan after her father was involved in an incident in the United States.

"It doesn't just follow one specific case, it collects all these different examples of evaporation in Japan to give you an idea of what the landscape of evaporation is like," she added.

According to data from the National Police Agency, over 79,000 people last year went missing in Japan. The lack of a photo-based identification system and strict privacy laws are believed to be the reasons why it is so easy to vanish, or even steal someone else's identity.

In episode five of the podcast, which deals with the methods used to disappear, Adelstein and Plambeck explain that of the six documents that enable people to become someone else -- local registration, national health insurance card, official seal, certificate verifying authenticity of official seal, driver's license and a copy of a family registry -- only the driver's license has a photograph.

"In society it seems very rigid and structured that so many people just take off and fade away, I just always found that a very interesting topic," Adelstein said.

While some people orchestrate their own disappearance due to fear, shame or necessity, there are also many cases that turn out to be suicides, elderly people with dementia, or even foul play.

"In Japan...there is a certain normalcy around disappearances, and that could contribute to one of the reasons why the police response on missing persons cases can be a little bit bleak," Plambeck said.

Still, with the government pushing for almost all residents to obtain "My Number" national identification cards by March 2023, this oddity of Japanese society may soon become a thing of the past.

"You could also say this podcast is about the art of vanishing, because when we're all carrying that card, it's going to be really difficult to become someone else," Adelstein said.