A U.S. national laboratory has achieved a major breakthrough in nuclear fusion technology by producing more energy than was used to derive it, the government said Tuesday, raising hopes for its potential as a clean power source.

Fusion energy is produced when light atomic nuclei are merged to form a heavier nucleus. Fusion powers the sun, and scientists at Lawrence Livermore National Laboratory in California have sought for decades to induce fusion in a lab setting using lasers.

Noting that it is the first time such a net energy gain has been achieved in a laboratory anywhere in the world, U.S. Energy Secretary Jennifer Granholm said, "(Fusion) ignition allows us to replicate for the first time certain conditions that are found only in the stars and the sun."

"If we can advance fusion energy we could use it to produce clean electricity, transportation fuels, power heavy industries, so much more," she added.

The laboratory conducted the experiment that brought the landmark result on Dec. 5, with an input of 2.05 megajoules of energy toward the target resulting in 3.15 megajoules of fusion energy output.

While welcoming the latest development said to have taken some six decades to achieve, Kim Budil, director of the lab, acknowledged at the joint press conference attended by Granholm and others that there are still "very significant hurdles" to clear before any commercialization of the technology would be possible.

"This is one igniting capsule, one time, and to realize commercial fusion energy you have to do many things, you have to be able to produce many, many fusion ignition events per minute," she said.

It will probably not take as long as another five or six decades, but "a few decades of research on the underlying technologies could put us in a position to build a power plant," Budil said.

Fusion is among the most environmentally friendly energy sources as the process does not emit carbon dioxide, according to the International Atomic Energy Agency. Its two sources of fuel -- hydrogen and lithium -- are also widely available in many parts of the world.

Unlike conventional nuclear power plants that use nuclear fission, in which energy is released as atoms split apart, fusion does not create any long-lived radioactive nuclear waste, according to the IAEA. 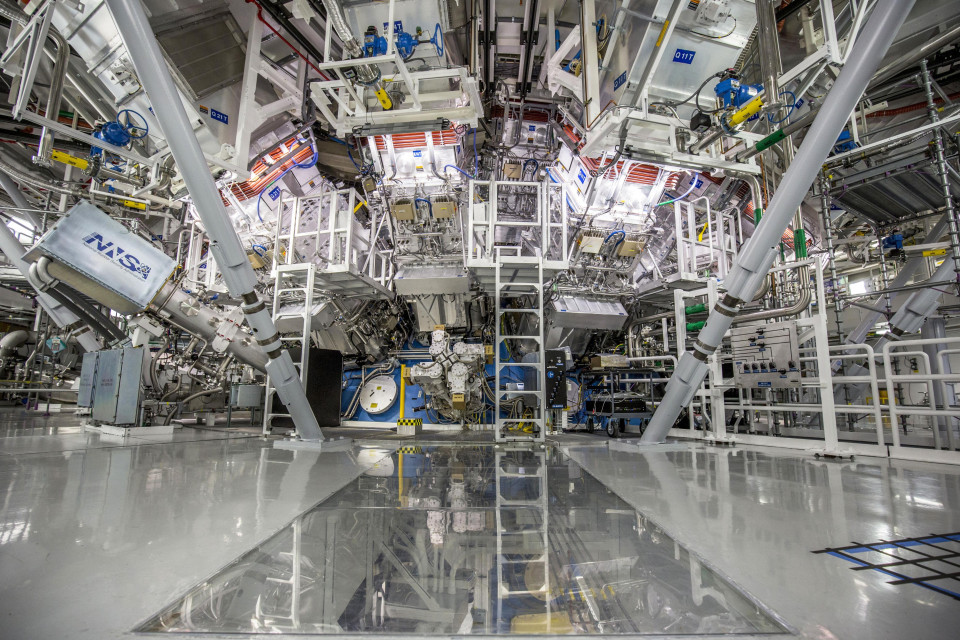 Undated photo shows a facility for nuclear fusion experiments at the Lawrence Livermore National Laboratory in California. (Photo courtesy of the laboratory)(Kyodo)