Nearly 60 percent of people in Japan were unaware of government guidance that wearing masks outdoors for protection against the coronavirus is unnecessary in most cases, recent survey results have shown.

Although the guidelines were issued in May and the government's position on mask-wearing has since remained unchanged, the survey found that 18.4 percent of respondents had no knowledge the guidance even existed, while 40 percent knew of it but not the specific details, according to data by polling firm Laibo Inc.

Compared with the 58.4 percent overall who were unaware, 41.6 percent said they knew of the guidance and its content, according to the survey. 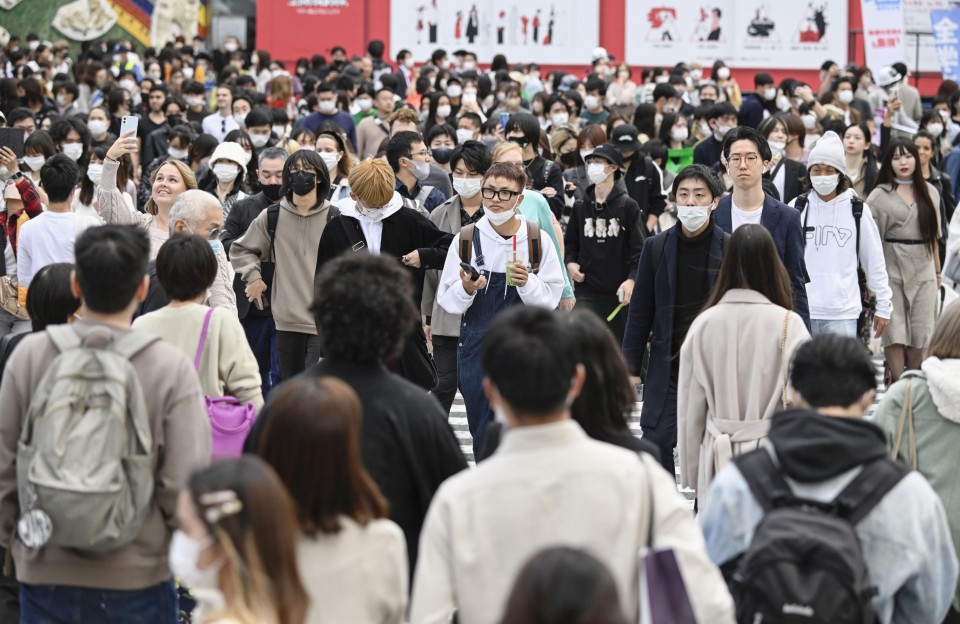 Wearing a mask remains the norm in Japan, despite 72.7 percent saying they are in favor of dropping the practice. Among the respondents, 33.9 percent said they were in favor of shedding masks, while 38.8 answered they were "somewhat" in favor.

The survey conducted online from Oct. 12 through 17 garnered sample responses from 1,011 working adults, with 52.5 percent saying that government explanations on guidance have been insufficient, including information that mask-wearing is also optional in quiet and spacious indoor areas.

Among the reasons why people favored mask-wearing, some cited the ongoing pandemic and coronavirus-related deaths. Others said they wear a mask for protection against influenza in winter and hay fever in spring as well as COVID-19.

Coronavirus cases have been recently rebounding throughout Japan.

Meanwhile, some responded that they were now "uncomfortable" taking their mask off in public as they have been accustomed to wearing masks for more than two years.

While Japan no longer has an official mask mandate in place, some respondents said they would be more encouraged to stop wearing masks if the government issued a uniform rule on their usage.

Masking up is still commonplace in other Asian countries such as Singapore and South Korea, despite their governments fully lifting outdoor mask mandates in March and September, respectively.

In China, which still has a strict "zero-COVID" policy in place, people are asked to wear masks on subway trains and in shopping malls.

In contrast, some Western nations were quick to forego masks due to the improving pandemic situation in many parts of the world.

Some survey respondents felt that Japan should keep in step with other countries, with the increase in international arrivals due to borders reopening to individual foreign tourists.

The 30-year-old said people "knew pretty quickly" that wearing a mask was no longer mandatory thanks to "really clear messaging" from the authorities through social media as well as on television.

On making sense of mask etiquette upon arriving in Japan, Barter said "it was not made clear at all," eventually assuming it would be best to wear one by observing those around him.

"It was announced as we landed that you need to wear (a mask) on the train and in the airport terminal, and that was the last I heard of it," he said.