The leaders of the Association of Southeast Asian Nations agreed in principle to admit East Timor as the 11th member of the group at their summit in Cambodia on Friday while continuing to struggle with the most pressing issue of Myanmar's prolonged political crisis.

The agreement between the leaders of the 10-member ASEAN comes more than a decade after East Timor applied for membership in 2011. East Timor is granted observer status at all meetings until it joins the bloc, a joint statement said. No specific timeline for accession has been set. 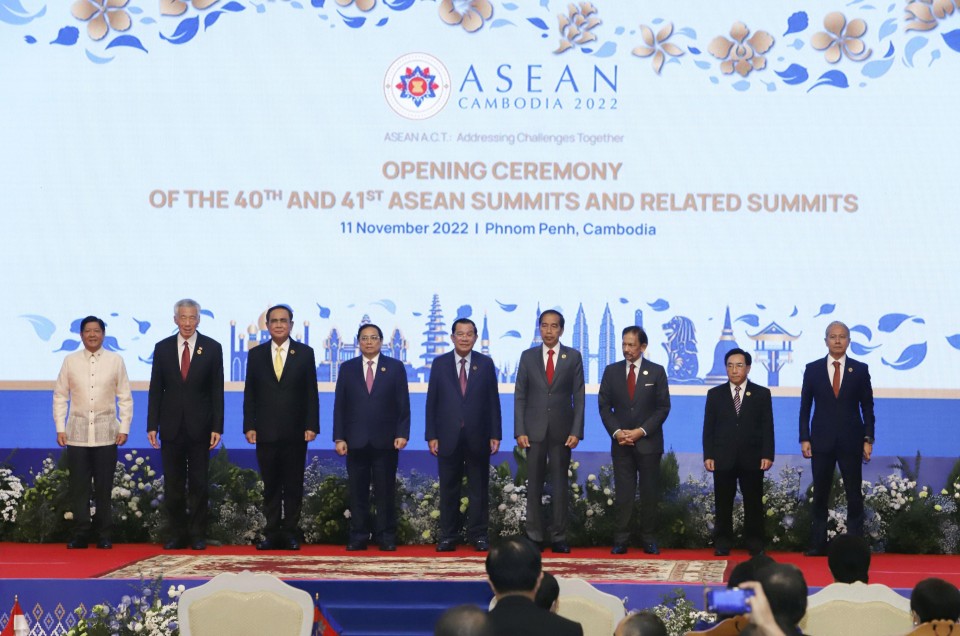 Leaders of the Association of Southeast Asian Nations meet in Phnom Penh, Cambodia, on Nov. 11, 2022. (Kyodo)

Singapore was previously the most reluctant to admit East Timor, but current ASEAN chair Cambodia and Indonesia, which will chair the bloc next year, strongly supported its membership. Singaporean Prime Minister Lee Hsien Loong expressed support for East Timor's membership at the meeting, the Singaporean government said.

Cambodian Prime Minister Hun Sen, the current chair of the grouping, called on ASEAN countries in an opening speech to focus on "maintaining our unity, solidarity and centrality" as the region faces an uneven economic recovery from the coronavirus pandemic and the impact of the Russia-Ukraine war.

"We have come a long way as a regional organization, as a family and as brothers and sisters," he said. 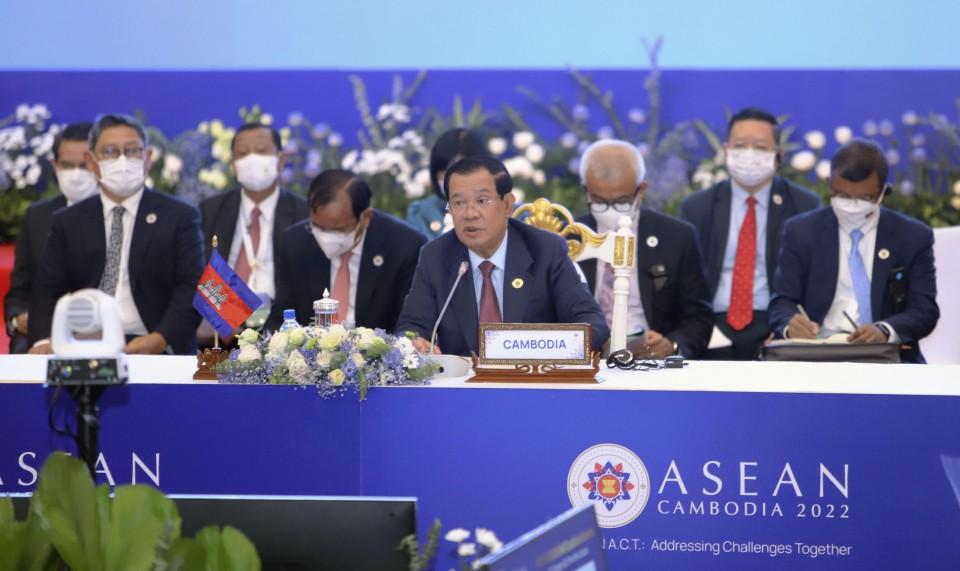 Cambodian Prime Minister Hun Sen (C) speaks at a meeting between leaders of the Association of Southeast Asian Nations in Phnom Penh on Nov. 11, 2022. (Kyodo) ==Kyodo

Myanmar, however, is not taking part in the meeting as host country Cambodia has stood by the ASEAN position that the junta, which seized power in a February 2021 coup, should only send a nonpolitical representative. Myanmar has strongly opposed that idea.

ASEAN has been urging Myanmar to follow up on the regional grouping's so-called five-point consensus agreed upon by leaders, including Myanmar junta chief Senior Gen. Min Aung Hlaing last year, including an end to violence against the junta's political opponents and civilian protesters "through concrete, practical and time-bound actions."

The leaders agreed Myanmar must implement the five-point consensus on a set schedule, a separate statement on their assessment of the country's commitment to the roadmap said.

"There is a need for an implementation plan that outlines concrete, practical and measurable indicators with a specific timeline," it read.

"Considering the situation in Myanmar remains critical and fragile, with growing violence as a major concern which affects not only Myanmar but also ASEAN's community-building efforts, ASEAN is committed to assist Myanmar in finding a peaceful and durable solution to the current crisis."

ASEAN sources said the group's foreign ministers made several recommendations to their leaders after a special meeting in Myanmar last month, including widening the policy of allowing only nonpolitical representation from Myanmar to other meetings outside the summit and foreign ministerial meetings.

The ASEAN leaders "tasked the ASEAN Coordinating Council to further review Myanmar's representation at ASEAN meetings, if the situation so requires" while maintaining the country's nonpolitical representation to the summits and foreign ministerial meetings, their statement said.

According to the Singaporean government, Lee said during the leaders' meeting that ASEAN "should seriously consider taking further steps to send a clear signal to the Myanmar military authorities" and only allow nonpolitical participation at all ministerial meetings if no progress is seen in restoring peace and stability in the country.