An Osaka man has been arrested on suspicion of taking an online job recruitment test for another person in exchange for payment, marking the first such case in Japan, the Metropolitan Police Department said Tuesday.

Nobuto Tanaka, 28, an employee of Kansai Electric Power Co., was arrested Monday by Tokyo police for allegedly taking the online recruitment test of a credit card company for a fourth-year female university student in April. It is also alleged that he took thousands of exams for other people.

The police also referred the student's case to prosecutors Tuesday over the unauthorized creation and sharing of confidential digital information. 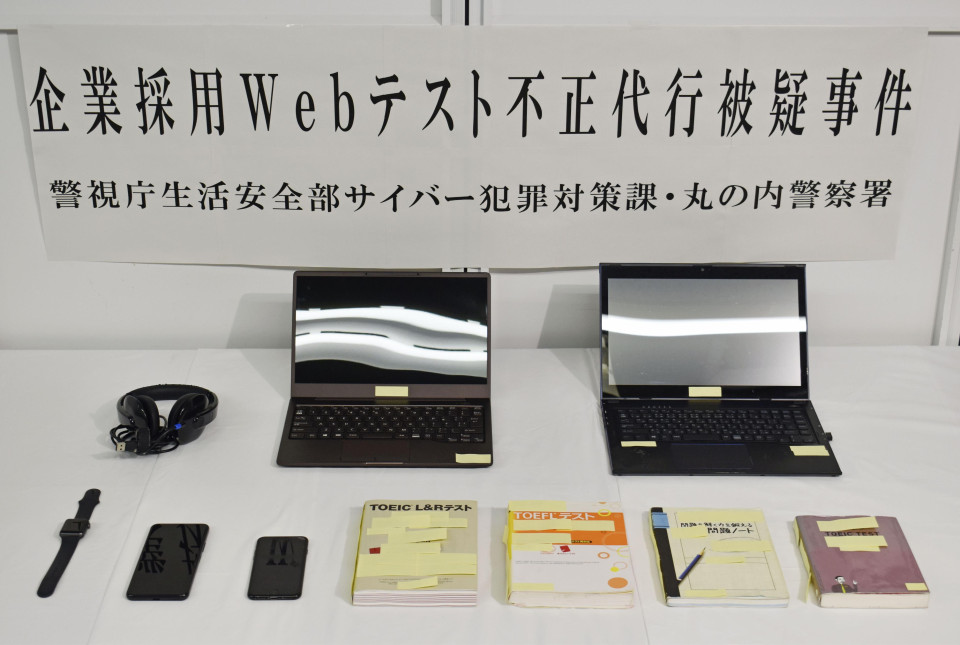 Photo taken on Nov. 22, 2022, at a police station in Tokyo shows books, laptops and other items confiscated by the police in relation to the arrest of a Kansai Electric Power Co. employee for allegedly taking an online job recruitment test for another person in exchange for payment. (Kyodo)

The arrest highlights the growing issue of cheating in online recruitment exams that have been increasingly adopted by firms in Japan in the wake of the coronavirus pandemic.

Tanaka is also suspected of having taken exams for roughly 1,000 different companies since January after receiving requests from around 300 people via social media, the police said. He has allegedly told investigators that he took around "4,000 tests since about four years ago."

Tanaka is believed to have made around 4 million yen ($28,000) this year, after charging individuals who provided details such as their exam IDs and passwords roughly 2,000 yen per subject.

He is believed to have taken tests for about 20 firms at the request of the female student and received roughly 100,000 yen in payments from her.

"At first it was just to earn some money, but I found it rewarding after students showed me their appreciation," Tanaka was quoted as saying. "I feel remorseful that I have impacted the students and companies negatively."

A graduate of one of Kyoto University's graduate schools, Tanaka apparently advertised his academic history on social media and said he had an "over 95 percent pass rate."

Kansai Electric said in a statement that Tanaka's arrest was "extremely regrettable" and his position at the company would be "strictly dealt with" in accordance with the outcome of the investigation.