Japanese to be crew of U.S.-led Moon-orbiting space station

Japan and the United States signed an agreement Friday to send a Japanese astronaut to Gateway, a lunar-orbiting space station to be built under NASA leadership, in exchange for the Asian country providing logistic transport and other support.

The Japanese astronaut put on the space station under the deal will not be landing on the Moon, however. Such a possibility is to be determined through consultations in the future. 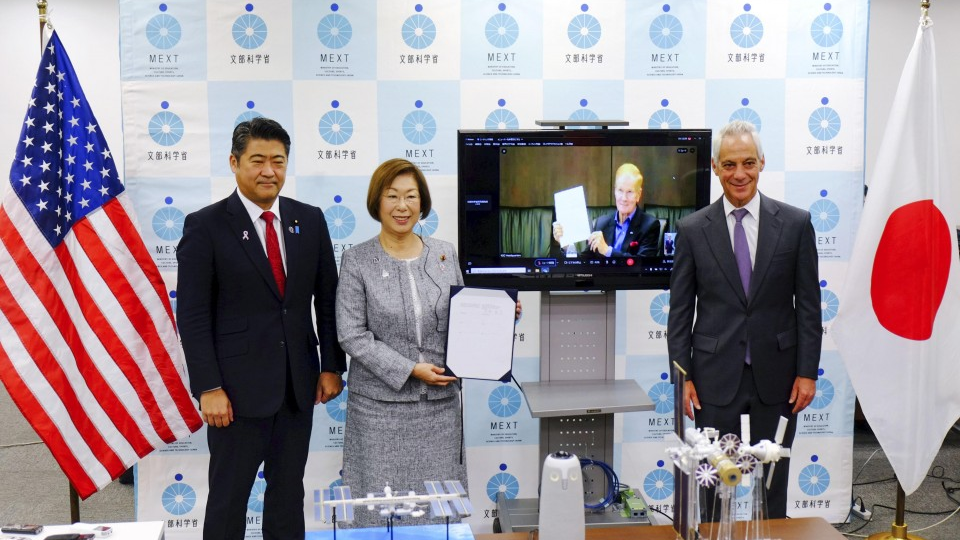 Keiko Nagaoka (2nd from L), Japan's minister of education, culture, sports, science and technology, and NASA Administrator Bill Nelson (on screen), pose for photos on the occasion of the signing of an agreement on the Gateway space program, in Tokyo on Nov. 18, 2022. (Kyodo)

Gateway is part of NASA's Artemis program, a multilateral project originally intended to return humans to the Moon by 2024. The target date for the lunar landing has been delayed with NASA hoping for 2025 at the earliest.

Keiko Nagaoka, the minister of education, culture, sports, science and technology, and Bill Nelson, NASA administrator of the National Aeronautics and Space Administration, signed the document during an online meeting.

The minister said she wanted strengthened relations between the two countries regarding lunar exploration, and Nelson called Japan an important partner.

The two countries agreed that the Japan Aerospace Exploration Agency will give support including batteries for Gateway's Habitation and Logistics Outpost module, and transport provisions using its unmanned aircraft. Japan aims to start sending 4 tons of materials from around 2030.

Japan is aiming to become the second country after the United States to land a person on the Moon.

Nagaoka also announced that Japan will extend its involvement with the International Space Station until 2030, beyond 2024 when its operation was set to end. Japanese astronaut Koichi Wakata has been on a mission at the ISS since October.

The United States had been asking Japan and European countries to extend their participation in the program. While Tokyo's continued cooperation was seen as already decided, the Japanese government was carefully considering the matter against the backdrop of Russia's invasion of Ukraine. Russia is a key player in the ISS project.