Protests against China's strict "zero-COVID" policy involving lockdowns further spread over the weekend amid a spike in infections, with demonstrators in Shanghai making a rare demand for President Xi Jinping to step down, according to witnesses and videos shared on social media.

In Shanghai, hundreds of people gathered Sunday night for a rally held for the second straight day, with participants venting their anger against authorities. They chanted slogans such as, "Down with Xi Jinping," and "Down with the emperor" in reference to the leader.

Many police officers deployed at the scene encircled the demonstrators and several of them were detained. In China, major protest movements are rare because publicly criticizing the government is considered illegal. 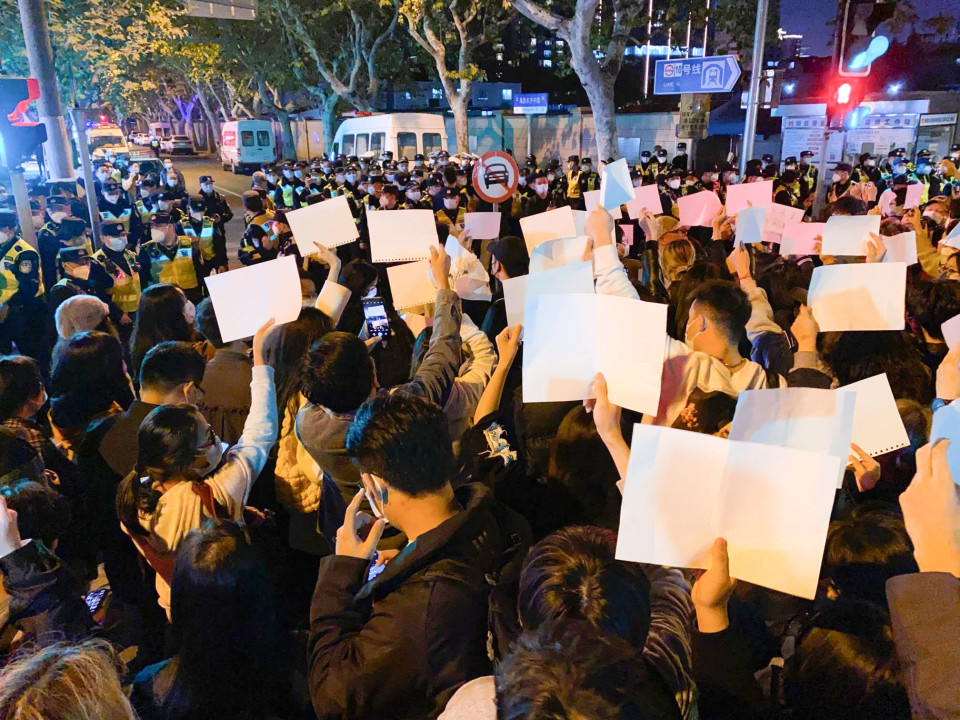 The nation's financial and commercial hub had come under a two-month lockdown earlier this year.

Many of the rallies across China were triggered by a deadly fire Thursday in Urumqi, the capital of the far-western Xinjiang region, and subsequent demonstrations in the city, with speculation growing that evacuation and rescue efforts may have been hampered by lockdown measures.

Students of Xi's alma mater Tsinghua University, an elite school in Beijing, held a demonstration Sunday to call for freedom. A candlelight vigil was also held at a Nanjing university on Saturday to mourn the 10 victims of the fire at a high-rise apartment building in Urumqi.

Protest rallies were also staged in the central city of Wuhan, where the COVID-19 outbreak was first detected in late 2019, the southern technology hub of Shenzhen, Lanzhou in the northwest and Jilin in the northeast, the videos showed.

In Shanghai, over 100 people came to a local street named after Urumqi on Saturday night, offering candles and flowers to pay tribute to the fire victims.

People also shouted their complaints about the radical anti-virus steps, rejected dictatorship and sought democracy. But police later intervened and detained some of the demonstrators, according to the witnesses and videos.

A man in his 20s who came to lay flowers on the street on Sunday said he believes the COVID restrictions are too strict as the disease is now like the flu, and deplored China's lack of freedom of speech.

As of Saturday, China had logged daily coronavirus cases of over 38,000 in the mainland, according to the National Health Commission, with the figure hitting the highest level since it began releasing data in the spring of 2020 for the fourth straight day.

In China, people in locked-down areas are banned from leaving their homes and often find it difficult to procure adequate food and daily necessities.

Facing growing public anger, the Chinese government said recently that it will refrain from implementing citywide lockdowns and instead isolate buildings where COVID cases are reported.

The leadership of Xi, who started his norm-breaking third five-year term as the ruling Communist Party chief last month, is believed to be alarmed by the spread of the protests against the zero-COVID policy and growing criticism of the government.

The Xinjiang autonomous region decided Saturday to crack down on violent acts aimed at obstructing the implementation of the anti-virus measures. A Chinese journalist said authorities might claim that "foreign forces" are behind the protests and strictly control the rallies.