A government panel on Tuesday urged "the whole nation" to shoulder a heavier burden to build up the country's defense capabilities amid growing security challenges, effectively asking for tax hikes instead of new national bond issuances.

In its proposal submitted to Prime Minister Fumio Kishida, the panel also upheld the ruling Liberal Democratic Party's contentious plan for Japan to acquire an enemy base strike capability, or a "counterstrike capability," as "essential" for enhancing Japan's deterrence. 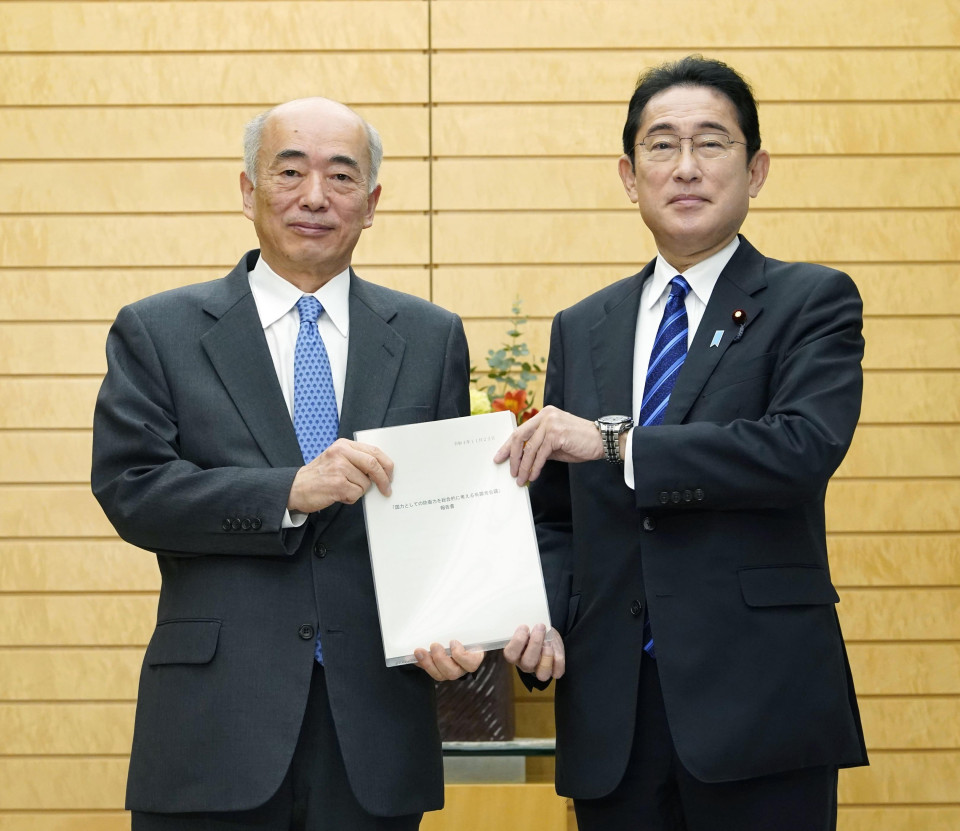 Kenichiro Sasae (L), head of a government panel on Japan's defense buildup, submits a proposal to Prime Minister Fumio Kishida at the premier's office in Tokyo on Nov. 22, 2022. (Kyodo)

Following the proposal's submission, the Kishida administration is set to ramp up discussions to revise three key defense documents by the end of this year, including the National Security Strategy, which provides the government's long-term security and diplomacy policy guidelines.

The government is scheduled to compile next month the initial budget for fiscal 2023 through March 2024.

At a meeting between the government and ruling parties later in the day, Kishida said he gained "important advice" from the panel, pledging to show specific fiscal resources needed for the larger defense budget with their scales "by the year-end."

The panel discussed whether the proposal should refer to a corporate tax hike as a possible way to fund the increase in defense costs, but ended up not doing so, said Kenichiro Sasae, who served as the chairman of the expert body.

Discussions on "what kind of tax items to be raised will be important" instead of "specifying a certain tax item," Sasae, a former Japanese ambassador to the United States, told reporters.

The updating of the documents comes as China intensifies military activities in the Indo-Pacific region. The regional security environment has also deteriorated due to North Korea's increased pace of ballistic missile tests and Russia's invasion of Ukraine.

With Kishida vowing a "substantial increase" in Japan's defense outlays, his LDP aims to double defense spending to 2 percent of GDP, a level on par with North Atlantic Treaty Organization member states.

Known for its war-renouncing Constitution, Japan has long capped its annual defense budget at about 1 percent of GDP, or over 5 trillion yen ($35 billion).

All eyes were also on how the panel concluded the argument about whether Japan should obtain a counterstrike capability.

The idea, which would allow Japan to fire upon and disable enemy missiles before launch from foreign territory and target command centers, remains controversial.

Komeito, the LDP's junior coalition partner, has shown reluctance to accept the new defense spending target and the concept of a counterstrike capability.

The panel, meanwhile, called on the government to deploy a sufficient number of missiles such as standoff missiles, or long-range missiles able to attack enemy vessels from outside their firing range, in the next five years or "as early as possible," and to purchase missiles from overseas.

The government has been considering acquiring the U.S.-developed Tomahawk cruise missile, which would put China's coastal areas and North Korea within range, according to officials.

The panel has had four meetings since its launch in September.

Japan adds 2 ships to its fleet of Aegis-equipped destroyers