Former Chinese leader Jiang Zemin, who guided China's rapid rise but was known for sowing anti-Japan sentiment among young people through patriotic education, died of leukemia and multiple organ failure on Wednesday in Shanghai, the official Xinhua News Agency said. He was 96.

Jiang, who was at the helm of the ruling Communist Party chief between 1989 and 2002, oversaw an unprecedented expansion of China's economic and military might, guiding its long march toward major power status.

But he was known for playing a role in escalating anti-Japan sentiment, especially among young people in China, as he led a nationwide patriotic education program in the 1990s. 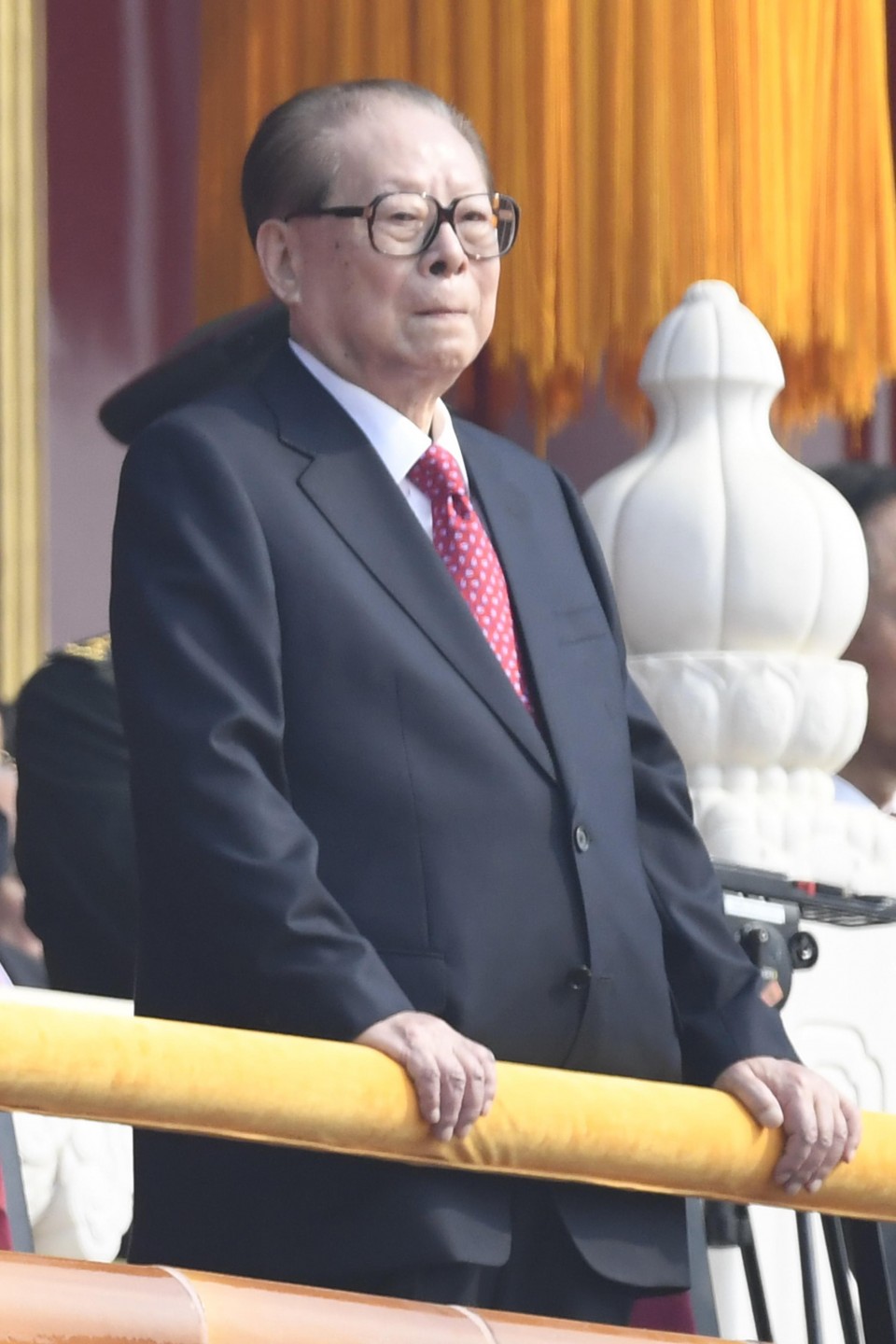 File photo of Jiang Zemin at Tiananmen Square in Beijing on Oct. 1, 2019. (Kyodo)

Jiang managed China's 2001 accession to the World Trade Organization and the nation's winning bid, the same year, for the 2008 Summer Olympics in Beijing, which were major milestones in his 13-year tenure at the apex of power.

During that time, China's economy grew at an average rate of 9 percent annually, with military spending increasing by around 15 percent each year. Jiang also presided over Hong Kong's return to China from Britain in 1997.

The former leader visited Japan in 1998 as the first Chinese head of state and had an audience with then Emperor Akihito.

Jiang said in a speech at a banquet hosted by the emperor that Japan's militarism in modern times brought disaster to the people of China and other Asian countries, and also deeply harmed the people of Japan.

His death was announced by the Communist Party, legislature, state and military bodies in a letter to the public, which expressed "profound grief" over his passing.

The letter called him "an outstanding leader of the great cause of socialism with Chinese characteristics" as well as "a great Marxist, a great proletarian revolutionary, statesman, military strategist and diplomat, a long-tested communist fighter," according to Xinhua.

The national flag at the Great Hall of the People in Beijing was flown at half-mast. Mourning halls will be set up at Chinese embassies and consulates abroad to receive condolences, the news agency said.

He was last seen in public in October 2019 when he attended the National Day ceremony to mark the 70th anniversary of Communist rule.

Jiang was handpicked to lead China by former paramount leader Deng Xiaoping, the mastermind of the nation's economic reform.

He ascended to the Communist Party's top position following the 1989 Tiananmen Square incident, taking the reins of the Central Military Commission the same year and then the presidency in 1993.

Initial expectations for Jiang, who was president until 2003, were not high.

But he quickly established firm control of the country, choosing to focus on political stability as a means of dealing with the chaotic atmosphere that arose during the transition from state planning toward a market-driven economy that had been initiated by Deng.

He was born in 1926 in Yangzhou in China's eastern Jiangsu Province and came of age during the Japanese occupation.

After graduating from a Shanghai college in 1947 with a bachelor's degree in electrical engineering, he went to work at an auto manufacturer.

Jiang later moved into government, steering the nation's electronics industry. That ministerial position led to a higher office in Shanghai, where, as mayor, he developed a power base that would eventually propel him to the country's leadership.

Jiang's insistence on stability at all costs was perhaps best represented by his aggressive persecution of Falun Gong, a Chinese religious group whose followers were targeted by the state's security apparatus following a massive 1999 protest near the government's headquarters in Beijing.

Although Jiang ruthlessly cracked down on that group, he moved to embrace another, officially welcoming the nation's business class into the Communist Party through his awkwardly named "Three Represents" policy.

The change integrated entrepreneurs and merchants, the subjects of decades of Communist vitriol, into the country's political structure, a move that some claim kicked into overdrive already endemic state corruption.

Jiang relinquished all of his leadership titles in 2005 but retained considerable influence within the ruling party for many years after that. He is said to have vaulted Xi Jinping to the vice presidency of China in 2008. Xi became the Communist Party leader in 2012.

A picture of Jiang believed to have been taken on his birthday in August this year circulated online before the Communist Party's twice-a-decade congress in October, but he did not attend the key gathering.