Tokyo authorities on Friday ordered the operator of Uber Eats food delivery service in Japan to enter into negotiations with a labor union representing its staff, agreeing with the organization that the unit of the U.S.-based company had engaged in unfair practices.

The union, formed in October 2019, had been pushing for the operator to negotiate contract terms and seek improved working conditions, but the firm had been arguing that those using the platform for work are independent contractors and, therefore, should not be regarded as workers under Japan's labor union law.

However, the Tokyo metropolitan government's labor commission acknowledged that they are part of Uber Eats' essential workforce even if they do not have employment contracts with the operator.

The rising number of people using gig economy platforms operated by tech companies like Uber Technologies or Amazon.com Inc. for work has highlighted the issue of vulnerable workers left unprotected by labor laws as freelancers.

Experts on labor issues and vulnerable workers hope the decision made by the Tokyo government's Bureau of Labor Relations Commission will improve freelancers' treatment. 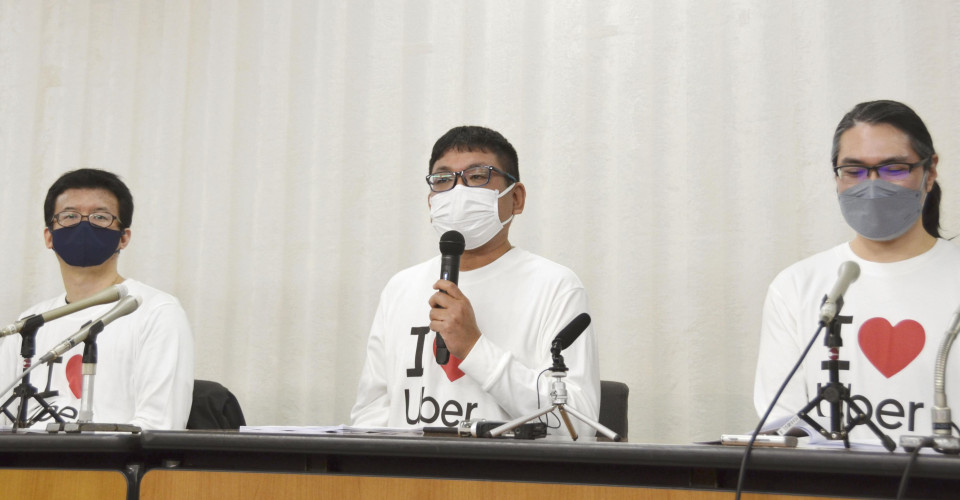 Members of UberEatsUnion, a labor union for staff of Uber Eats in Japan, hold a press conference in Tokyo on Nov. 25, 2022. (Kyodo)

The commission's directive stated that delivery staff, earning money by using the operator's platform, cannot be considered mere "clients" but are indispensable workers in an industry in which eateries and people who order food and drinks are linked through its app.

"The company has unilaterally decided the contracts' contents, and pay is characterized as compensation for the provision of labor," it said.

Moreover, it said although delivery workers are ostensibly free to choose their hours and location, they can be placed in situations where refusing work is difficult.

Delivery workers are under Uber's direction and control, it added, concluding, "It is reasonable to view that their relationship with the company makes them a worker under the labor union law."

Uber Eats Japan Inc. said in a statement, "It is very unfortunate that (the decision) does not take into account flexible and independent working styles."

The company said it will consider its response, including a possible request for re-examination.

Toshiaki Tsuchiya, the former head of the union, welcomed the commission's decision, saying, "Our claim was accepted in what was a common sense decision."

At a press conference in Tokyo, he said that the union wants to hold talks constructively and not be in conflict with the company.

Uber Eats Japan said more than 180,000 food establishments were members in July, and more than 130,000 delivery persons had worked for them more than once this year as of September.