Shin Kim of South Korea on Wednesday won the top prize in the composition division at an international competition for young musicians in Switzerland, with Japanese Yuki Nakahashi coming second, the contest's organizer said. 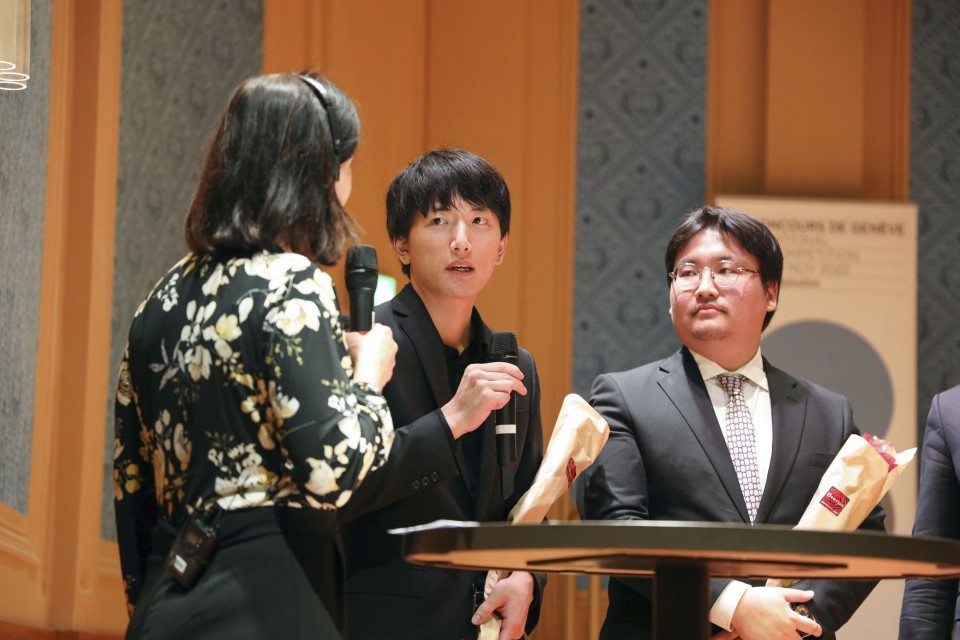 Shin Kim (R) of South Korea and Yuki Nakahashi (C) of Japan answer questions from an emcee at the Geneva International Music Competition in Geneva on Oct. 26, 2022. (Kyodo)

Nakahashi, who studied under Japanese composer Ichiro Nodaira at the Tokyo University of the Arts and now is a student at the Conservatory of Paris, also won three of the four additional special prizes awarded in the composition category, including those chosen by music students and members of the audience.

Nakahashi, 27, said he was pleased with the results. "The most impressive thing was that I was able to play with wonderful performers," he said.

Kim won the top prize for a contemporary piece entitled "The Song of Oneiroi" he composed for the contest.

"It means a lot to me to receive this prize because the Geneva competition is one of the biggest in the world. I think it is a great first step for me as a composer," he said after the award ceremony.

A graduate of the Korea University of Arts where he studied under South Korean composer Byungmoo Lee, Kim is currently a student at the Royal Academy of Music in London.

"The richness of the vocal sound quality in Kim's piece was fantastic," the chair of the jury, Beat Furrer, said. "Shouting, screaming, soft and tensed sounds, the sound range was enormous," he added.

The Geneva competition, founded in 1939 to promote young talented musicians, is considered a springboard to an international career.