Yasutoshi Nishimura, economy, trade and industry minister, visited the war-linked Yasukuni shrine on Friday ahead of its autumn festival next week, sources close to him said.

Past visits by Japanese leaders and lawmakers to the Shinto shrine, which honors convicted war criminals along with the war dead, have riled Japan's Asian neighbors as they view it as a symbol of the country's past militarism.

Chief Cabinet Secretary Hirokazu Matsuno said at a press conference Friday that Prime Minister Fumio Kishida "will decide as appropriate" whether to visit this year.

Kishida is expected to send a "masakaki" offering on the occasion of the Shinto shrine's three-day autumn festival through Wednesday but will refrain from paying a visit, people close to him said. 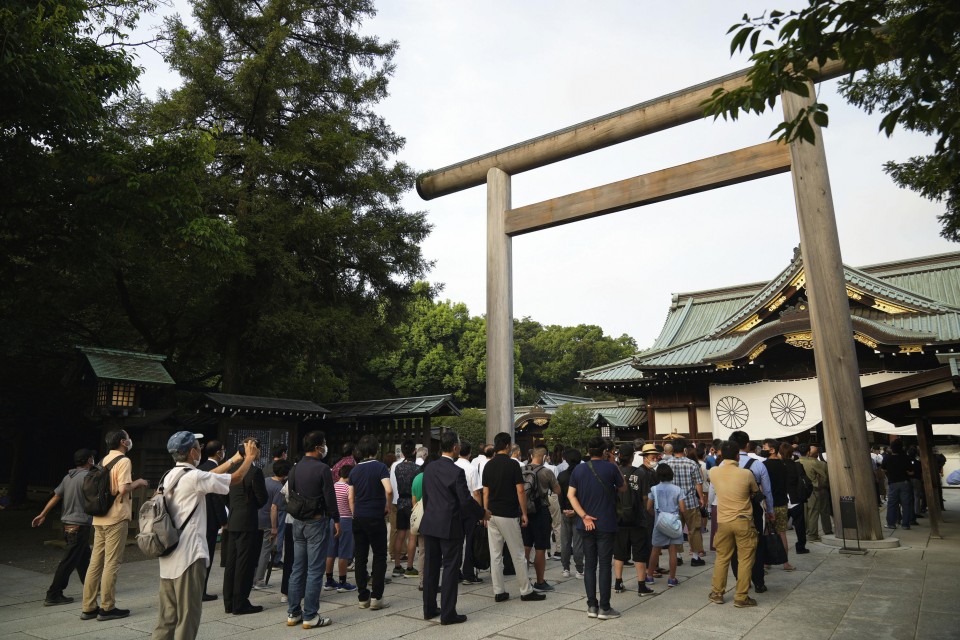 People visit Tokyo's Yasukuni shrine, seen by China and South Korea as a symbol of Japan's past militarism, on Aug. 15, 2022.(Kyodo)

Meanwhile, a cross-party group of more than 100 lawmakers said it will collectively visit Yasukuni on Tuesday. The group last visited the shrine en masse in April for its spring festival.

Japan invaded a wide area of China while it ruled the Korean Peninsula from 1910 to 1945.

In an apparent attempt to avoid confrontation with China and South Korea, recent Japanese prime ministers have only sent offerings to the shrine at the time of its biannual festivals in the spring and autumn, as well as the anniversary of the end of World War II on Aug. 15.

Sanae Takaichi, minister for economic security, visited the shrine on Aug. 15 but declined to comment on whether she would visit again next week, saying they were "private plans."

Nishimura had also visited Yasukuni in August, two days before the anniversary of the end of World War II.

Most of the around 2.5 million people enshrined at Yasukuni are military servicemen and civilian employees of the Japanese military, but wartime Prime Minister Gen. Hideki Tojo and 13 other Class-A war criminals were added to the enshrined deities in 1978, stirring controversy in Japan and abroad.