The details of the main area of Ghibli Park that features the beloved characters from Studio Ghibli's classic animation film "My Neighbor Totoro" were revealed to the press on Thursday.

The indoor "Ghibli's Grand Warehouse," which is part of the theme park set to open in the central Japan prefecture of Aichi on Nov. 1, will showcase exhibits related to movies such as the 1988 film about two sisters who befriend magical forest creatures, including Totoro, the film's titular character.

Fans will now be treated to a recreation of the Totoro world, featuring a children's playroom with a sleeping Totoro and the "Cat Bus," another iconic character in "My Neighbor Totoro."

Visitors can also sit next to the character No-Face in a train that runs on the sea in the Oscar-winning 2001 film "Spirited Away," eat snacks that appear in the films or buy original products in a shop. They can also see a recreated scene from 1986's "Castle in the Sky."

The Cinema Orion, which can seat around 170 people, will show 10 short animation films only shown in Ghibli Museum in Mitaka in western Tokyo.

"There is enough in Ghibli's Grand Warehouse for people to enjoy for two or three hours. I want everyone to see it soon," Aichi Gov. Hideaki Omura said at a press conference.

The park will also open in November two other areas in the park -- "Dondoko Forest," based on the film "My Neighbor Totoro," and "Hill of Youth" with the antique shop from the 1995 film "Whisper of the Heart." 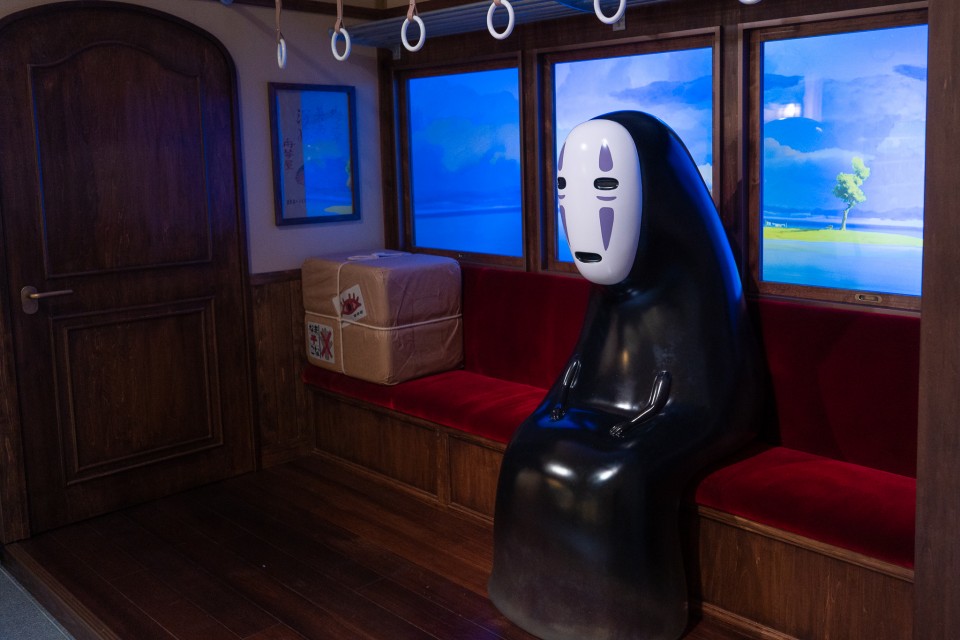 Supplied photo shows the fantastical character No-Face sitting in a train from the 2001 film "Spirited Away," at Ghibli Park in Aichi Prefecture. (Photo courtesy of 2001 Studio Ghibli・NDDTM)(Kyodo)